DS is going it alone after its split from Citroen in 2014. So, how does the first standalone model – the DS 5 – weigh up in the Middle East?

The ‘new’ DS 5 is an enigma, albeit an absolutely fabulous one. As the first standalone DS since the sub-brand’s split from Citroen in 2014, it boasts no Citroen chevron badges at all, despite the fact it’s essentially a facelifted version of an earlier model. The two companies still share the same underpinnings – a PF2 platform from a Citroen Picasso in this instance – but much like Infiniti and Lexus split from the Nissan and Toyota mother ships respectively, DS’ new approach is a more bespoke, premium one. Hence this phenomenal design. 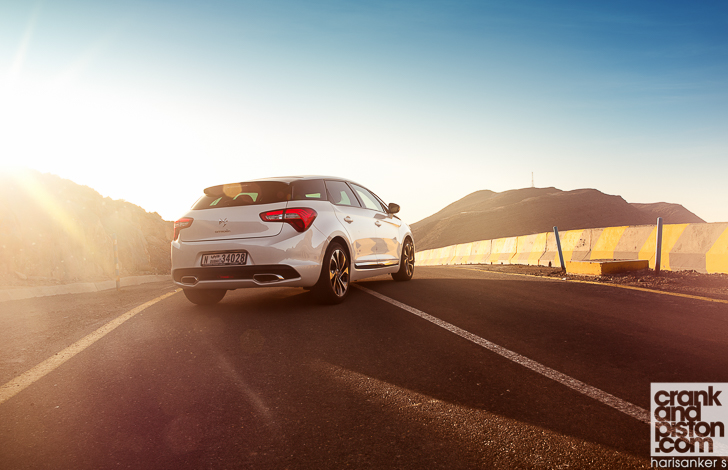 Go on then, walk us through the design…

Splice an estate car with a hatchback and you might end up with something like the DS 5. It doesn’t sound particularly enlightening, but trust us, Citr…sorry, DS somehow makes it work. Offsetting that bulbous front grille and barely-grooved bonnet are two chrome ‘sabres’ stretching from the LED headlights to the split A-pillars, much as those magnificently ornate 18in ‘Canaveral’ alloys take the edge of those bling-tastic chrome running boards. Couple that with the two-tone B and C pillars and the overall look should be at best ridiculous, and at worst, ghastly. And yet the DS 5 looks sensational, an example of French design quirkiness that made the original DS a hit back in the late 1950s.

Inside is where DS goes Gallic balls mental, however. The two-tone black and white continues unapologetically on our ‘Sport Chic’ trimmed test model (and yes, that really is the name). The seats may look like an upmarket watch strap but are surprisingly comfortable, if perhaps lacking adequate lumbar support. Everything from the switchgear on the centre console to the aluminium-esque cabin detailing is a pleasure to look at and use, even if they prove ergonomically baffling: you’ll need to rely on your passenger to switch on the hazard warning lights; buttons for the radio take up 75 percent of the instrument panel (even stranger given that the 7in screen is a bit pokey by today’s standards); and the paltry glovebox won’t even swallow the instructor’s manual.

The best though is the ‘aviation-inspired’ roof console. Nauseating principle perhaps, but a genuinely charming addition to this stylish cabin. Here you’ll find a bank of switches for the rear visor and head-up display – because of course you do – as well as a very funky set of dual glass moon roofs for driver and passenger. Again, quirky and baffling since the whole setup limits headroom quite considerably (especially with the plunging roofline in the back). But again, French. And fabulously quirky. 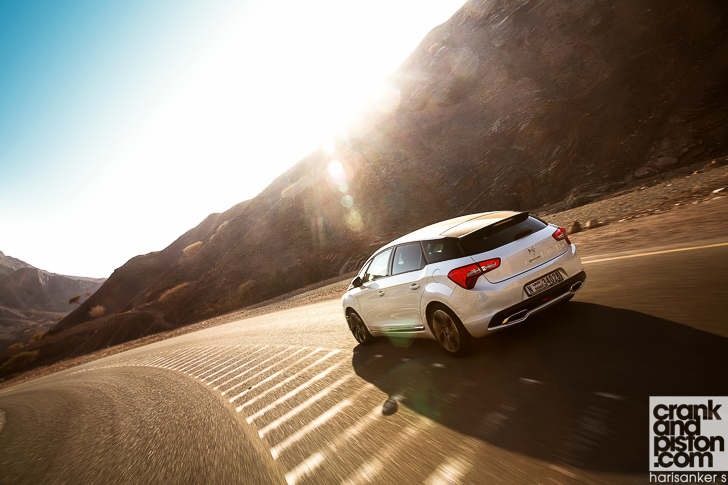 So, looks, nailed. On the move though, things do start to unravel…

Under the bonnet lies a 1.6-litre THP four-cylinder, good for 164bhp and 177lb ft of torque, but not exactly what you’d call sprightly. Limited torque low down and a general lack of enthusiasm from those brake horses mean speed pick-up is linear, yes, but lethargic. The doddery of the six-speed automatic doesn’t exactly help either, with neither upshifts nor downshifts proving particularly swift.

Then there’s the handling. Granted, we’d not expected a modern day equivalent to the original DS – or the closest we’ve seen for 40 years anyway – to be the last word in performance driving. Even so, the steering lacks consistent weighting, is power-assisted to the point of twitchy, and offers less accurate feedback from the front wheels as a result. Surprisingly the tyres themselves do offer a surprising amount of grip, though fidgety balance and unsettled body control through the higher speed corners, plus the momentum shift of ‘between 1612kg and1856kg’ in the tighter turns, means you may not want to hustle the DS 5 too often.

Step back five or six tenths though and you’re back into French saloon territory, where once again the DS 5 starts coming into its own. Visibility is pretty good, a thin rear view mirror aside, thanks largely to that bold split A-pillar design and aggressively raked windscreen. There’s plenty of legroom, huge amounts of boot space, and next to no road or wind noise rattling the cabin. You’d be surprised, given the bold design chops and questionable logic thereof, just how relaxed and civilised each journey in the DS 5 can be.

One thing we would take mild issue with is the ride quality. Woolly handling and balance we’re willing to forgive, given that it’s unlikely the DS 5 will wander into the same customer crosshairs as the more dynamic, and similarly priced, BMW 3 Series and Mercedes C-Class. We do wonder though why low profile tyres and slightly stiffened suspension don’t soak up the road surface in the way a ‘so chic’ French saloon from the Citroen family really should…. 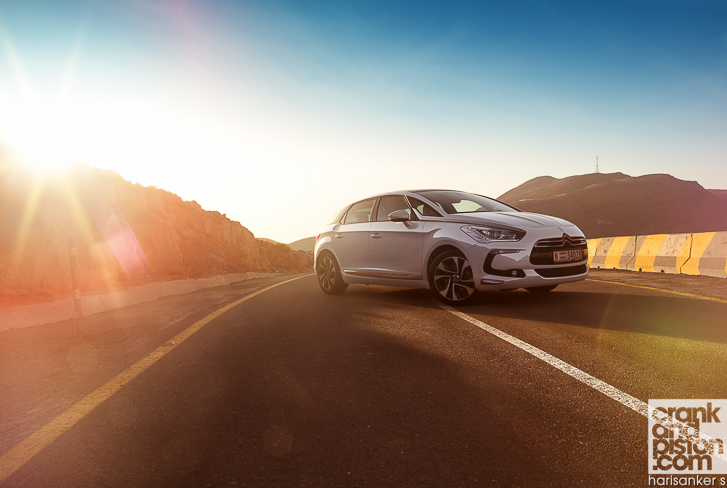 On the whole though, it’s a noble first model from DS. If road tests were judged on looks alone, this would be a half day at crankandpiston.com, the DS 5 nailing the premium French style ably with a truly memorable concept. A disinterested powertrain, vague handling and a ride quality stiffer than it should be running beneath all this is disappointing, given the wide array of more accomplished, similarly priced premium rivals available. Accept its limitations though, and as a genuinely characterful, quirky entity amidst a plethora of ‘grey’ family cars, the DS 5 may yet surprise you.

You can check out more Car Reviews HERE, and more Citroen/DS stories HERE