Is the latest Mercedes-AMG C 63 Coupe ‘the sportiest C-Class ever built’? crankandpiston.com found out on the international launch in Spain

The first AMG C-Coupe, introduced back in 2011, left me seriously impressed. Indeed, with its strong design and great handling, it was easily one of the best performance coupes I’d driven at the time. So when Mercedes made the bold claim that its new 2016 Coupe was ‘the sportiest C-Class ever built’, clearly this new model HAD to be good, particularly given the changes both on and beneath the bodywork.

Most significant is that, unlike its predecessors, the new C-Class is not a revised saloon: far from just a haircut and ‘simply’ removing two doors, the coupe has received a full makeover. It’s 15mm lower than the C 63 saloon, is 95mm longer and 40mm wider than its predecessor, which naturally gives it more cabin space. It also boasts a 80mm longer wheelbase, the additional length of which lies between the firewall and front axle, creating more room in the engine bay and thus allowing the twin-turbo V8 to sit closer to the middle of the car for better weight distribution. The kerb weight has also dropped to 1725kg, thanks to lightweight materials across both the chassis and body. The fourth member of Merc’s C-Class range then is so much more than a facelift. 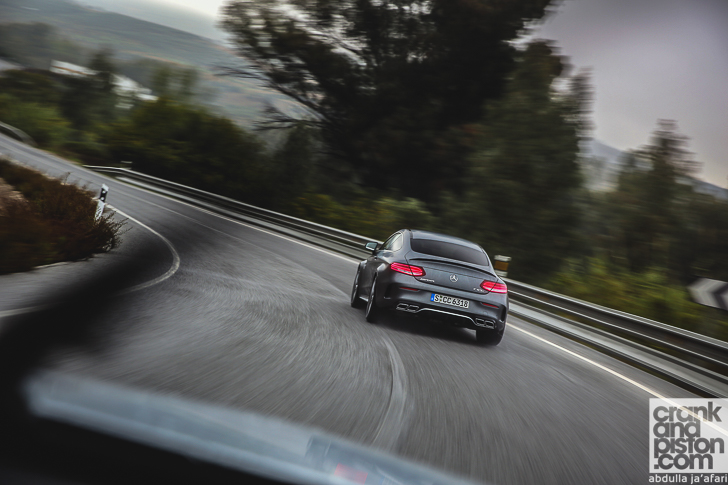 How does it look?

In terms of body parts, we have the usual ‘AMG’ styling cues like more muscular front and rear bumpers, front grille, rear diffuser, fenders, and spoiler. Our test model today also boasts the performance package, which includes a lot more carbon fibre on the front bumper and rear diffuser instead of black plastic. A wider rear track though means the C 63 Coupe also boasts more bespoke panels than ever before.

Performance-wise though, the gap between the saloon and coupe disappears. The 4-litre Twin-Turbo V8 is inherited from the AMG GT – without the dry sump lubrication – and produces 476bhp at 5500-6250rpm and 479lb ft of torque at 1750-4500rpm in the base C 63 Coupe, while the C 63 S version ups that to 503bhp and 516lb ft of torque, identical to the saloon. A wide range of power and torque though helps keep both models in the ‘tyre burner zone’ that everybody likes, one I was hoping to test for myself when we landed for the international launch in Spain. Unfortunately Mother Nature wasn’t on our side, the Ascari Racing Circuit offering nothing but rain throughout our test.

Fortunately the flap-activated exhaust note helps take my mind off that. A revised system, it has more treble and mid-tones than the sound of the AMG-GT, and as a result produces a truly awesome soundtrack, deep and resonating. Indeed, the exhaust note is even louder with the flaps open, a sound befitting AMG’s ‘evil’ character so well. Interior head turners meanwhile include the thick Alcantara steering wheel, a new dynamic performance stats screen (similar to BMW’s system) and some comfy and body-surrounding sport seats, which are mounted 2cm lower than in the saloon. Focus however is on the drive: could this really be ‘the sportiest C-Class ever built’? 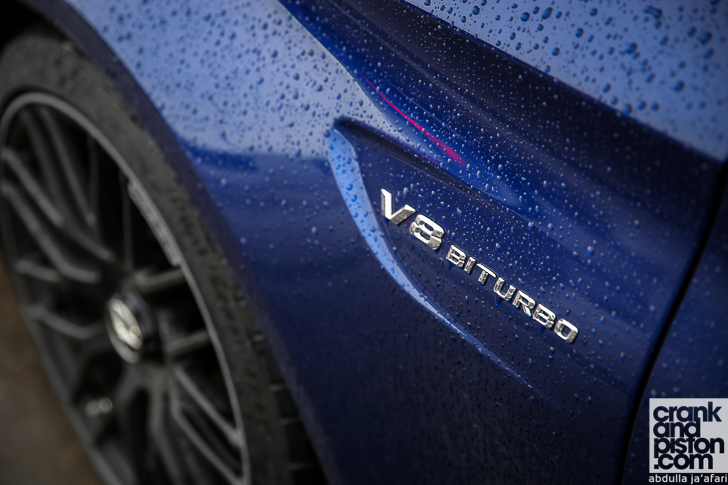 Enough with the cosmetics. Bring on the track!

Driving on a wet track, it’s hard to put the C 63’s full power and mechanical grip to the test, though the traction control system receives a stiff workout. Still, ‘treacherous’ conditions or otherwise, the coupe puts on a good show. Okay, the steering – while weighty and direct – could perhaps do with a little more feel. It can be a little imprecise under load. Saying that, the balance is startling. Clearly that extra wide rear end offers more than just banner looks with a hearty dose of traction out of the corners, though those grippy Michelin tyres play their part too as we found out later on the road.

Let’s not forget though that this is an AMG, and while the balance is beautifully judged and pointing the nose is a doddle, those rear wheels can still bite if you poke them. On-track, the braking is similarly impressive. Our test model boasts the optional extra carbon ceramic drilled discs for maximum stopping power, and even after several heavy laps, there’s little sign of fade.

Throughout the drive on track and the limited road drive, throttle response is what impresses me the most. Tons of torque from the biturbo V8 and no noticeable lag under heavy acceleration creating a much wider power range that even some high-end sports cars are unable to equal. It’s a marriage that works superbly with the seven-speed AMG Speedshift transmission, shorter gear ratios once again encouraging almost instant acceleration. It did make me wonder how well you could hold a drift in the high revs. The shifts themselves may not be as smooth or instant as I’d hoped, but there’s little doubting the effectiveness. 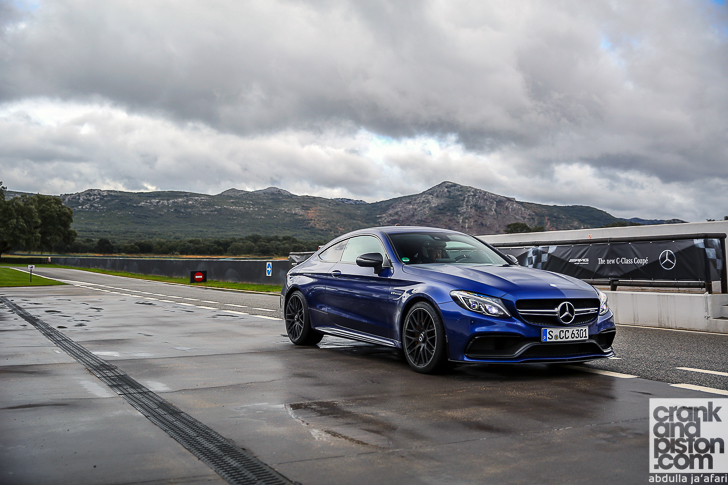 So then, what’s the verdict?

Is this really ‘the sportiest C-Class ever built’? The new C 63 AMG Coupe does make a strong case. There’s bags of grip, wonderful styling, great cabin design and that typical AMG character bubbling away through the acceleration and engine notes means it’s difficult not to fall for the coupe. Iron out slightly hesitant gear changes and some vagueries in the steering, and we really would be onto something truly special.