Could famed engine builder and engineering firm COSWORTH be about to enter the fray and give the FA-20 engine found in the Toyota GT86 and Subaru BRZ an injection of much needed shove? 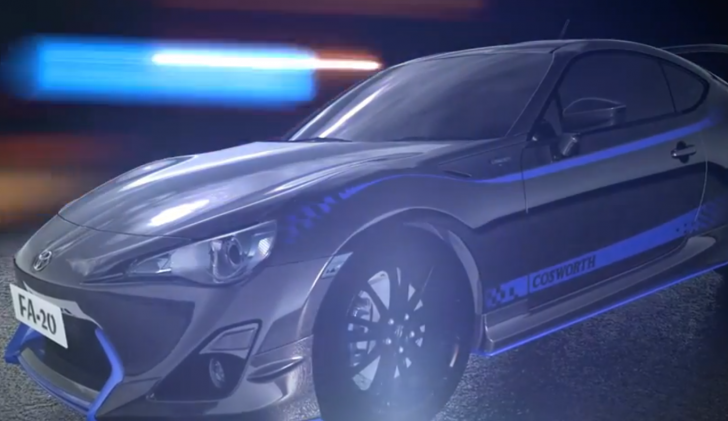 The Toyota 86/Subaru BRZ is a breath of fresh air in the car industry. It’s not a mass audience car by any stretch, but if you are a proper car guy you should look at it closely. Why, you ask? The Toyota 86 offers prospective owner something special. Something intangible. The fun factor. It is a pared-down car, lightweight, missing all the usual luxuries and extras. It’s designed to be a giggle and bring back the ‘sport’ into the sports car. It isn’t overly grippy or over powered and won’t throw you into the countryside if and when you get it wrong.

That power element though. It’s a tough one to ignore in the mass market. The car is officially underpowered and pretty much dog slow. Get it up and singing and it motors along, but that doesn’t excuse every other element of the power range, where it struggles.

Which sucks. Both brands have pretty much admitted publicly that forced induction versions aren’t currently in the cycle plan, leaving the tuning industry to step in. Now, there are plenty of engineering firms out there that have thrown their towels into the ring and started offering current buyers with options, from ECU maps, turbochargers along with superchargers. They clearly blow hot and cold dependant on who is building them, however the news just out is that one of the most successful engine building/tuning firms is about to start playing with the FA-20 motor.

COSWORTH have just leaked this little CGI effort, giving a lot of credence to the idea. Could the company that sits second only to Ferrari in F1 race successes be about to offer a dealer fit option? It certainly makes sense. They have the ability and skill to produce something showroom ready and comply to the Toyota/Subaru warranty schedule.

Not only that, COSWORTH is a name that could have the strength to push people towards the car that otherwise would turn their nose up at the beautifully handling and deft slug.

Stand by for more news as it appears.