First points go to the steering as the Corvette snakes its way into the dunes. Many have marvelled at the connection between driver and front wheels in the C7 compared with its predecessors, and the convertible is no different. Now back in Sport mode, the steering is much weightier than in Tour or Eco and offers much greater precision through the opening stretch of long sweeping corners, allowing me to lean on the front end without overwhelming it. The view from the driver’s seat is a curious one, mind: like the hardtop model, the undulations of the bonnet and the small windscreen means forward visibility isn’t great. I’m concentrating so much on this in fact that the first dip in the road catches me off-guard. My my, this is getting interesting…

Firing through the seven-speed gearbox via the wheel-mounted (plastic) paddles, the Corvette is up to pace quickly, the low down grunt from the V8 meaning there’s barely any lag through the ever-widening corners. Even the rear wheels stay put, my fears that this rear-wheel drive 455bhp sports car would sail arse-wards into the nearest and deepest sand dune on this unpredictable stretch of tarmac fortunately not coming to pass. Already that beautifully configured C7 chassis ensures there’s oodles of balance through even the longest and fastest of turns, but it’s as the Tal Mireb run begins to wind closer and tighter to the dunes that the convertible really begins to show its class. We’re not quite at Porsche 911 standards of precision (the Corvette still feels a little too big for such a comparison, and does bottom out on some of the steeper drops in the road) but the stiffened suspension allows me to attack the road ahead without fear of understeer undoing all the engine’s hardwork.

Through the Head-Up display I’m reminded of the G-Force reader, the opening salvo of 0.3 and 0.4g rising the more confident/yobbish I get as the corners roll past: downshifting into second for some of the tighter turns, holding the gear and feeding the power back in again, and I manage to grab a 0.8g. Those hours of highway driving really were worth it. 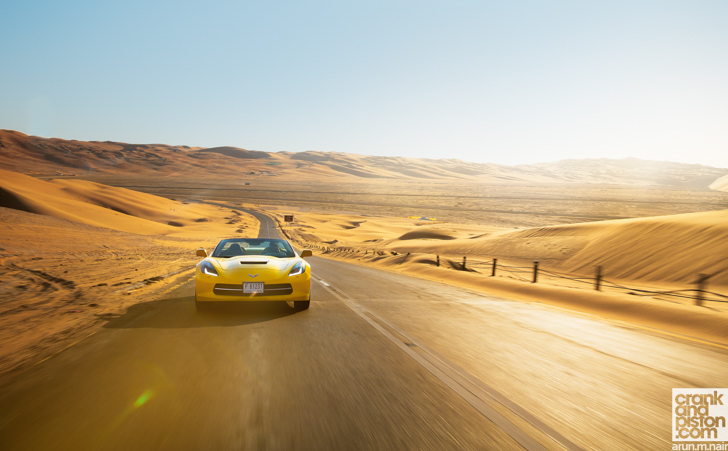 Those heavy duty brakes allow me to keep the rear settled even when the anchors are thrown out hard: there is the occasional wobble when a blind left hander proves slightly sharper than it looks from my vantage point, but a couple of downshifts help keep the momentum pegged. Indeed, swift changes through the seven-speed automatic box help punch the Corvette back out of the turns without upsetting the balance, a tangible rock in the cabin as the next cog is slotted matching the angry nature of that V8. For this run the fabric roof has been stowed, and as the needle bounces off the tachometer, that awesome soundtrack fills the cabin again.

More skilled hands than mine might tell you that the convertible Corvette does not handle the corners as solidly as its hardtop counterpart, and while that may be so, on this road it’s difficult to swing the gavel and definitively state that. The energy of that 455bhp V8 is still mightily dramatic, balance through the corners more than a ‘Corvette’ should reasonably be capable of, and while the precision may not be quite up there with the Porsche 911, as a convertible the Stingray takes the aggression of its hard-top alter-ego and throws in a visceral soundtrack that should tempt you to ditch the top altogether. It’s already encouraged me to spin the Corvette around and line up for another thrash through the Tal Mireb dunes. 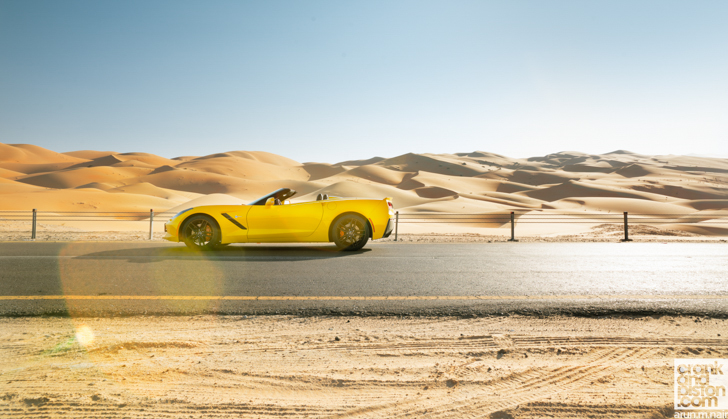 What we’re unaware of at this moment is that our blast through the dunes – coupled with amorous soundtrack – has grabbed the attention of the nearby military base: light traffic on this road is nothing new, but Really Very Yellow sports cars with a volcanic V8 roar is less common. It’s with some considerable shock then that – as the Corvette ascends a dune – a Blackhawk appears on the horizon, heading straight towards me. The C&P crew in the camera car are similarly perplexed, and try in vain to grab some shots of our new extra.

The Blackhawk’s second run however is considerably closer, the rotors dipping as the helicopter manoeuvres its way around the dunes at what can only be a 50ft altitude. This, coupled with the frenetic arm gestures of the pilot, we translate to mean “what the hell do you think you’re doing?” We weigh the possibility of our Corvette outgunning a Blackhawk, and conclude that such a scenario would leave us royally stuffed. Instead, V8 thrashing swiftly turns into a V4 third gear cruise through the dunes, our unexpected audience eventually disappearing entirely. Leaving us to ponder the long drive back home.