BMW vs Hyundai vs Lexus. The grey area

At Hatta dam we pull over to catch a few breathes, neck what remains of our cold coffees and swap places, Arun and I now climbing into the Lexus whilst Phill and Daniel take up position in the Hyundai and BMW respectively. What strikes me first about the Lexus is not the solid build-quality, possibly too cluttered centre console and the comparative lack of head and legroom. It’s my seating position. Cocooned as I was just minutes earlier by the transmission tunnel in the Genesis, my seat in the Lexus feels much too high, eroding some of confidence/comfort before I’ve even turned a wheel in anger.

So too does the pick-up from the Lexus V6. A difference of 9bhp is scant in the grand scheme, but even with my foot buried in the footwell in Comfort mode, the Hyundai ahead quickly pulls away, Daniel getting much closer to my rear bumper than either of us had expected as he too puts his foot down. Once past the mid-revs the 3.5-litre unit undergoes a resurgence, the pull now much feistier. I’m wary though of dropping below 3/4000rpm, and leave my gear changes late as a result. Switching from Comfort to Sport does stiffen the ride a little, but at least gives some renewed vigour back to the Lexus, albeit at the expense of the fuel economy: whereas the Hyundai used just a quarter of a tank across from Dubai, the Lexus tank is almost half empty.

What brings the GS 350 back into contention though is its balance through the turns, thanks to a low centre of gravity and a stiff chassis. The Genesis up front is crippled through the tighter turns by its ESP, whilst I have the GS 350 firmly by the collar, and quickly overtake. Even at ambitious speeds, the Lexus’ tyres hold on well, the rears on the verge of lift as momentum switches sides through unsighted hairpins and chicanes. 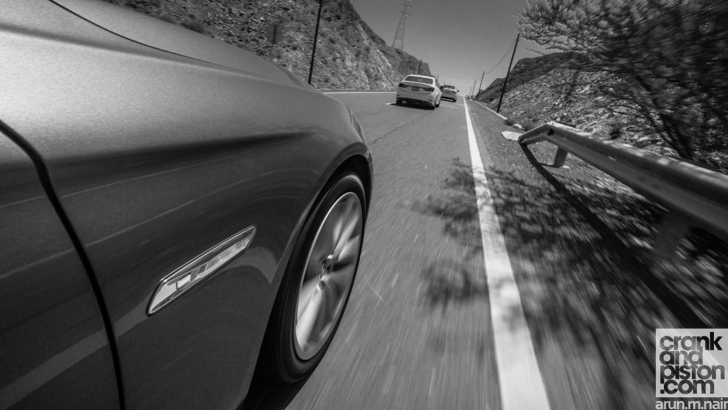 Even with solid rather than swift changes through the eight-speed box, the GS 350 is proving a much feistier animal. Although offering the same power as a standard GS, our F-Sport test model offers tuned Adaptive Variable Suspension and bigger brakes for renewed performance (and, y’know, bigger wheels and perforated leather trim). I’ve soon left the Hyundai behind, but it’s a shame I’m not really enjoying the thrash as much as I’d like to. With limited lumbar support, through the seats, Arun and I are both rolling side to side as the car changes direction, and it’s difficult to push harder without feeling one or both of us are about to be pushed out the window.

Across the mountains and at the bottom of the hill, we spy another beauty spot for our monochrome photoshoot and a quick catch-up. Unlike the Lexus, Daniel feels much happier with the BMW’s performance, whilst Phill – though complimentary of the Hyundai’s build quality and low price – is disappointed with the Hyundai’s thrash-ability compared with the BMW. I meanwhile admit that I am missing the Hyundai’s superior creature comforts, even if the Lexus’ performance does take the edge. I’ve yet to step aboard the podium topper though, the 535i. It’s time to swap seats again….

Inside the BMW is as you would expect: beautifully stitched upholstery, terrific build quality, and a very button-fest you-never-know-you-might-need-it German centre console. That’s of little significance though when I sink into the electric seat, lower it as far as I can go, and assume ten-and-two on the steering wheel. Everything immediately feels right, the fine balance between elegance and sportiness almost tangible. With a blip of the throttle, a mini-growl bounces through the cabin, the tiniest of shakes of the chassis telling me that 302bhp and 295lb ft are ready for the off. 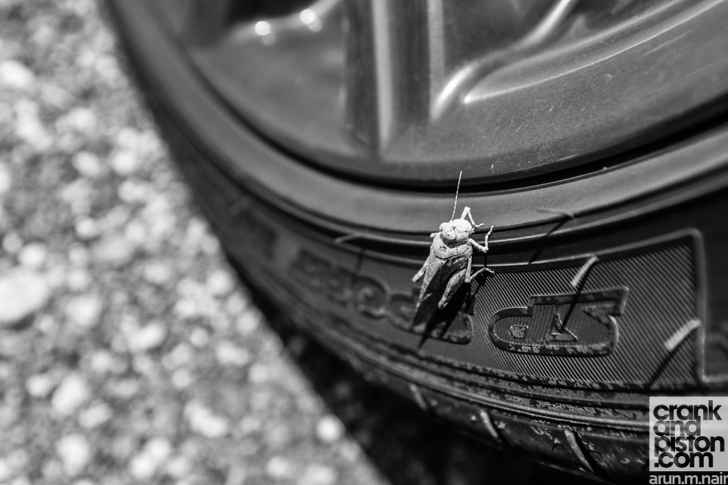 Speed pick-up is magnificently gutsy, an almost aggressive pull away from the line soon calming to linear acceleration, the needle on the speedometer rising quicker than the landscape speeding by on the outside might suggest. It feels quick, but the smooth ride coupled with good acoustics in the cabin leave you almost shocked at how quickly – and comfortably – the 5 Series can cover ground. Through the corners though is where the BMW teaches its impudent pretenders a lesson, good weighty steering encouraging me to put in the effort under load and connection to the front wheels allowing me to nail each turn-in. Mighty brakes help me scrub this speed off quickly – as do swift downshifts through the eight-speed box – allowing me to keep the saloon balanced through the turns. The rears, as is typical of a BMW (even a premium one), are twitching as I put the power down out of the corner: not enough to spin up or snap the rear end around but just enough to keep me on my toes. Again and again, into and out of the corners, the front wheels stay clamped to the apexes whilst the rears dare me to push a little harder. I’m smiling: the Lexus and the Hyundai may have been enjoyable runs, but the BMW is, well, fun.

At the bottom of the hill there’s little discussion. With a great chassis, superb looks and marvellous quality interior, the BMW 535i is our victor. All three of us agree though that the Lexus and the Hyundai have pushed the Beemer closer than anticipated. The poise and enjoyment isn’t quite there in the Lexus, but whilst the BMW dives quickly yet smoothly through the turns, the GS 350 F-Sport asks to be taken by the collar and thrown, the drive consequently more aggressive than either of its rivals today. With more supportive seats, and as the best looking member of the fold, one wonders what potential the Lexus is harbouring, give or take a tweak. 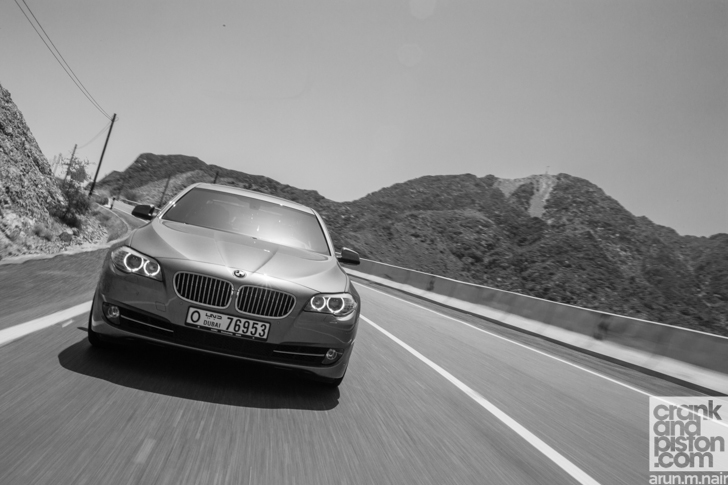 The big surprise though is the Genesis. Granted the balance and grunt as neither the Lexus nor BMW, but the quality of the build, the exterior design and a sizeable price difference mean the Genesis is not some precocious newcomer just along for the ride: a gutsy engine, a good gearbox and a superbly civilised cabin emphasise as much. As we were left a little shell-shocked in last year’s group test – when a Centennial almost outperformed an Audi A8 – so we are today. If Hyundai maintains it’s current pace of development, the upcoming generations could warrant some serious consideration in the showroom.

Today the BMW 5 Series established itself as the pick of the bunch. But given the rivals legitimately snapping at its heels, turns out choosing a mid-sized premium saloon is not be the black and white decision it once was.