BMW vs Hyundai vs Lexus. The grey area

crankandpiston pits the brand new Hyundai Genesis and a Lexus GS 350 F-Sport up against the BMW 535i to see if Germany still holds a monopoly on premium mid-size saloons.

Time was that if you were looking for a mid-sized saloon offering grunt, dependability and premium build, you would buy German: rarely did US or Asian products offer much of a challenge. But times have changed, and though Germany – arguably – still remains pick of the crop, global competitors – with refined models, gutsier engines and an ever-increasing reputation – have been closing the gap. Today, choosing a premium mid-size saloon is not the black and white issue it once was.

Take Lexus. While reliability and build quality of a ‘luxury Toyota’ was beyond question in the late 1980s, established (American) marques like Cadillac – plus the idea of a mainstream Toyota going high-end – meant pick-up in the USA was slow to begin with. Yet an ever-bolstering line-up, plus rave reviews for the company’s customer service, meant initial sales targets were met and overseas markets began to grow. Today, the Big Three – BMW, Audi and Mercedes – have Lexus unceasingly nipping at their heels. In the late 1980s/1990s meanwhile, Hyundai and Kia were bywords for poor reliability, dodgy styling and woeful engine performance: only prices that substantially undercut European ‘rivals’ kept Korean manufacturers in the game. Today though, owing to improved performance, renewed quality thanks to overseas investment, and few styling cues from former Audi-turned Hyundai designer Peter Schreyer, buying a (cheap) Hyundai is now a genuinely attractive proposition.

So, is buying German still the best option for premium sporty saloons? Or has Korea thrown a curve ball? Time for a group test. 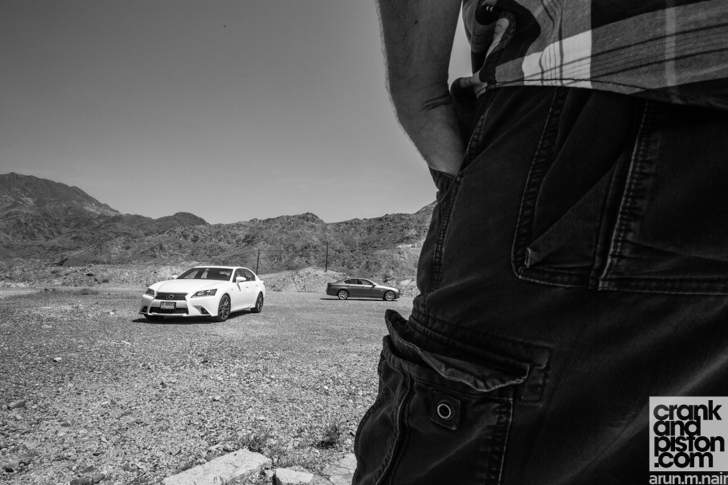 It’s an abysmally hot day, but our convoy of premium models is already on its way to one of the region’s best mountain roads in Hatta. Taking up the rear – complete with mirrored sunglasses and coloured sneakers – is crankandpiston’s own Phill Tromans in a 2014 BMW 535i. Now in its sixth generation, 42 years of upgrades have arguably ironed out all creases the 5 Series ‘boasted’ in terms of performance and build quality, and now – with a 3.0-litre TwinPower Turbo straight-six stuffed under the bonnet kicking out 302bhp, 295lb ft of torque and a 5.7 second 0-100kph time, our Space Grey metallic Beemer has some serious arsenal packed.

Piggy in the middle is Daniel – crankandpiston devotee and member of the Frorath clan – in a Lexus GS 350 F-Sport. Nearly two decades younger than the 5 Series, the GS Series is still in its fourth generation, a formidable reputation having been built courtesy of some significant styling changes over the years and the Toyota company’s formidable reliability. Under the bonnet lies a 3.5-litre V6 that kicks out an identical 302bhp to the BMW but 18lb ft less (277lb ft). Even weighing in at 1765kg to the BMW’s 1675kg, our Ultra White Lexus (and yes, that is the actual name) still manages to equal the 535i’s 5.7 second 0-100kph time. There’s that Japanese engineering magic at work…

The final RWD model in our monochrome line-up – chauffeuring both myself and crankandpiston photographer Arun – is also the newest addition, the 2014 Hyundai Genesis. This second generation model is so new in fact that it’s yet to break triple figures on the trip computer. As well as being the infant of our group (the Genesis line didn’t appear until 2009), the hefty 3.8-litre V6 under the bonnet also produces the most power, bringing in 311bhp and 293lb ft of torque. In crankandpiston.com top trumps then, the Hyundai has taken an early lead, though loses some credibility with a 0-100kph time almost a full second slower than its rivals. The Genesis though has another trick up its sleeve. 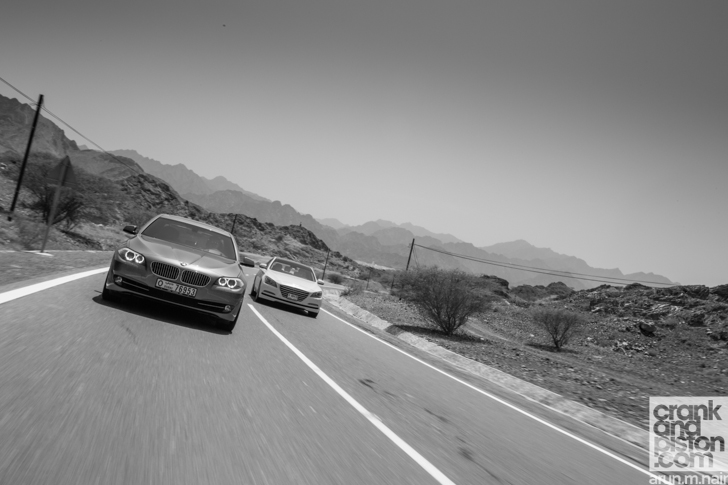 Unlike its forebears, our Hyundai boasts some magnificent curves and has clearly received some European influence: squint at that minimalist bootlid and you might think you were looking at a Mercedes-Benz. The real blue ribbon-winner though is at the front, where stylishly cut air intakes in the front bumper and Audi-esque sweeping headlights create a striking presence. Admittedly the front grille and rise of the bonnet lines could be considered ‘bulbous’, but the 18-inch alloys and strong bodylines down the flanks bring the Genesis back from the brink. Like it or loathe it, Hyundai’s newboy has some character.

Further up the highway the traffic dies down, and our convoy begins pirouetting about itself – much to the amusement of several pick-ups following behind – as I strain to get a closer look at the Lexus and BMW. The aggressive, boxy looks of latter day 5 Series are long gone, and while others mourn this loss, the contemporary look – in my opinion – is a strong one. There’s still menace about those headlights and the rippled bonnet, but it’s a menace coupled with elegance thanks to the beautifully sweeping bodylines and striking 17-inch light alloys. For an M5 you expect some outlandishness, but for a mid-sized cruiser with a little oomph under the bonnet, the 535i finds a good balance.

It’s a strong look, one that bows though to the Lexus, as does the Hyundai. All points and sharp angles at the front, the Lexus is easily the sportiest looking model of the group, an adjective further enhanced by the ‘F-Sport’ badges across the wheel arches and bootlid. Like the BMW it mixes dynamism with elegance gorgeously, but gets the nod thanks to that cheeky tail lip spoiler (the only of the group with one) and that low, low stance. 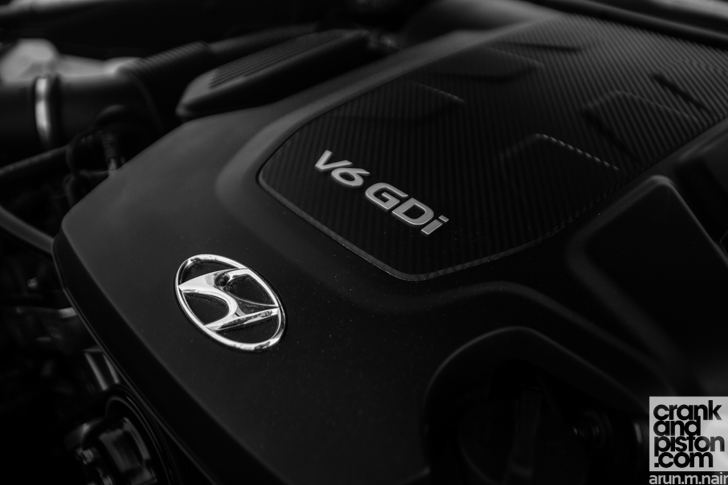 Having crossed our convoy (briefly) through Oman and back into the UAE, we’re soon barrelling down the long sweeping back-road that take us into Hatta. There’s still a good 10km of our journey to go before we get into the seriously twisty stuff, but with a playground ahead of us, I’m soon downshifting in the Genesis, planting my right foot, and gunning it.

As the most powerful of the three, good pick-up from the Hyundai’s V6 isn’t surprising, the revs rising without surcease despite a rather hefty 1880kg kerb weight: the fine leather and Centennial-esque ‘premium’ nature of the cabin does add up. A whine as the engine hits the higher revs does make me wonder how much the top end has to offer (remember that 6.5-second 0-100kph time). What does come as a bit of a surprise though is the weighty steering. True, there is still some lightness at mid-point but there’s more than enough heft to keep the big saloon hustling. Smooth changes through the eight-speed gearbox – like the BMW and Lexus – help maintain momentum as the road begins to sweep yet more, solid progressive braking making sure I don’t accidentally chuck the Genesis into the undergrowth. All the while, great lumbar support through the seats and a silky smooth ride (the change in driving mode from Comfort to Sport doesn’t tangibly affected the ride, despite stiffening up the suspension) gives me great confidence through the corners, and though the Genesis is no lightweight track weapon, the temptation to give it partial beans is high.

A few issues arise however, the most significant of which is the driver assistance nannying. On the fast switchbacks, where early downshifts and good brakes help keep the balance in-check, the Genesis handles its turn of speed surprisingly well. As our convoy heads deeper into the twistier stretches though, the traction control begins to kick in more and more, refusing to let the rear wheels break away and power to be fed too aggressively through the rear wheels. I would turn the system off entirely if I had any idea how to do so (it would take a full hour and a lot of Phill’s patience to finally find the ESP system, three sub-menus down). The other issue I’m facing is the bodyroll. That 1880kg kerb weight – hardly felt, even under heavy braking – is suddenly upon us as we flick-flack through upcoming left and rights, the resultant loss of balance unable to help me make the most of the acceleration. For a spirited thrash through the mountains, the Genesis handles itself surprisingly well, but asking the longest and heaviest premium saloon in our line-up to go ten-tenths is asking too much.