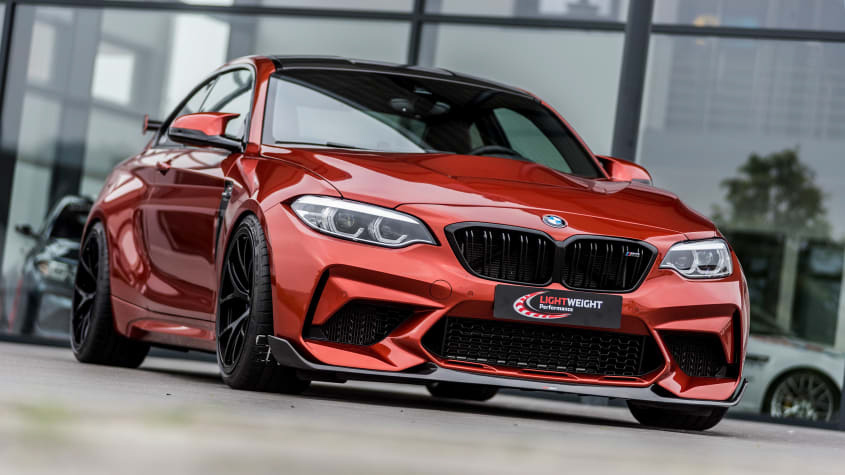 The new BMW M2 CS made its debut late last year, and with its closest rival being the two-time eCoty-winning Porsche Cayman GT4, it’s a car we’re rather looking forward to. German tuner Lightweight Performance, however, has devised an alternative, dropping weight and increasing power of the standard M2 Competition.

Adopting the same approach as the $93,000 CS, the tuner has replaced various components with lightweight items, fettling the suspension for better dynamic performance and including a power upgrade for more straight-line go.

Featuring Munich’s M-developed S55 3-litre turbocharged straight-six, the latest M2 has more tuning potential than most cars in its class. Factory figures come in at 404bhp and 406lb ft of torque, already up 39bhp and 37lb ft on the N55-equipped car it succeeded. Lightweight Performance, however, has cranked it to 487bhp and 482lb ft of torque – enough to worry even the flagship M4 GTS and exceeding numbers from the M2 CS by quite some margin.

Zero to 100kph is brought down by a tenth over factory to a quoted 4.3sec, with 0-200kph coming a whole two seconds sooner at 12.9sec. Most impressive is its top speed, now coming just a couple of digits away from the M4 GTS at 300kph – the standard car tops out at 250kph, or 280 with the Driver’s package.

As the tuner’s name suggests, weight reduction is always a consideration in its projects. Out goes the steel roof for a carbonfibre item, reducing weight by 6.5kg whilst lowering the centre of gravity for better handling. A new, lightweight exhaust system not only increases sound, but also lowers weight by another 7kg, while a set of 19-inch forged wheels also contribute to a 30kg overall reduction in weight. A carbon ‘GTS’ bonnet, front splitter, diffuser and rear wing also add to its more aggressive aesthetic, whilst raising downforce numbers at speed.

Aside from the reduced unsprung mass from the lightweight wheels, Bilstein Clubsport coilovers are fitted for improved dynamic abilities, with 265 Michelin Pilot Sport 4 S rubber applied to all four corners for optimum traction. Proving its performance, the tuner recorded a 1:31.16 lap time around the Sachsenring in Germany, substantially quicker than the 1:34.97 of the new M2 CS.

Despite the heightened focus, Lightweight Performance ensured the M2 maintained its rear seats and features such as air conditioning, making it a useable car when you’re away from the track.

Pricing for the kit begins at $21,770 before any bespoke options, but given that you can now find an M2 Competition for sub-$50k on the used market, the total would still fall neatly under the price tag of an M2 CS…