BMW i8. DRIVEN. A snapshot of tomorrow

Today I have seen the future, and it is in the shape of the new i8.

Headlining the BMW i sub-brand when the initiative debuted in 2011, more than five years of development had already gone into the company’s first plug-in hybrid vehicle when it made its production-ready debut at the 2013 Frankfurt Motor Show. In doing so, the i8 – formerly the ‘BMW Vision EfficientDynamics’ concept – became the ‘world’s first sports car to be purpose-built with sustainability in mind’. From the ground-up for instance, the i8 has been built – including the carbon fibre base – using what the company calls 100 per cent renewable electricity, a discipline the hybrid sports car also uses predominantly on the road without restricting the ‘premium’ nature of a $172k sports car. The i8 then is much more than ‘just another hybrid’. To BMW, it’s potentially a new beginning.

I myself am particularly intrigued by BMW i’s most ambitious project after a factory tour in Frankfurt last year. Having seen the journey from vision to reality up close – and with crankandpiston having already driven the pre-production model in France – my invite to the international launch drive of BMW’s second ever i-model in Los Angeles is RSVPed with excitement.

It’s only natural then that our international adventure begins in the first, the pure-electric i3. Shaded from the limelight by its bigger brother, the i3 still showcases some of BMW’s most significant technical components, most notably that eDrive Hybrid synchronous motor but also the new BMW i Remote App, a new connectivity program designed to help reduce ‘range anxiety’ by identifying charging stations within reach. As it turns out though, our i3 taxi is remarkable for another reason, namely our chauffeur Carl. He’s 6’ 5” tall (having somehow squeezed his simply enormous frame into the diminutive hatchback), he’s a keen BMW fan, a chatty sort, and during the week is a member of the Los Angeles Police department. BMW has clearly spared no expense for this international launch, as is proven shortly afterwards when we pull up at the TR+2 StudioHouse as designed by Cigolle X Coleman, a structure built into the hillside and made almost exclusively with recycled materials for greater efficiency. It’s a rather apt metaphor for the i8 itself, and one can imagine the hybrid sports car sitting well in the property’s garage. 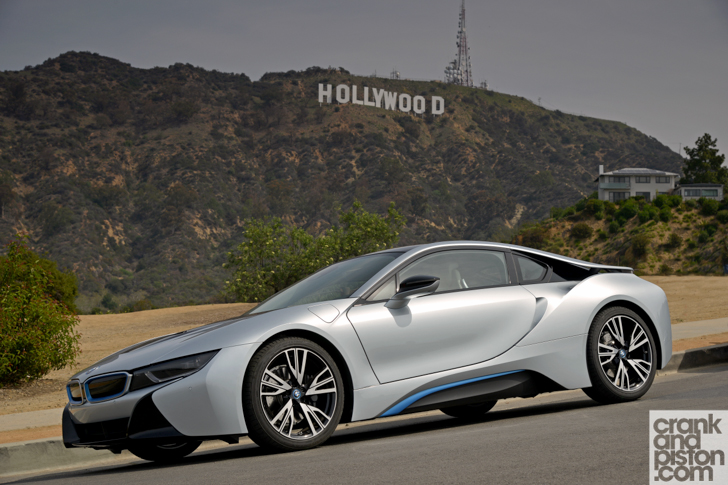 Nibbles and introductory chats with BMW i representatives – including head of project management Henrik Wenders – are served quickly around the i8 itself. This is the first opportunity I’ve had to see the sports car in all its production-ready glory since last year’s Frankfurt Motor Show (once the gentleman playing smooth jazz on the saxophone steps out of the way at least). I said it then and I’ll say it now, it’s a stunning design and a piece of art in its own right. While no doubt a large proportion of this hybrid model has been shaped with ‘efficiency’ in mind – sitting as it does just 1293mm high and 1942mm wide – the smoothed angles flow so beautifully across the carbon fibre bodywork that you wouldn’t believe this has been designed in a wind tunnel. At NASA, Area 51 or 30 years in the future, yes. But a wind tunnel, no.

I’m also gratified to see that, rather unusually, very little of the design has changed since the conceptual stages, giving the car that raw look that is both elegant and aggressive (swathes of blue helping to re-emphasise those curves). The one-piece carbon fibre ‘butterfly’ doors are a beautiful addition to the car’s modern look, as is the ornate front bumper and enormous bonnet scoop on our Ionic Silver model. But it’s BMW’s attention to detail that really strikes home the significance. At the front for instance, the join between the traditional kidney grilles and the lip of the bonnet is much closer and selectively angled, providing an added dash of exclusivity. Along the flanks – past those rather racey 20-inch alloys – the door ‘handles’ are positioned beneath the bodywork for added aerodynacism and funkiness. But it’s the rear three-quarters though that really make the i8 standout for me. Look closely and you’ll see a small gap between the sweeping roofline and the rear flank, just above the taillights. Aerodynamically it allows air to funnel more efficiently over (and through) the vehicle, but unless the i8 is planning a land speed record attempt any time soon, the benefits are unlikely to be colossal on the road. Primarily, it’s another example of BMW’s modern design, and only makes my desire to jump behind the wheel that much greater. 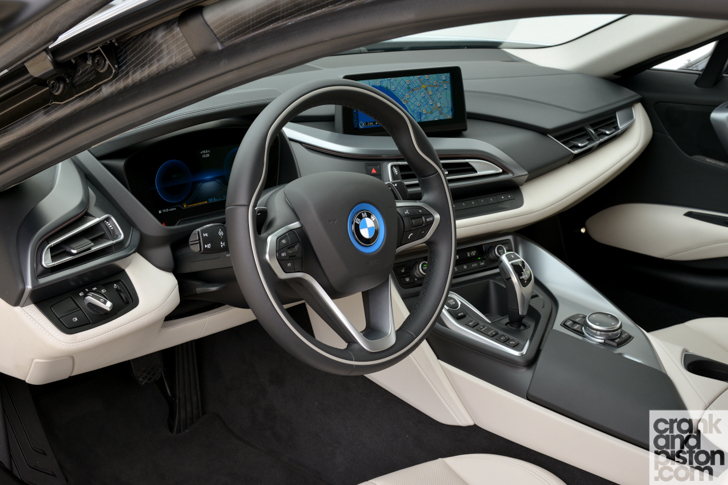 Stepping inside, the cabin is surprisingly roomy, given the shape and sweep of the roofline and low-slung look of the i8 from the outside. But while the futuristic look of the i8 has been put to such eyebrow-raising use on the outside, inside the look is rather more ‘BMW’ than ‘future’. The leather – tanned with olive leaf extracts (there’s that attention to detail) – is beautifully stitched together with nary a plastic panel to be found. The blue ‘i’ colours detail the steering wheel and stitching on the lightweight bucket seats, the base of which is made from carbon-fibre-reinforced-plastics. I’m relieved to find that my seating position is suitably low once I’ve worked my way into position: a hybrid premium model it might be, but the i8 is still a sports car. This much is emphasised by the five-way Driving Experience Control, which changes both the handling and fuel conservation of the car, but also the colour on the centre-mounted information screen. And again, it’s all beautifully put together, but in comparison with the outside, it’s perhaps a little sensible. Where’s the ‘vision’? Where’s the futuristic statement? A little more lunacy would not have gone amiss.

I’m soon reminded of the i8’s hybrid prowess though when the 1.5-litre TwinPower Turbo three-cylinder unit is ‘fired’ into life….

Silence. In full Eco mode – we shall experience during our opening stretch – the 228bhp three-cylinder that sends power to the rear wheels is inactive, the 129bhp electric motor connected to the front axle providing full power. The driver information screen fires into life with one BMW welcoming graphic or another but there’s no turbocharged whir to be heard: I’ve driven a number of hybrid cars in my time but it’s amazing how attuned the human brain has become to internal combustion firing into life. This aural ‘vision becoming reality’ may take a little while to get used to. 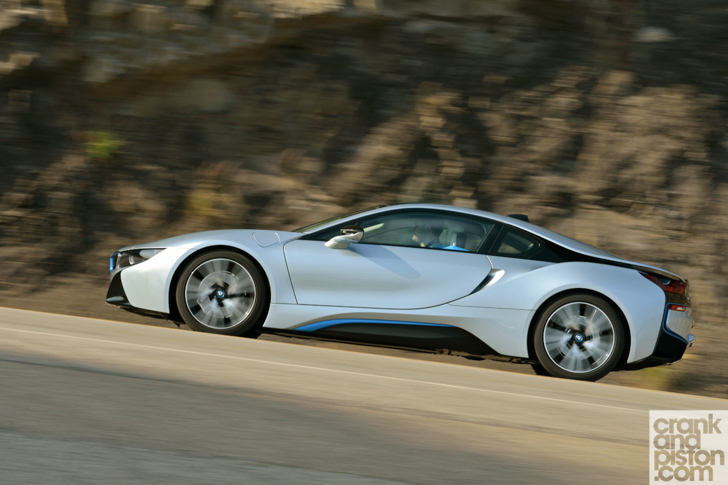 Having mounted up and with the customary iPhone snaps in the bag, our drive gets underway, the opening stretch taking us through the centre of Los Angeles. Immediately several things become clear, namely that the number of Gucci and Chanel stores in the area won’t leave prospective customers balking at the i8’s $172K asking price. And yet there are few sports cars around, Ferraris and Lamborghinis taking a backseat to Toyota Priuses and Teslas. As the leading city in the world for hybrid motoring, LA offers yet another insight into life with the i8. And indeed, the future.

This little hybrid haven could so easily be ruined by an aggressive whine from the electric motor or undue amounts of wind noise. But no. As we cruise down LA’s admittedly poorly maintained road network, the silence is rarely interrupted, the acoustics having been developed so brilliantly that only the smallest of sounds from the road surface can be heard. In keeping with this rather tranquil form of motoring, the suspension – in its softest setting – massages over the bumps of the road, solid lumbar support from the seats meaning ride comfort is about as bang on as it could be. It’s a shame that a slightly too small rear window blocks my view of passing pedestrians: everyone but everyone is staring with interest and a smile – rather than horror – at the i8. Another tick in the box for BMW. 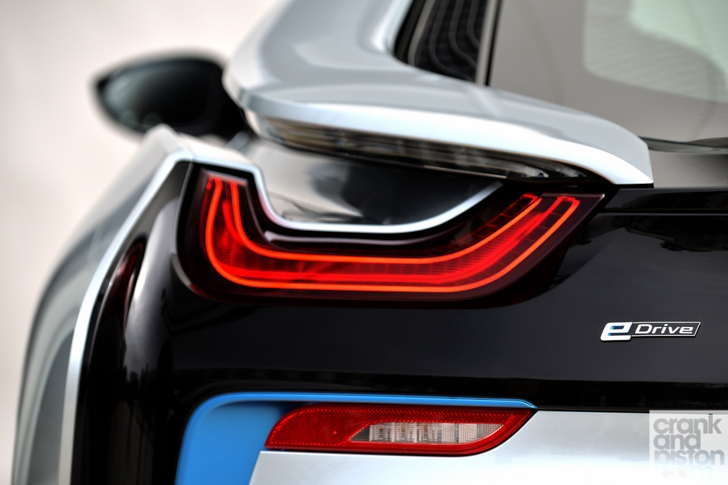 As we make our way out of the town, and having completed a sizeable distance already, a graphic on the screen in front of me shows that we’ve almost completed our 37km range of all-electric range, at which point – traditionally with electric cars – range anxiety should kick in. I counter this however by twisting the Driving Experience Control rotary dial to select Comfort. Here the economic running of the 129bhp motor remains intact until the accelerator is pushed. When the revs rise a little more ‘aggressively’, the turbocharged three-cylinders kick in to provide a little extra grunt though not at the expense of the ride comfort. The silence that had surrounded us is intercut with occasional semi-rasps from the three-cylinder, though it’s not a shrill noise and is forgotten almost immediately. As we continue, energy from both the overrun of the engine and under braking is recuperated through a generator and sent back to the lithium-ion batteries for storage: by driving with only intermittent use of the 1.5-litre unit, I’m still managing to charge the battery (though this can also be done overnight at home by plugging into the wall). With a full tank of juice – electric and petrol – the i8 could cover 600km easily in Comfort mode.

It’s all technically very impressive, re-emphasising BMW as – in my opinion – one of the automotive world’s most innovative brands in business today. But with regenerated energy and 360° ELECTRIC emission-free driving comes a concern. Key design briefs of the i8 during development specified ‘exterior looks’ and ‘driving experience’ as the two key elements of the i8 design. But amidst the game-changing technology, has the thrill of the drive been lost? A couple of hours into our journey, an answer is offered courtesy of Los Angeles’ famously winding Mulholland Drive, with the famous bend known to locals as ‘the snake’. Time to see how BMW’s first hybrid sports car handles the twisties.