Behind the scenes with the 2015 Chevrolet Tahoe

Almost 12 hours behind the scenes with a 2015 Chevrolet Tahoe on our recent McLaren 650S photoshoot gives me time to consider ‘the big SUV’ as an entity.

I’ve gone on record in the past saying I don’t really ‘get’ big SUVs. They’re difficult to get going, difficult to stop, and difficult to manoeuvre without somehow blotting out the sun. Their sheer size – measuring as they do twice the size of Jupiter and weighing about as much – makes parking one a collective adventure for both the occupants in the car and the sea of human misery being held-up behind. Across Europe and the United States, a coin toss determines whether the fuel tank will be filled or whether this month’s mortgage payments will be settled. And, of course, there’s the sadly all-too-common highway driving technique, wherein headlights are flashed without surcease by Mr Big SUV in the fast lane – usually just a couple of inches behind the car in front – to explain why his time is far more valuable than those around him. And there are words we use to describe Mr Big SUV. Many words.

Aesthetically I have no issue telling you, dear viewer, what I do and do not find to be a handsome design, and I’ll freely admit – when discussing the new 2015 Chevrolet Tahoe – that GM’s stouter, more aggressive design language is a big improvement over its outgoing ‘rabbit-faced’ line-up. But good looks only get you so far (unless you’re Kim Kardashian, in which case for some inexplicable reason they get you voted GQ Woman of the Year). What is the point, I ask, of a big SUV over say a large saloon, which could take on the same tasks admirably? 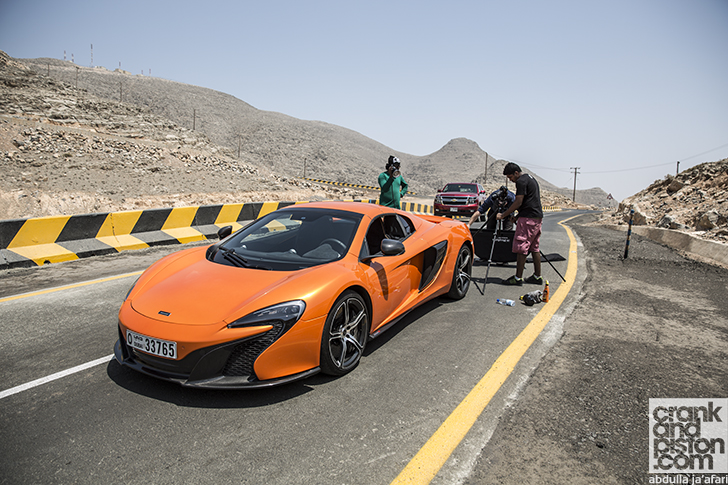 Fast-forward to today. It’s 2pm, we’re 900m up a mountain road in Fujairah, there’s a Tarocco Orange McLaren 650S Spider glinting under both brilliant sunlight and camera flashes to our right, and the temperature is starting to dip into the high 40s. We’ve been on the go since 4am. The last lingering threads of adrenaline from cold coffee, lukewarm water and 30-second cigarette breaks are starting to sag. So far our latest adventure has covered more than 200km and some choice words from security guards at two border controls. We’re all completely knackered, and though the spirit is willing, both the mind and the body have congealed into a fine goo-ey blancmange. We badly need a breather.

Our ‘15 Tahoe rather helpfully comes with third row seating: four of us, nine seats to choose from. Easy. That would be ignoring though the swathes of camera equipment, empty Subway wrappers, laptop bags, lighting rigs and tripods currently taking up position across the back row, which has been folded down to make grabbing motion shots of the McLaren that much easier. Since the rest of the team has already taken its respective positions in the front and mid-rows – with seatbacks and cap peaks now tipped almost horizontal – my only option is the boot itself, and having found a space where only three spare batteries are jabbing me in the shoulder, I stick my legs through the half-opened electronic tailgate and stretch out… 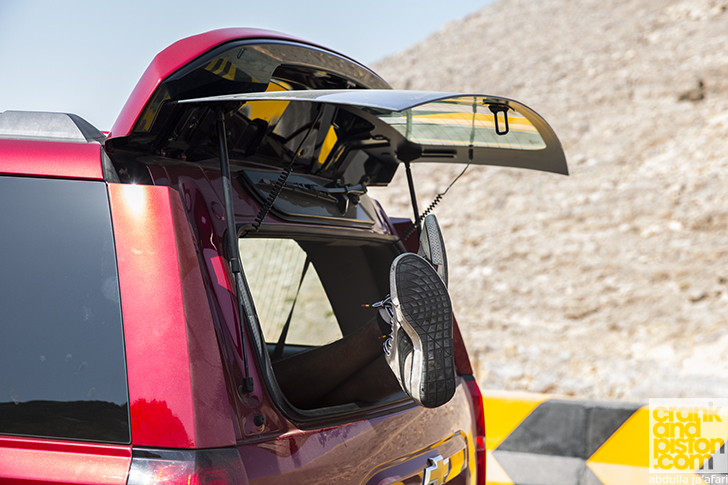 …and am immediately comfortable. Perhaps the heat has had more of an effect on me than I thought, or the muscles in my legs care very little at this point where they take their much-needed pit stop. Either way, it’s not long before the Sandman gives me a thump and I’m out like a light. Twenty minutes later – with the McLaren key thankfully still in my pocket – I’m sitting up and taking stock of our current camera car: grabbing a quick, much-needed kip would not have been an option in even the loftiest of car boot spaces. Quite by bone-idle accident, I’ve found a task that a big SUV can do better than a saloon, and suddenly everyone wants a go.

This admittedly weak ‘eureka’ moment continues in the front of the cabin, where once again the practicalities of the SUV are being revisited through newer, slightly sleep-encrusted eyes. Tip the centre armrest up – capsizing half-empty Coke bottles and an iPhone as we do – and there’s a front row third seat, making conversations around the camera’s viewing screen that much easier: “nah, I reckon you need a lower angle, because you lose the definition of the headlight”; “But you can’t see the background from there…”. It may seem an insignificant point, but trust me, you don’t want too many of these arguments under direct Middle Easter sun. Not if you value the colour of your forehead, anyway… 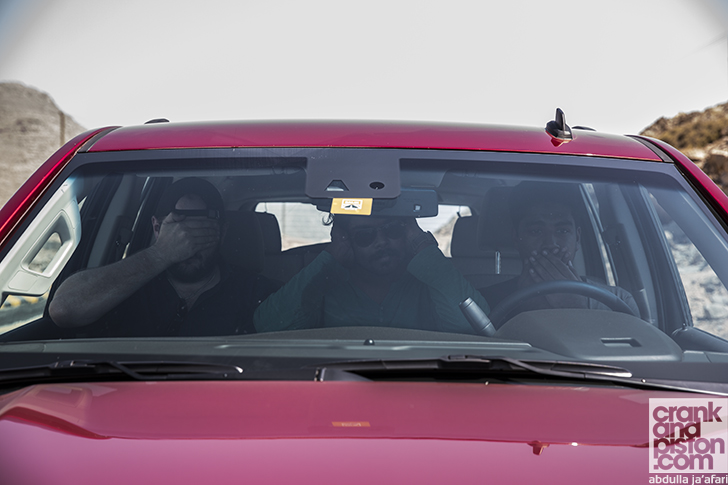 The hidden compartment behind the updated MyLink touchscreen system may be less refined than its pricier, more premium Escalade sister model (Chevy’s uses a button, Cadillac’s a swipe), but also proves helpful for swallowing wallets, keys and loose change we’d undoubtedly have misplaced on the move, be it in the boot or on the mountainside itself. There’s no fear of ruining the seats or trim either thanks to the durable cloth upholstery, as opposed to the leather in GMC’s Yukon (the forgotten middle child). The power lift gate and flat floor also gives lead photographer Arun the space he needs for those all-important McLaren motion shots: whether you frequently hang from the boot of your SUV at up to 40kph is another matter, but it must be nice to know you have the option.

Oh, and just to help matters, the Tahoe also has GM’s natty remote start keyfob. Which again. Is awesome.

It’s only on the way back down the mountain though that I take a turn behind the wheel of the Tahoe. The big column-mounted gear-lever gives me a few extra chest hairs as I pull the big lever forward and down to select Drive. Both acceleration from the 355hp 5.3-litre V8 and gear changes from the six-speed automatic are very smooth, but there’s little that really grabs my attention. True, new electric variable-assist power steering allows me to keep my shoulders in their respective sockets on the tight and twisting wind down the mountain, but I would like some more feel for the front end: when faced with a sheer 900m drop on either side, it’s as well to know where the wheels are pointing. It’s hardly the Tahoe’s fault: any vehicle measuring more than 17ft long, 7ft wide, 6ft high and weighing in excess of 2577kg will struggle to offer the ‘dynamics’ of a drive the petrolhead within me craves, even if said drive occurs off-road. Saying that, the massive 330mm/345mm brake discs do their work admirably, even if the onslaught of a 30-minute drive down a VERY steep winding road means they also need a breather at the bottom of the hill. 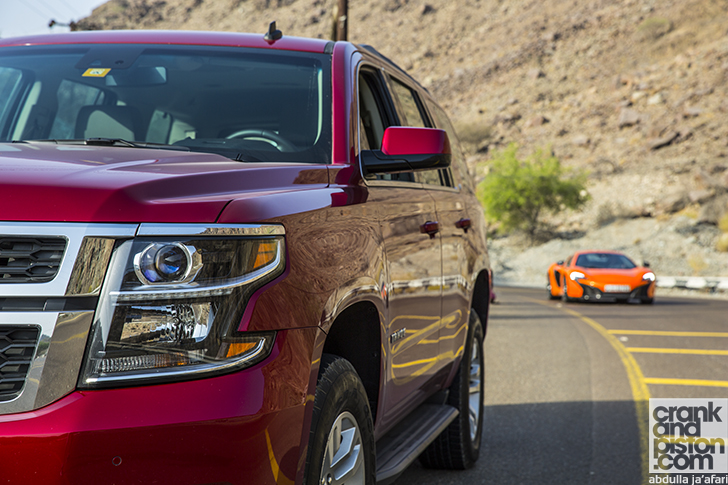 It’s all largely positive then for the Tahoe it seems. Certainly it looks the part, drives nicely and offers the practicalities/durability of which seven-strong families will dream on a daily basis. Karting the crankandpiston digital team around has also been easier than usual, to the point that the guys are now clamouring for an SUV on The Management Fleet for future shoots.  And given the Tahoe’s established popularity in the region, I’ve no doubt the newboy will walk out of General Motors showrooms.

And yet a day in the Tahoe hasn’t really swung my opinion on big SUVs. You could argue that the McLaren key fob in my pocket has distracted me – and you’d probably be right – but even then, I look at the Tahoe, look at all I admire, and still can’t see why I would want a big SUV in my garage. How often for instance am I likely to find myself 900m up a Fujairah mountain, badly in need of a kip?