Drift Allstars descends on the Yas Marina Circuit for round one of the 2016 season. Unsurprisingly, crankandpiston.com was in the mood for some tyre smoking action…

Across the 10-11 April weekend, drift fans in the Middle East were left spoilt for choice with both the opening round of the 2016 Formula D season kicking off on the Streets of Long Beach – ultimately won by Chelsea Denofa – and Drift Allstars starting its season on their own front door at the Yas Marina Circuit in Abu Dhabi (the ‘ultimate drift circuit on the planet’ assured series CEO Niall Gunn without a trace of irony). Hardly surprising then that, as the crowds drew in and the scent of tyre smoke and chicken shawarma began permeating the night sky, there were some notable absentees, reigning Drift Allstars champion James Deane and 2016 runner-up Janis Eglite having opted to go Stateside.

Not that the home town crown were left bitterly disappointed though (sorry JD & JE) with ten international drivers ready to joust with seven of the region’s top performers. That was until the charge of the UAE contingent – led by reigning Drift UAE champion Ahmed Alameri, Sheikh Sultan Al Qassimi and Sheikh Khalifa Al Nahyan – took a tumble.

Alameri himself was an early casualty, his Toyota-supported 86 lining up alongside old rival (and Al Jazirah Ford Racing driver) Abdulhadi Alqahtani in the Mustang for a regional grudge match heading into the Final 8. A potential show stealer went down in flames though, quite literally, as the 2JZ in Alameri’s 86 expired following an oil leak, a second successive failure following the retirement of his 1000+bhp, newly developed Toyota in practice. Local hopes thus fell to Al Qassimi, and though his night would ultimately come to an end at the hands of Norwegian Fredrik ‘Fredox’ Oksnevad, he would still walk away with fifth. 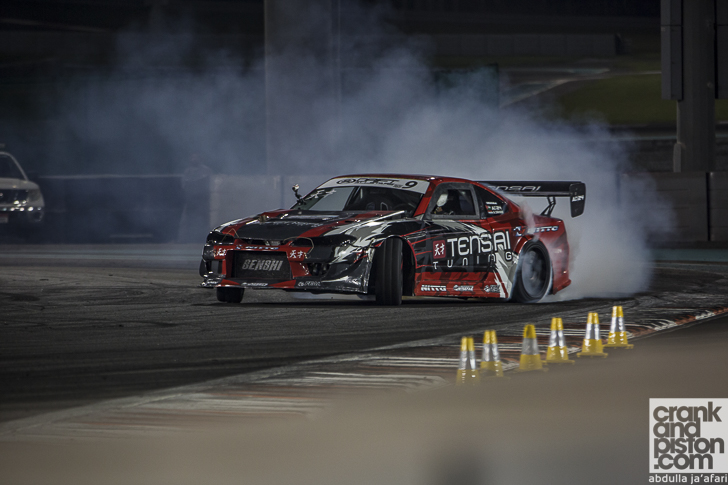 Middle East pride then ultimately lay with Ahmad Daham, the Jordanian’s ‘S13 vs S13’ semi-final one of the highlights of the night against Ireland’s Nigel Colfer, the latter pipped to the badly tyre-scuffed clipping point by the narrowest of margins. Now with only third to play for, Colfer – third in last year’s standing behind only Deane and Eglite – nevertheless overcame Oksnevad to take the final step on the podium, a good if perhaps bittersweet ending to a night that threatened to yield so much more.

Heading into the final, all eyes were on Daham’s S13 Silvia, the Jordanian squaring up against Britain’s Stephen ‘Baggsy’ Biagoni, whose Monster Energy-sponsored, LS-powered S13 had dominated qualifying just hours earlier and had not put a wheel wrong on its competitive debut. The dream result was once again dashed from the crowd’s clammy grip however, Daham’s S13 suffering both gearbox issues and losing one of its six cylinders at the crucial moment, opening the door for Biagoni as a result. With only ‘half a car’ as he put it though, second place was nevertheless a strong result.

Victory at Yas meanwhile belonged to ‘Baggsy’, a determined and rarely challenged run to the flag proving a decisive warning shot to the Brit’s rivals as the Drift Allstars circus makes its way to Lydden Hill in the UK for round two of nine. As you can probably tell, crankandpiston.com was on-hand during the weekend, but for those of you who couldn’t make it, you may want to check out the below highlights video too.