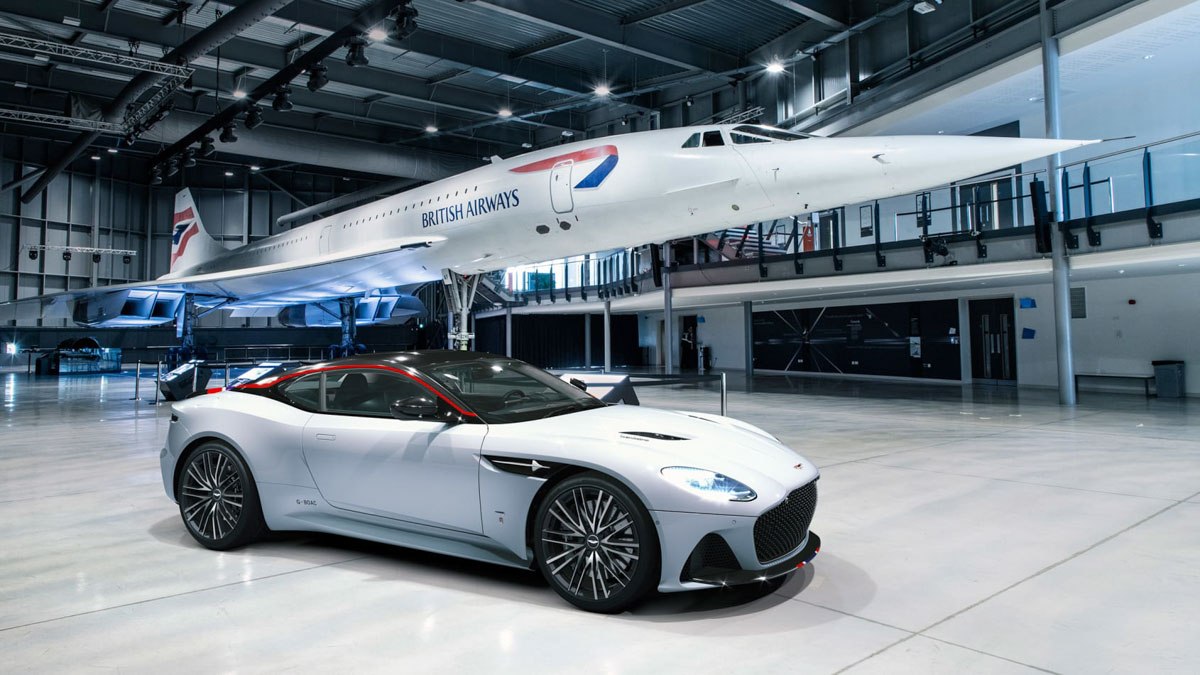 Fifty years since the first flight of the Aérospatiale/BAC Concorde, and sixteen years to the day since the supersonic airliner made its final touchdown, Aston Martin is celebrating the remarkable aircraft’s existence with the debut of a limited edition DBS Superleggera.

Like those cars, the latest special celebrates an incredible part of aviation history. Often celebrated as one of the greatest achievements in aviation, and frequently cited as a design icon, Concorde enabled transatlantic passenger travel on a level that had never been achieved before and has never been replicated since. A flight between London and New York took only 3.5 hours, compared to around eight in a conventional airliner.

It’s fair to say the DBS Superleggera hasn’t transformed road travel in quite the same way, though compared to the average vehicle the car’s 3.4-second 0-100kph time and 339kph top speed still put it in the upper segment of performance road cars.

And Q by Aston Martin has gone to town on the personalisation touches for the run of ten Concorde editions that will hit the road. Commissioned by Aston Martin Bristol – just down the road from where the Concorde was manufactured in the region – each car features high-tech materials and unique references to the special jet.

The car’s side strakes are milled from solid aluminium, while the black carbonfibre roof has a Concorde silhouette graphic. The paintwork itself is a reference to the British Airways livery – a company celebrating its centenary this year – while a small chrome representation of the BA “Speedmarque” can be found above the Q emblems on the front wings.

The interior too has a distinct British Airways flavour, not least in the dark blue trim finish like that of the carrier’s aircraft. The seat facings themselves feature a Concorde logo, while the headliner has a Concorde silhouette graphic chased by lines representing the aircraft’s sonic boom.

Mach meter graphics printed on the sun visors strike us as being slightly tasteless, but paddle shifters formed from titanium sourced from the compressor blades of Concorde’s Olympus engines are a much cooler touch. There are bespoke door sill plates, seatbelt buckle badges milled from solid aluminium, and Terrance Conran patterned floor mats – Conran having been called in to revamp the aircraft’s cabin in the early 2000s.

No price is quoted – if you have to ask, etc etc – but Aston Martin has confirmed that a percentage of the proceeds of each sale will go to the Air League Trust, a not-for-profit organisation that aims to teach under-privileged children how to fly and prepares them for engineering careers.