For Aston Martin, the DB11 marks ‘the future.’ Can the company’s new flagship GT car match up to those iconic letters? We find out on the international test drive in Siena, Italy.

There really is nothing like the sound of an Aston Martin V12 engine firing into life, for those privileged enough to press the go button or those simply standing in awe around the exhaust tips. There’s no mechanical wail of a V10 or low, thunderous roar a la V8, but a crisp bark that gently curtails into a low rumble. It’s a sound now reserved for Aston Martin and LaFerrari owners, and one that elicits several wide-eyed grins in the Siena courtyard we find ourselves in as eight or nine are fired into life simultaneously.

Today this V12 powers the brand new DB11, a car already described as ‘the most important Aston Martin in history’ by company CEO Andy Palmer and a model, much like the DB9 before it, in a position to either make or break the company. And in a radical if perhaps inevitable move, Aston has followed the turbo route for the first time. Those of you ready to sign this off as a ‘travesty’, I urge you to read on…

There is, after all, no heavy-duty corporate backers behind Aston Martin, save a five per cent buy in by Daimler a few years ago. But that’s it. All money raked in is off its own back, and $1.5 million a pop for a new Vulcan or $2-3 million for the new Red Bull Racing-derived AM RB 001 hypercar goes a long way to supporting Aston’s bank balance. Ditto the DBX SUV crossover, expected in 2019. 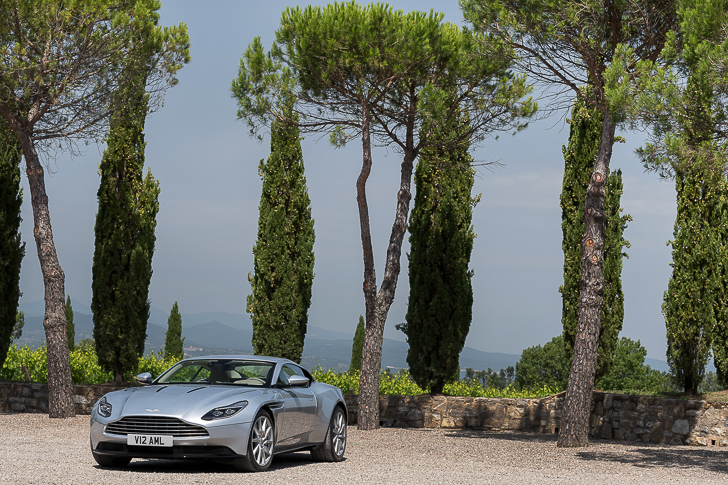 It’s the DB11 though, with those two important letters, that will headline Aston’s line-up for at least the next seven years, and from which the next generation Vantage and Vanquish sports cars will emanate. At the heart of each is a new bonded aluminium chassis, simultaneously stronger yet more flexible than its predecessor in pursuit of a lower centre of gravity and more pronounced cornering. There’s a new suspension setup, plus a sharper yet simultaneously more fuel efficient seven-speed automatic gearbox. The headline though is that 5.2-litre twin-turbocharged V12, new from the ground up and similar to the outgoing naturally aspirated 6-litre bulk only by way of the ‘V’ cluster. Power is a mighty 600bhp, torque an equally impressive 516lb ft, and 0-100kph is chalked up in less than four seconds. In terms of sheer numbers, only the One-77 better it. Given the potential on offer, and the future to come, the DB11 can’t afford to be a dog.

Given the manner in which the Siena courtyard beneath us is rumbling, I’ve already signed off on the soundtrack, and it’s a similar story with the design, which manages to find a balance between menace and timeless elegance that any ‘DB’ must adhere too. While the rear end doesn’t quite hold the same grace as the DB9 for this particular writer, I’m clearly in the minority today – you may even be writing your angry letters in CAPS LOCK even now – so I’ll let that drop. Plus the two-tone bodyline over the beefed up rear wheel arch and those 20in alloys pluck immediately at my heartstrings. Another tick in the box for chief designer Marek Reichman. It’s not until I closet myself with barely contained gusto in the hot seat though that more than a decade of design progress really hits home. The cabin is simply stunning, a mass of subtle aluminium trim and high quality leather that make the once benchmark interior in the DB9 seem positively ancient. Joy of joys, the archaic infotainment system and stupid controls for such have been ripped out by the screws and replaced with Mercedes’ familiar 8in LCD screen and switchgear. There’s even sufficient head and legroom for those us over six feet tall, unheard of in DBs of old. Another tick.

“Given the manner in which the Siena courtyard beneath us is rumbling, I’ve already signed off on the soundtrack”

I can already feel my enthusiasm for the DB11 growing as we hit the road, and not just because driving an Aston Martin on Ferrari turf offers me a James Dean level of bad boy-ness. On the opening highway stretch of our test route, the cushioning for instance of those new multi-links at the rear make the ride, yes, a bit firm, but still wonderfully comfortable versus the stiffened nature of the DB9. Ditto the seats, which offer more than sufficient lumbar support for mountain-side hoonery without causing irreparable damage to your spinal column. This is after all a GT car, and with Aston Martin keen to widen the gulf between the soon-to-arrive DBX and the Vantage/Vanquish sports car road racers – what Aston calls it’s ‘triangle platform’, akin to a three-legged stool – it’s an important character trait for the new DB11. More than 400km of Tuscany positively floats by.

But don’t think this means the DB11 has gone soft. Oh, you’ve really no idea.

Settings for the damper and engine are threefold, ‘GT’, ‘Sport’ and ‘Sport+’ accessible via two thumb controls on the steering wheel. And even in soup-like GT mode, power delivery is immense. Titanic initial pick-up soon spools into solid mid-range grunt, meaning you’re suddenly going very, VERY fast, very VERY quickly. Enter that mighty V12 soundtrack, which somehow manages to kick up another heart-tugging octave into the higher revs. It’s a drama and a civility that shouldn’t work, and yet somehow make the DB9’s efforts look feeble.

It’s a thunderous burst of acceleration made all the better by the eight-speed ZF automatic. Changes are seamless, but with a delightful ‘punch’ of momentum as the revs change. Mercifully, that five per cent buy in didn’t include AMG’s nannying transmission, meaning the revs can be held almost to bursting point at 6500rpm. Here’s an Aston you can really hustle through the turns.

We’ve been told beforehand that the DB11 power steering has switched to electric away from hydraulics, one eye firmly on fuel efficiency and another on Daimler’s automatic assisted parking system. You’d hardy notice though, such is the beautiful wave of feedback coming from the front wheels. As we begin our climb away from the highway and up into the sinuous mountain tarmac, it’s not long before ‘Sport’ engine mapping is selected. A far more brusque form of delivery, a sharp bark of engine notes assuring me that the power delivery – hardly lacking in oomph already – will become much more measured. Indeed, it’s a civilised ferocity that the rear wheels struggle to properly leash on these fantastically slippery Italian roads. The surface is like glass, and the traction control has to fight to stop the back end kicking out entirely (drive less like a lead-footed oik and this ‘problem’ is quickly rectified). The utterly superb balance is more than a match for even these tight and slippery roads too, allowing me to place the front end with more élan and confidence than the DB9 was previously capable.

At first this section of the route is done with ‘Sport+’ damper settings – in for a penny – but before long I’m back in ‘GT’, the widely undulated and rutted Italian tarmac causing the nose to bounce ever so slightly at higher speeds. Not to uncontrollable levels, but enough to make me more work harder at the wheel than necessary. The drive is certainly no less fruitful: the ride quality is still excellent with I’d say 90 per cent of the suspension’s capability. How will this fare in the Vanquish? I’m champing at the bit… 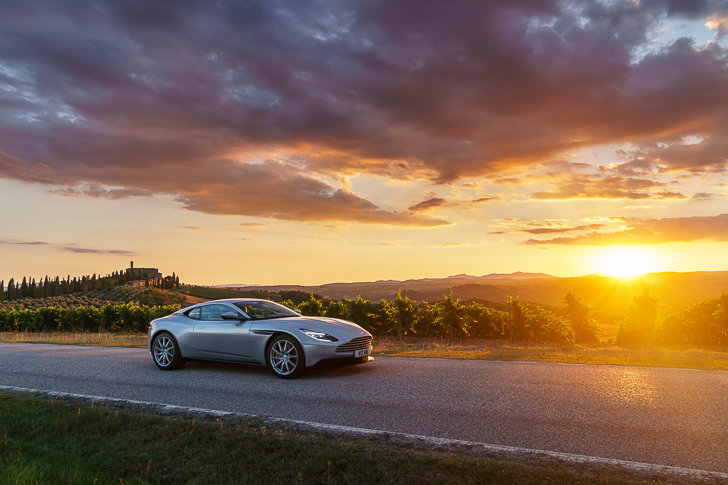 Issues? They’re paltry, and some even border on nit-picking, but hey ho, the hard life of a motoring journalist. Even underneath that superb V12 soundtrack bombarding the cabin, there’s a faint mechanical whir around the 3-4000rpm mark as the turbos spool up that, once heard, can’t be covered. It’s not an overly unpleasant sound but does take the smallest of shines away from it, as does the quite impressive amount of wind noise floating past the door mirrors and through the cracks in the door. The sheer size of that bulky bonnet and that slick windscreen means the car will take a while to shrink around you, and while the cabin design itself is a gorgeous one, the driver instrument panel – mounted the way it is – does look a bit of an afterthought. I’m also particularly saddened to find a Stop/Start button where in the DB9 we’d slot a glass-topped key fob into the dashboard. One of the more notable dramas of Aston Martin ownership.

Deal breakers? Not even close. If the V12 soundtrack and fabulous design weren’t enough to give your chequebook dirty thoughts, the DB11 also offers the elegance and excitement that made Aston Martin, though underneath that lies a more refined electronics system, a cabin design and utility finally worthy of the wings on the bonnet, and a drive so accomplished, so spectacular and so effortlessly quick and entrancing that it’s one of the rare occasions where returning our test car took a couple of attempts: “oh come on, just one more blast though the hills, ten minutes…”

The DB11 marks the start of a brand new chapter for Aston Martin. And on this performance alone, it should be a breath-taking one.

Oh, and did I mention that V12 soundtrack? 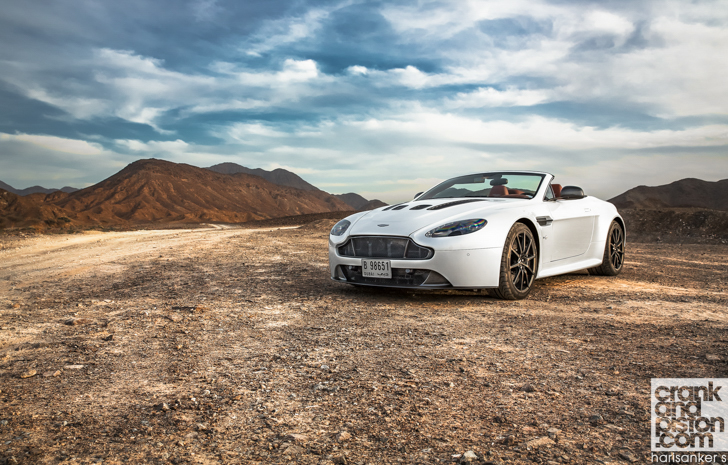 Why every Aston Martin should be a Rapide S