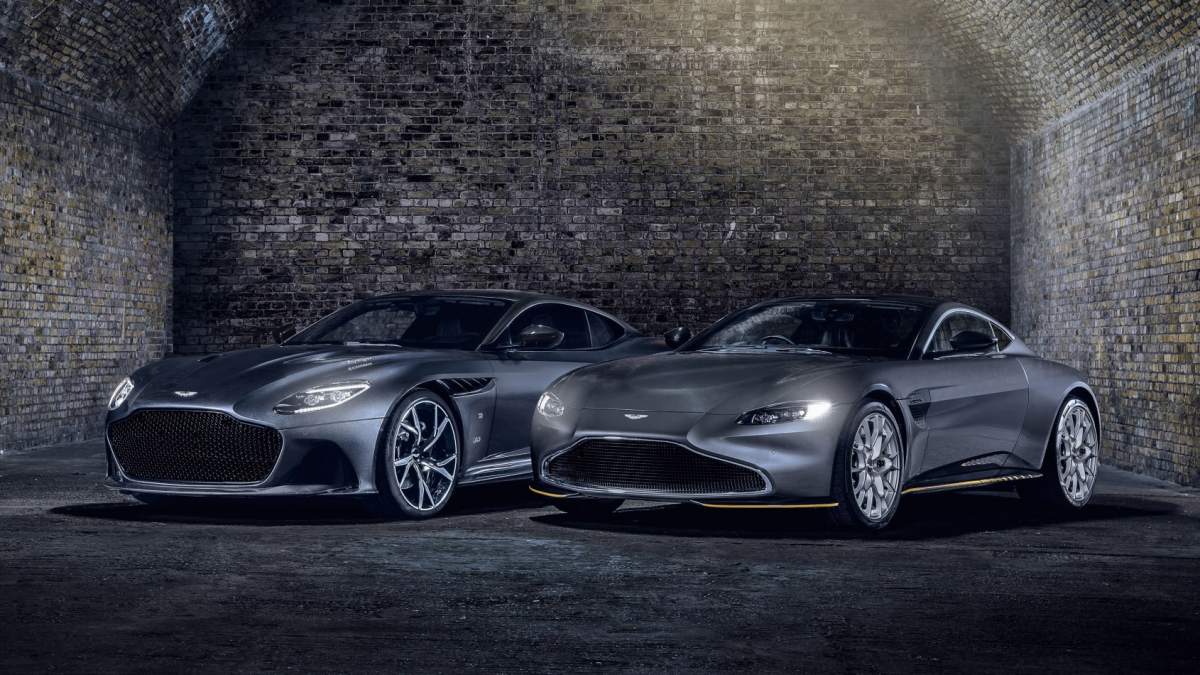 The two models are the DBS Superleggera 007 Edition and Vantage 007 Edition. Both feature bespoke styling and trim elements that reference the new film, while the latter car also has a nod or two to Bond’s 1987 adventure The Living Daylights, which featured the much earlier V8 Vantage.

Starting with the Vantage, Aston Martin’s Q department has applied dark Cumberland Grey paint to contrast with a bespoke mesh grille insert in the new, more subtle front bumper design that was introduced when the Vantage Roadster launched. This is also framed with slim brightwork, which is then complemented by a bright optics package that includes silver wheels and roof strakes.

The groundwork trim is then highlighted in yellow pinstriping, which rises up and across the rear diffuser with angled stripes that reference the missile graphics on the aforementioned 1987 movie car.

The interior is finished in Obsidian Black, but the devil is in the detail with bespoke vertical ribbing on the carbonfibre-backed sports seats, a laser-etched gadgets panel (sadly non-functioning) inside the centre console, and laser-cut target graphics applied to new black-finish paddleshifters. There are even ‘f-holes’, like those you’ll find on string instruments from the violin family, printed on the headrest area of the carbon seatbacks – a reference to the Living Daylights chase scene in which ’80s 007 Timothy Dalton makes a getaway in a cello case. (Yes, that really did happen.) For the full experience, buyers can also specify skis and ski carriers on the rear tailgate, the former matching the yellow pinstriping.

Rather than referencing a vehicle from a previous Bond film, the DBS Superleggera 007 Edition is instead specified identically to the example that’s about to star in No Time To Die. The bodywork is painted Ceramic Grey, a darker hue than the Vantage, with the roof, mirror caps, splitter, diffuser and rear wing all finished in dark-tint carbonfibre. The 21-inch Y-spoke wheels are diamond-cut, with monotone black calipers behind. Inside, the black leather trim is offset with contrast red stitching, and a subtle buckle-like badge placed on the centre console.

Both models are limited in number, the Vantage to 100 units and the DBS Superleggera even less at just 25. The bespoke work will be completed by Aston Martin’s Q personalisation department, with first deliveries due to begin in early 2021. Prices will sit at $213,000 for the Vantage, around $53k more than a standard model, while the DBS costs a more substantial $369,763, which is over $66k more than standard. No Time To Die is current scheduled to be released on 12 November 2020.