Alfa Romeo has always had a bit of stigma to its name. Reliability and quality have all been questions along the years. Well, that IS all about to change. And I don’t say IS, lightly.

Originally introduced back in 1962, we’ve not seen another Giulia since it went out of production in 1978. The new Alfa Romeo Giulia is the next model in the Italian carmaker’s line-up and the only saloon it has made since 2011.

Well, do we really need to tell you just how lush this model looks?! All you have to do is look at the pictures, above. The new Alfa Romeo Giulia looks incredible and has no trouble rivalling the likes of the Audi A4, Mercedes C-Class or BMW 3-Series in the design stakes.

The Quadrifoglio uses a number of ultralight materials such as carbon fibre, aluminium, aluminium composite and plastic, extending the use of carbon fibre also to the roof, bonnet, front splitter and rear nolder, to obtain the best weight-to-power ratio it can offer of less than three.

To the front of the model are Xenon headlight units. The car comes sat on a choice of 17-inch or 18-inch alloy wheels. And it also gets a new active aero splitter to the rear, providing assistance with aerodynamics.

To the inside are Alcantara upholstered sports seats, sports steering wheel with red ignition button and carbon fibre inserts, alongside a new 8.8-inch Connect 3D satnav system. It’s a decent enough satnav, but the whole design of the infotainment system is somewhat dated (along with the rest of the interior). It seems a real shame to compromise on the interior when that exterior looks so darn awesome.

The Quadrifoglio version produces a whopping 503bhp from its 2.9-litre V6 BiTurbo petrol engine, with an unladen weight of 1,524 kg and a weight-to-power ratio of 2.99 kg/hp – resulting in the most powerful road-going Alfa Romeo ever made.

The accelerator responds immediately, while being smooth. There is a howling top-end to the rev range, though, and it doesn’t rev past 7k rpm, either. Despite that, the model does go some, and actually has more characteristics of that of a naturally aspirated engine, regardless of being twin-turbocharged. The model is said to reach 100kph, from start, in 3.9 seconds, before hitting a top speed of 308kph. Reports have also rumoured that the engine could be used in a future Ferrari, however, that’s yet to be confirmed.

Now, we’re aware there’s a shed load of power under your feet in this thing, but the real star is how well it handles. For a rear-wheel-drive set-up, it’s surprisingly planted and has a good deal of grip at the front end, so you’re able to confidently chuck it into a hairpin or two, without feeling like you’re going to come off track. Steering has good weight to it, while being direct, adding to its agility on road. Exclusive to the Quadrifoglio version, the Torque Vectoring technology uses a double clutch to the rear differential, which distributes torque between the two wheels, making it power distribution additionally successful in conditions where you have less grip. The Alfa Active Aero Splitter also aids in downforce at high speed.

And if you’re feeling brave, there’s also a Race mode, which turns off driver aids such as traction control, while improving throttle response and suspension set-up.

To say I’d buy one over the likes of the BMW 3-Series may well, yet, be a bit strong. However, this really is a truly great car from Alfa and should in fact do them proud. The head of design actually called the car its ‘make or break car’ in an interview, which took place at the model’s official launch, at the company’s proving ground in Balocco, Italy. The sheer fun of the rear-wheel drive system is manageable, even with that massive power output. The Giulia range is said to start from $40k, although, price details for this top-of-the-range Quadrifoglio have yet to be announced. 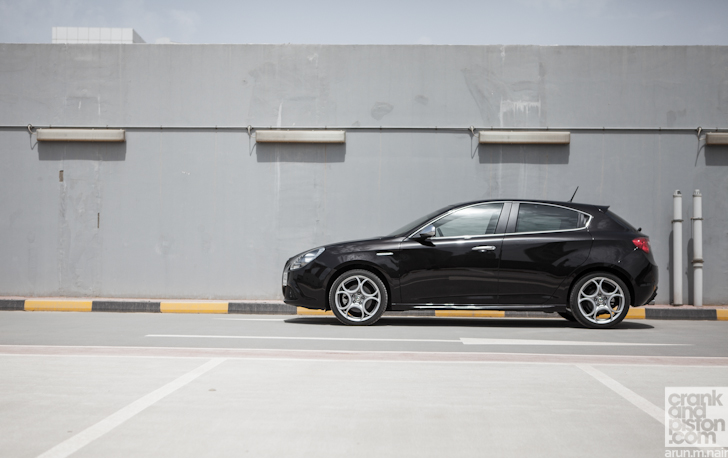