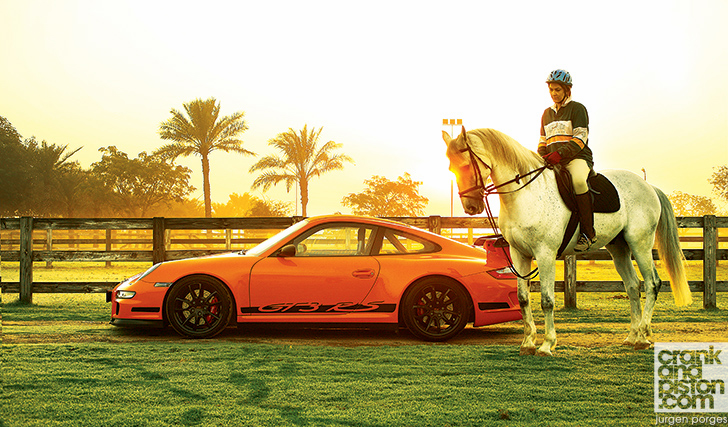 The new GT3 RS is better in almost every way. The masters of evolution have succeeded once again. The new RS shifts better, sounds better and simply goes better. The 997’s interior is more functional and better built. The evolution of the 911 RS has clearly taken another step forward with this latest model. The new GT3 RS is clearly faster yet is also more drivable on both the road and the track. In the hands of mere mortals this will be even more pronounced.

This said, although not as fast, I remember the old 996 GT3 chassis as being more predictable on the track. I assume the move from the superb fixed-rate dampers to the new PASM system probably explains this. The GT3 RS has moved to a new level with the 997. While the 996 GT3 RS challenged the concept of its RS lineage with electronic aids in the form of anti-lock brakes and engine management it was still relatively simple and pure of purpose. The new 997 GT3 RS adds to these driver aids selectable power output, traction control, PASM, variable-ratio steering and an exhaust system that alters its soundtrack with the press of a button.

What this means is that in a new 997 GT3 RS the car does more and the driver does less. For the pure performance driving experience that the RS badge has come to symbolise, this raises the only real question challenging the crown of this latest evolution of the 911 RS. Have these changes diluted the pure sports driving experience and has the 911 RS lost some of its basic character?

The early 911 RS models all stood tall for their performance at that time. The link between the RS badged 911s and the 911 racecars plying their trade on the racetracks of the world were very direct and undeniable. The concept was simple and pure; these were road registered racecars. You could drive them on the road but they were born of Porsche to be raced on the track. But stringent safety and environmental standards combined with the social responsibility of a large corporate company like Porsche and the never relenting technological rate that racecar manufacturers must run to lead the competition on track and the gap between the road-going RS and the racecar it mirrors inevitably widens. And so too with it a dilution of the purity of concept born of the original 911 2.7 RS.

But this is Porsche Theology, an almost academic debate for those longer in years. Coming to terms with this is a dilemma that the first time RS buyer will probably never appreciate. The looks, grip levels, power and sound of this latest RS will win them over. They will marvel in the capability of this amazing car and extract innumerable pleasure from time spent behind the wheel. And for Porsche this latest incarnation of the RS ensures that the 911 RS line still remains the benchmark for road-racecars.