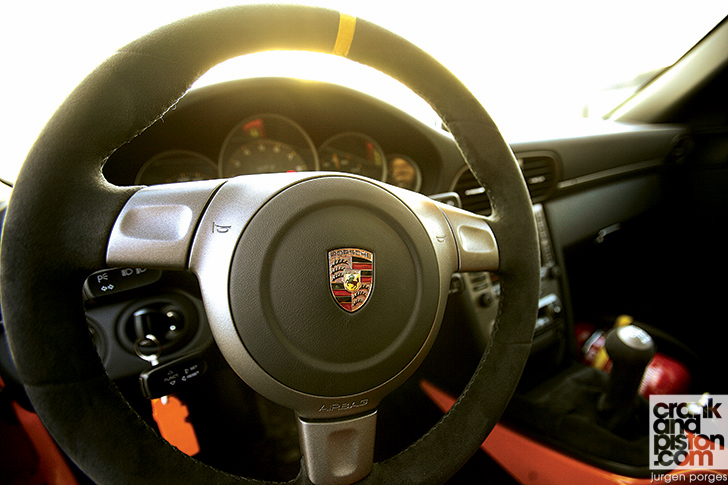 But back to the 997 GT3 RS sitting in front of us. First up is aesthetics. A man will often put up with a lot of faults for a beautiful woman, so too his sports car. The look of a car will always disproportionately squew both owner and observers’ perceptions of a particular model. No truer example being pre-Audi Lamborghinis. Their extreme design curves and angels, their form over function design philosophy managing to override the day-to-day difficulty of living with such an impractical plaything.

Enter these two bright orange 997 GT3 RS. They announce their arrival with all the subtly of a fire engine with its sirens on. The bold colour options of the new 997 RS do a much better job of differentiating this RS from its rank and file stable mate GT3s that the 996 did. The previous model offered only two colour options: coloured wheels and stickers in red/blue over white only. With the new RS you can choose four colour ways: orange over silver, black over green, orange over black and what appears to be the most popular option with the punters, the black over orange we see in our two test cars. As with the 2.7 RS red and blue of the 996 GT3 RS, these colours have history in performance Porsche 911 lineage. However, the link to the RS bloodline is a little weaker.

Donning sunglasses and standing back to take in the curves of the new RS we find a welcome return to that gorgeous fat rear end the 996 robbed us of and that with the 997 Porsche has now, at least in part, returned. Forty-four millimetres wider than the Carrera S shell of the GT3, the 4S shell of the GT3 RS does the best job of the big fat curvaceous rear since the 993 Turbo and 4S. The subtly of the 21st century has dulled things down a little, but its there.

The large purposeful single plane carbon rear wing of the RS is fabulous to look at, it is a perfect synergy of form and function. At the front, the flat-black spoiler lip and radiator exhaust ahead of the bonnet send a clear message that this 911 means business. 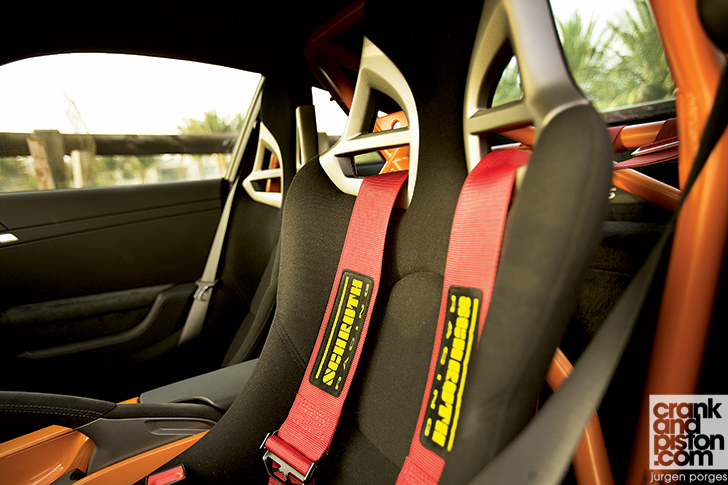 Before climbing into the RS, it pays to remind yourself of the race-style carbon GT seats to avoid an unwelcome clash between your posterior and their hard sides. Once installed, you find yourself sitting lower than in the 996 GT3 RS. The benefit, especially for taller drivers, is a clear view of the large grey central tachometer and four smaller, black-faced dials borrowed from the Carrera GT. Combined with yellow hash marks and needles this instrument cluster is superb. There is a large centre console screen supporting the satellite navigation, stereo and sports chrono controls. Useful, but as for the place of such ‘non-performance’ features in an RS, I am not so sure.

On the inside, it’s black or nothing. This will suit most owners just fine. Combined with touches of grey Alcantara to the roof and door lining, gear knob, handbrake and, if requested, the steering wheel. The interior works nicely.

The carbon seats locate the driver well and save weight, but sacrifice an airbag on each side and easy access to the rear storage area. The colour-coded rear roll-over protection looks purposeful, but intrudes somewhat on the view from the central rear mirror and certainly robs the rear of its usefulness as a storage area. 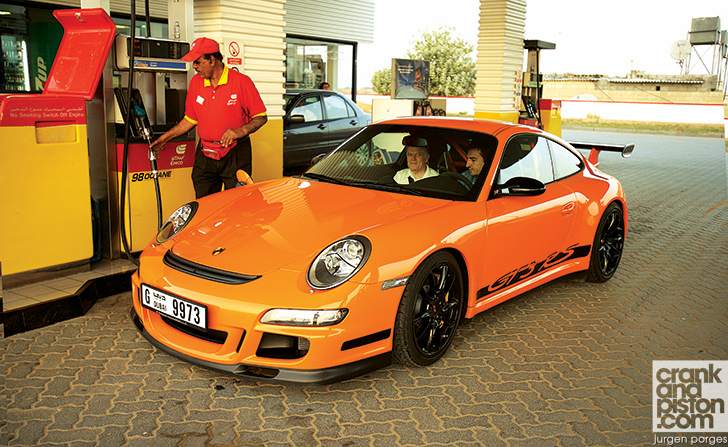 Shut your eyes, turn the key and fire the flat-six into life and you immediately sense there is something special about this 911. The GT3’s engine idle is lumpier than the 997 Carrera. At idle, the car trembles a bit, but this sensation does not feel as pronounced or intrusive as in the old 996 GT3 RS. The rattle from the gearbox disappears with a push on the clutch, which along with the shifter are both markedly heavier than in the standard Carrera, but are still quite comfortable for daily road use.

Clutch in, first gear engages with a pleasant directness and after a quick look out of the side view mirror over those gorgeous bulbous rear guards, the RS edges out into Dubai traffic without any fuss at all.

Below 4000rpm the flat-six is tractable and with the sport button activated the soundtrack is stronger and fuller from 3000rpm. With the sport button deactivated the exhaust’s vacuum-operated flaps don’t kick in until 4000rpm. If you floor it the flaps open automatically regardless in either mode. Designed presumably to try to pacify the environmentalists and wives as well as keep the hardcore driving enthusiast happy. However, one can’t help but feel it is all a bit artificial. An unnecessary complication in a car supposed to represent purity of purpose. A mute point perhaps, as above 5000rpm these subtleties are all quickly enveloped by the mechanical scream anyway.

The 381bhp 996 GT3 flat-six seemed the perfect naturally aspirated power plant, but somehow Porsche has managed to improve it even further. It builds revs and speed at a prodigious rate like the old car but feels much stronger and meatier across the whole rev range. Weissach’s engineers continue to amaze, extracting not only more power from the 3.6-litre, but managing to deliver it with improved linearity. The car feels fast thanks to the torquey flat-six’s superb throttle response – eat your heart out 997 Turbo owners – and an insatiable appetite for revs. 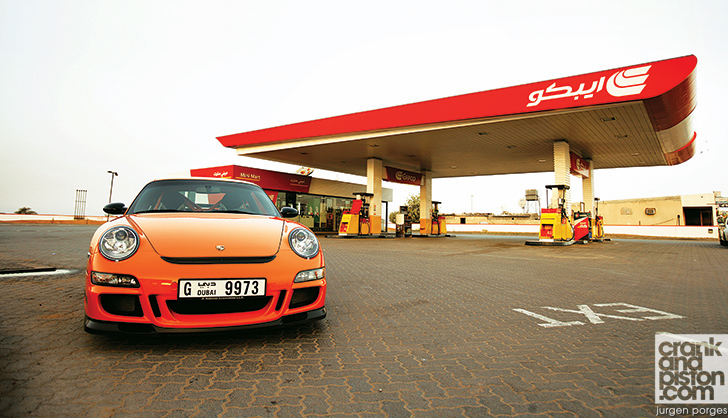 The PASM equipped suspension of the new car is firm, but not harsh or jarring. The ride is obviously much stiffer than a normal 997, however, it remains more than acceptable for the most sporting of 911s. Porsche, too, has made a real improvement in straight-line behaviour at highway speeds. Cough and it doesn’t change lanes, sneeze and it doesn’t change zip codes.

Fifty kilometres of undulating desert-framed straight road passes under the nose of the RS, punctuated only by a smattering of roundabouts, before the twists and turns of the Hatta mountains appear. Gobbling up these flowing roads, the grip from the Michelin Sport Cups feels immense. The car is extremely well planted. The edginess of the 996 GT3 RS is almost gone while there is still real precision in the chassis. The nose sticks very well. Better than the 996 GT3s did. Will it still turn-in as crisply as the 996 GT3 RS out on the track? Only time will tell. How well will the chassis and its semi-slick Sport Cup tyres cope with a wet road is something those living in the Middle East and lucky enough to own an RS will probably never discover.