Dodge drops the silks from the new 840bhp Challenger SRT Demon at the New York Motor Show. And it’s officially the fastest production model ever on the quarter mile

Just some of the supercars that the latest mad bastard from Dodge out-powers, the new Challenger SRT Demon ousting the 707bhp Challenger SRT Hellcat from the top of the muscle cars standings in the process.

Said 640bhp is produced by the same 6.2-litre supercharged HEMI V8 as found in the Hellcat, not that Demon customers should feel short-changed. Power is up from 707bhp in the Challenger Hellcat to a whopping 840bhp in the Demon. Torque has also been given a nudge, rising from 880Nm (650lb ft) in the Hellcat to 1,044Nm (770lb ft) in the Demon. Dodge has also kitted the V8 out with a larger, 2.7-litre per rev supercharger with 14.5psi increased boot pressure and a high rev limiter, now 6500rpm compared with the Hellcat’s 6000rpm.

And as you’d expect, straight-line performance is quite impressive. An eight-speed automatic transmission sends power to the rear wheels, which are kitted out street legal drag rear radials. A drag-spec Transbrake meanwhile holds the power on the line before launch, the first use of such a system on a production road car. Dodge claims that 0-100kph is in the books in just 2.3 seconds – a full second clear of the Pagani – and that a quarter mile is completed at full lick in just 9.65 seconds, a Guinness World Record. If that’s not enough to impress you, Dodge has stated that the Demon can produce up to 1.8G under heavy acceleration.

We cannot display this galleryA ‘Demon’ monikered neck brace though is not part of the options list for the newboy, though Dodge will not leave you disappointed. Customers will receive Demon-branded track tools and performance parts, narrow front-runner drag wheels, and other ‘components that fully unleash the car’s potential at the drag strip’ as part of the ‘Demon Crate’, though full prices for the Demon have yet to be released. It’s not just additional fluff that’s made its way into the 840bhp madman though: up to 91kg of weight has been shed over the existing Challenger, meaning the front passenger seat and rear bench have been removed. Spend the extra $1 though and these, plus carpeting, will be put back in,

Much like the Hellcat, the Demon also comes with two keys, one Black, one Red. The Black key limits power to a leisurely 493bhp, while starting the engine with Red keyfob unleashes 797bhp of pure, tyre-killing fury. Bear in mind though that, if you want that full 840bhp potential, you’ll need to brim the tank with 100 Octane.

Here’s the kicker though. Dodge has confirmed that only 3000 will be made for US customers, and 300 for Canadian customers. What this means for interested Middle East clients, we shall have to wait and see.

You can check out more Dodge articles HERE 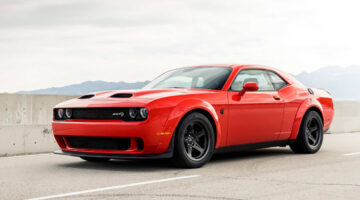