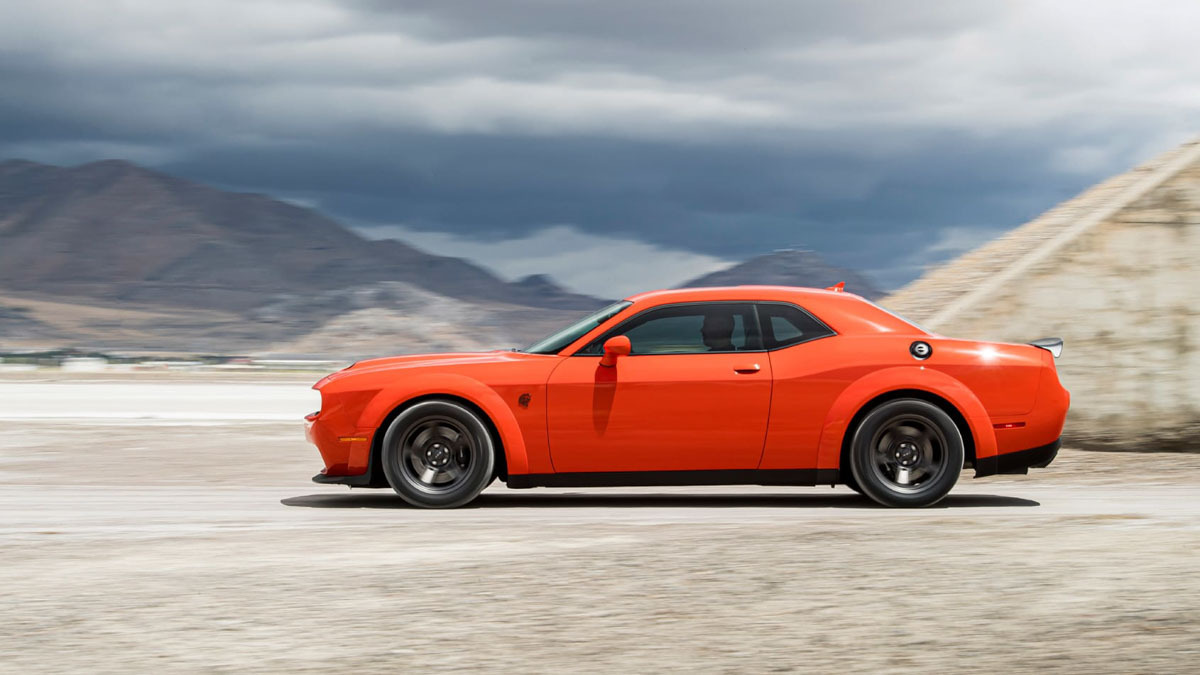 It’s the gift that keeps on giving for Dodge. Some 12 years after its original launch in 2008, yet another derivative of the Challenger muscle car has been revealed, this one even madder than those which came before it. It’s called the Challenger SRT Super Stock, and combines a selection of elements from previous Hellcat, Demon and Demon Redeye models (only an American company can have a nameplate history like that) to create the maddest Challenger yet.

Starting with the typical HEMI V8, Dodge’s engineers have liberated yet more power from the 6.2-litre unit, which as usual is supplemented by an enormous supercharger which dominates the entire powertrain. Peak power is rated at 807bhp, which is about 10bhp more than its earlier Hellcat Redeye application that Jethro Bovington recently drove in the US. Torque is also suitably massive at 707lb ft.

This power is sent to the rear wheels via an eight-speed automatic transmission, which will get the Super Stock to 96kph (not 100kph, mind) in 3.2sec and on to a limited 270kph top speed.

But we’ve seen these sorts of numbers from Challenger models before. What’s new for the Super Stock are the chassis upgrades that Dodge is hoping will help contain some of the fury that in standard models is quick to overwhelm the ’90s Mercedes-Benz-derived chassis (we’re not kidding).

New for the Super Stock are adaptive Bilstein dampers calibrated specifically for this model, while the 18-inch wheels – tiny by today’s standards – are wrapped in radial semi-slick tyres that are 11 inches wide. It also packs a set of Brembo brakes and a limited-slip differential. Underpinning all this chassis work is the widebody form this Challenger features, there to contain its big rubber footprint.

The rest of the package remains largely the same, but as it’s arguably the design which has kept this car popular for over 12 years now, this is no surprise. So, if an 800bhp widebody muscle car is just what you’re after in the midst of a growing pandemic and a bubbling financial crisis, the Challenger SRT Super Stock might be it.