crankandpiston takes the brand new 2015 Cadillac Escalade ESC for a spin across Georgia, America, to find out whether bigger is always better.

I’ll be perfectly honest, I don’t really ‘get’ big SUVs. Sure, for karting the extended family round at the same time – plus a dog, camping equipment, the groceries and the occasional surfboard – the amount of space at your disposal is a big plus. And if you are the kind of person who simply has to be the centre of attention in everyone’s wing mirrors or are particularly conscious of occupant safety on the road, then the sheer size of the behemoth once again ticks all the boxes. But for me, with no family in tow and harbouring a desire to avoid road accidents rather than prepare myself for impact, I struggle to understand the true benefits of big SUVs. What do they offer for instance that a big premium saloon does not?

So when Cadillac kindly invited crankandpiston.com to the international launch of the new 2015MY Escalade in Savannah, Georgia, several feelings washed over me: getting first-hand knowledge of any new model – particularly in a part of the world as stunning as mid-west US – is always exciting, but would my personal misgivings on the model type spoil what could otherwise be a good car? I had two lengthy cross-Atlantic flights and a 200km test drive to find out.

Time was that the Escalade – a little rough around the edges as it was on its debut in 1999 – was seen as a critical misfire for Cadillac, thanks to woolly handling and questionable looks: the SUV was even ranked as the second most stolen vehicle in the US at one point, consequently putting a dent in many an insurance premium. Just over a decade later though and there’s been some serious changes to Cadillac’s formbook. New looks – in a Sopranos bling kind of way – injected the Escalade with a much-needed dash of cool, while more cabin space (including eight-person seating) and a rejuvenated engine line-up ensured the second gen model was feistier and more practical than more established rivals like the Range Rover and the Lexus LX, traits Cadillac further embellished with the third generation in 2007. For the past seven years, strong sales and a striking reputation have established the flagship Escalade as Cadillac’s most popular model. Re-inventing the Escalade then for 2015 was not going to be easy. 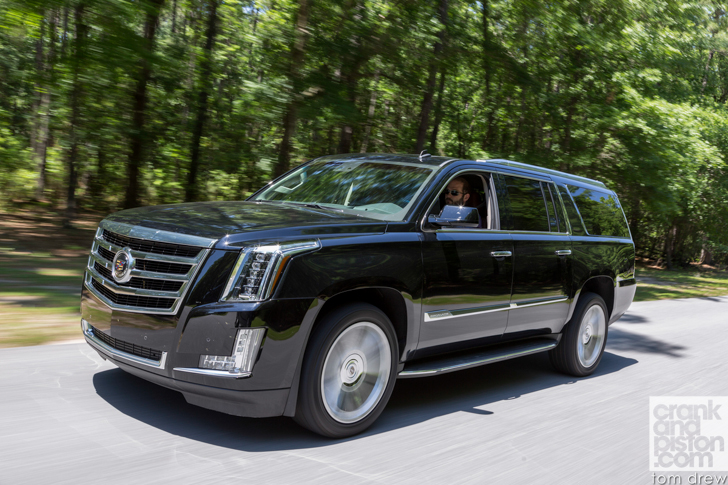 Looks-wise it’s a strong start for the 2015MY, the previous gen’s slightly gormless features having received some important Botox injections. The massive front grille for instance is a major step up over its predecessor, the angry chrome dwarfing the slick, angular headlights to create a very imposing look at the front. The bonnet grooves and slick air intakes in the front bumper meanwhile are almost comically elegant by comparison, and yet seem to find the balance between “what you looking at” and finesse surprisingly well for an SUV that measures just over six-feet tall and just under seven-feet wide. Throw in some 20-inch aluminium wheels, Black Raven paint, and some chrome-tastic running boards and door strips, and the new Escalade really does look the business. Cadillac admits it has tried to tone down the ‘urban cool’ reputation the Escalade has garnered in its new model, but Cadillac’s Art and Science design philosophy has made this tricky. And in my opinion, that’s for the best. The new Escalade really does look very good.

Inside we find Cadillac’s now established fine build quality and all-purpose leather, complete with a rather tricky veneer trim. The transmission tunnel running between the front seats is massive (rather aptly) creating as it does a little cocoon for both driver and front passenger: given the size of the cabin, this actually works rather well. Multi-way electric seating, reach and rake options for the steering wheel, and moveable pedals make finding a good driving position pretty straightforward too. There’s also plenty of visibility through the massive windscreen and over the left and right shoulders thanks to re-designed C-pillars, which have been straightened to help passengers scramble into the back. The main story however is at the rear, where the second row bench has been ditched in favour of two bespoke seats for improved comfort. These can be folded all the way forward with just two presses of the pillar-mounted buttons. Mark the calendar and tell your children about this day too, for Cadillac has made third row seating that normal-sized human beings can actually sit in comfortably. 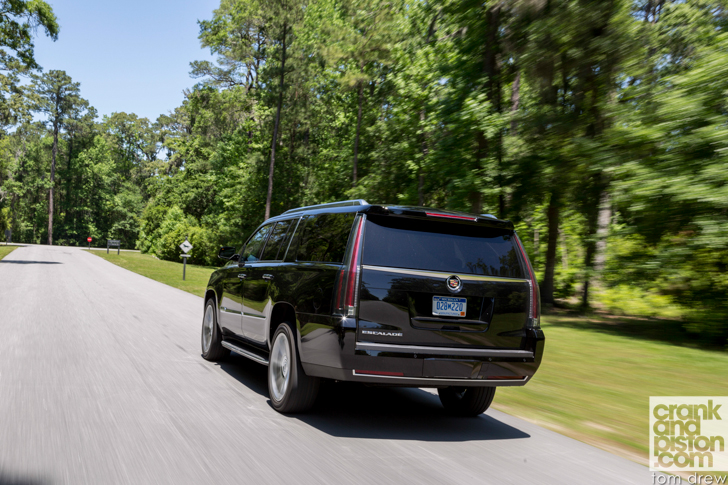 The other big update is the new 6.2-litre V8 under the bonnet, which kicks out 420hp and a sizeable 459lb ft of torque (up from 403hp and 417lb ft respectively). On the move, the torque in particular proves impressive, especially when in the lower revs. There’s a very discernible pull from the low end, and though you’d hardly call the engine heft aggressive, it’s certainly gutsy. Pass the 4000rpm mark and the guts do sag a little, and thanks to a 2739kg kerb weight (which is always there no matter how hard you try to forget it), you couldn’t really call the Escalade ‘fast’. Still, a 6 second 0-100kph time (or 5.96 sec as Cadillac would prefer we say) for the big 4WD-er is nothing to be scoffed at.

So far so practical then, and having proven with a quick impromptu test that my 6’ 2” frame actually can actually lie down in our long wheelbase ESV model, it seems only a matter of time before my previous hesitancies concerning big SUVs are lain to rest, right? 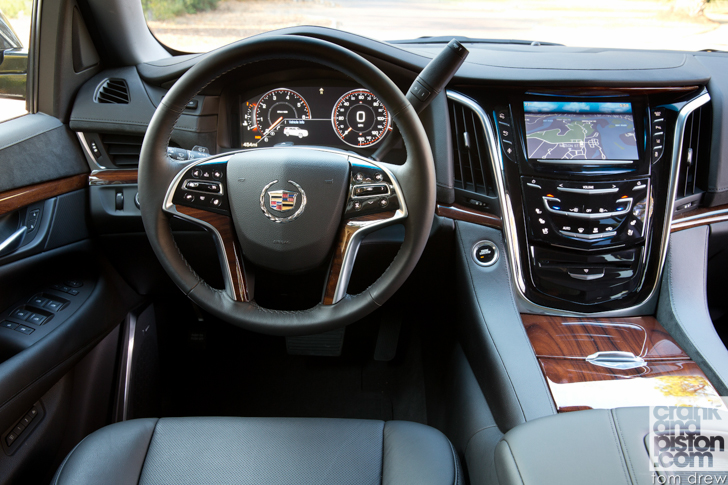 Despite its many benefits, it’s the size of the beast that I just can’t get my head around. Okay, for an SUV measuring just shy of 19-feet long (and thus longer than some buses), our long wheelbase ESV does handle the corners better than I had expected, Cadillac’s Magna-Ride suspension working well to keep bodyroll to a minimum. Switching from Tour to Sport suspension – the only sporty option on the Escalade save the six-speed gearbox’s manual override – also brings with it a tangible difference in balance through the seats without diminishing the ride comfort. And yet this is still a vehicle longer than some buses, and there’s no denying the bodyroll at pace. This isn’t really helped by the electronic steering, which proves very useful when manoeuvring at low speeds and through car parks but which doesn’t really give much feel for the front end: you do rather wonder whether the SUV is doing more of the work than required, though I suppose for a premium family cruiser, that stands to reason.

The Escalade’s width also proves difficult. On the highways, and after a bit of practice, the SUV legitimately feels no bigger than your average saloon albeit whilst travelling a few extra feet in the air. But given that our test route across Georgia also takes in smaller American towns and one or two narrow bridges en-route (all of which leave me nervously anticipating oncoming traffic), it does make me wonder what daily life would be like in the Escalade. Full of ‘right of way’ considerations probably… 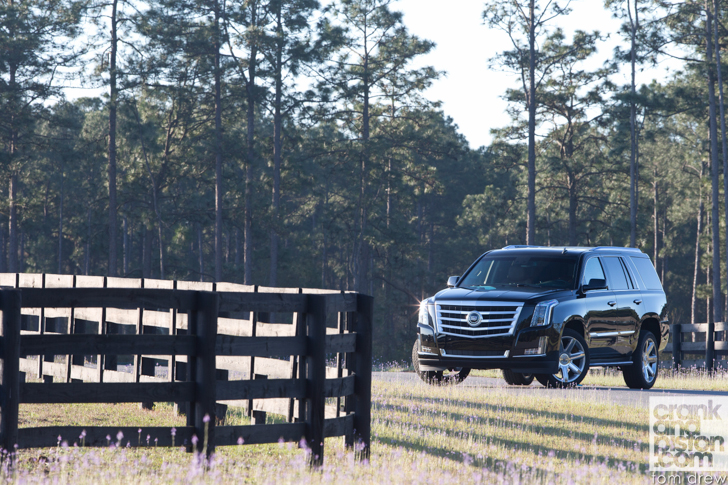 I realise this may sound unnecessarily negative towards the Escalade, but I don’t want this piece to come across as overly critical. In truth of fact, Cadillac’s newboy – stocked as it is with new technology, obscene amounts of space and comfort, formidable looks and an engine that could fit snuggly in sister Chevrolet’s Corvette C7 – there’s very little one could criticise. Even the price, with the base model rolling in at $82,200 ($10K less expensive than the Lexus LX570) and our premium ESV at $88,700, there is an impressive amount on offer for your pile of cash. Should you also be a family of eight eying a premium SUV that comes with its own DVD player and a remote control, then you would surely give the Escalade a long hard look.

I just wonder though what the Escalade offers that cannot be found in a luxury saloon bar. I just wonder if bigger is always better.