The Black Series has returned, with its latest and arguably greatest offering yet – the AMG GT Black Series 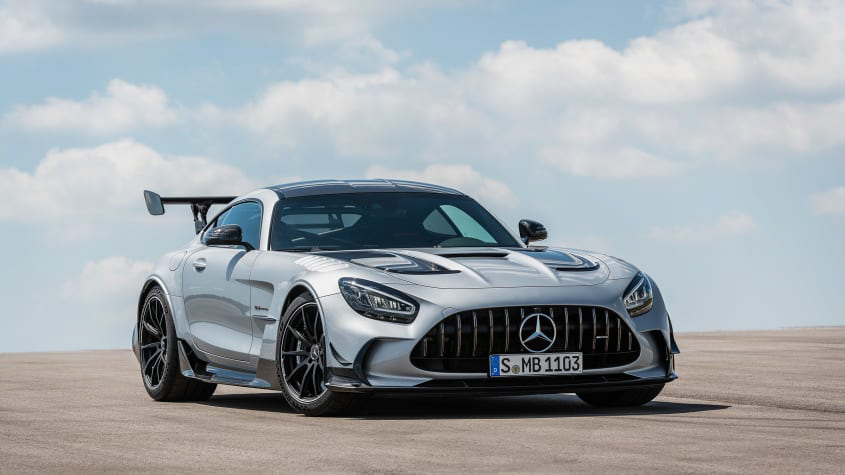 Mercedes-AMG has revealed full technical details about its new GT Black Series super sports car after it appeared in a film AMG posted last week. The AMG GT Black Series signals a return to the auspicious label after seven years, last appearing on the GT’s predecessor the SLS Black Series in 2013. The division has acted almost as a skunkworks set-up within AMG, creating models with the reputation of being extreme, uncompromising and hugely exciting. Based on the information released, the new GT Black Series should be no different.

First and foremost, the new GT Black Series signals a big departure for the brand by revealing a heavily updated version of AMG’s venerable dry-sump M178 twin-turbo V8 packing a huge 720bhp between 6700 and 6900rpm. This represents a 143bhp jump on the AMG GT R’s 577bhp, and 90bhp more than AMG’s GT63 S 4-Door, its most powerful model in the current range. Peak torque is also up over that of the GT R by 84lb ft at 590lb ft, which is available as a plateau between 2000 and 6000rpm.

Even more interesting than its outright figures is the technical make-up of the engine, which has changed enough for AMG to warrant giving the M178 a new LS2 designation (with no relation to a GM LS2, naturally). That’s because among other upgrades, the GT Black Series’s V8 engine features a flat-plane crank, a style of engine architecture usually reserved for highly strung V8 engines from Ferrari, McLaren, and more recently Ford in its GT350 Mustang.

What the flat-plane crank does is facilitate the firing order to create more balanced gas columns after the combustion process that increases performance, improves throttle response and allows the engine to rev more cleanly at high revolutions. AMG has also fitted a bespoke camshaft, intake and exhaust system, the last now moved to the internal sides of the V between the cylinder banks, where the two turbos are situated. The turbos themselves are also larger than those on the standard GT R, sharing the same anti-friction bearings as the GT63 S saloon and featuring larger compressor wheels that produce more power without compromising on throttle response. While these components have dramatically increased performance, they also fundamentally change the character of an engine, and in turn so too the character of the new GT Black Series itself.

The new engine’s power is sent exclusively to the rear wheels via an uprated version of the standard GT R’s transaxle seven-speed dual-clutch transmission through a carbonfibre torque tube. Quoted performance figures are rightfully on the more extreme side of things, with 100kph being hit in 3.2sec (0.4sec faster than the GT R), 200kph coming in ‘under nine seconds’, and topping out at 323kph – a figure that’s, without doubt, affected by the GT Black Series’ new aero package.

AMG has taken an equally aggressive stance on the chassis upgrades, with a substantial re-engineering of the suspension and body. Carbon is the material of choice, but as well as featuring extensively in the bodywork – the bonnet, bootlid, roof panel, front wings and aero devices are all manufactured from the stuff – AMG has also fitted a selection of carbon structural components including a shear panel under the engine and a newly designed adjustable strut brace situated over the front axle. The rear axle also has a strut brace fitted, this time of steel, which is also adjustable for stiffness.

The body itself is of the same aluminium space frame design as the standard GT, but features new forged double wishbone suspension arms, steering knuckles and wheel hubs front and rear that add stiffness while also reducing unsprung weight. Ceramic brakes are standard fit, so too adjustable coilover suspension with constantly variable adaptive dampers. AMG’s variable traction control system is also fitted, which is adjustable via a physical knob at the centre of the dash. The forged 19- and 20-inch staggered wheels are also new, and are wrapped in a bespoke compound of Michelin Cup 2 R rubber.

AMG has modelled the new GT Black Series’ design on its successful GT3 and GT4 racers. The massive new grille is not just for looks either, with the main intake now forming the full intake opening that feeds the outer two charge coolers as well as the engine’s main intake and cooling apertures. This leaves the outer openings to focus on cleaning the air over the front wheels and adding more airflow, and therefore downforce, onto the carbon splitter below. The front wings and lower skirts are also bespoke to the Black Series, but it’s the rear wing and diffuser combination that are the most assertive aero device, taking direct inspiration from the GT racers. The complicated triple-outlet exhaust system of the GT R has also been replaced with a more traditional system with outlets on the outer edges of the rear diffuser which allows the flat underfloor and rear diffuser to function most effectively.

In select markets (excluding the US, Canada and China) Mercedes-AMG will also offer an optional track pack which bundles a titanium tube roll-cage, four-point harnesses and a fire extinguisher. This package only subtly increases weight, and the roll-cage also acts as additional bracing for the structure.

Like Black Series models that have come before, all of this bespoke work doesn’t come cheap. With an expected price in the region of $415,000, the new GT Black Series will have some serious competition from the even more powerful Ferrari 812 Superfast, Lamborghini Aventador SVJ and McLaren 765LT, all of which are priced either around or below the Mercedes. AMG has not elaborated on the production run, but expect the number to be limited in a similar fashion to previous Black Series models. As the sign-off model for AMG’s outgoing boss Tobias Moers, the GT Black Series is quite the parting gift, and an apt representation of a brand that’s been totally transformed from its former self. It’s also a sign of exciting things to come at Moer’s new home as boss of Aston Martin.