A replica of the 1965 Formula 1 Mexican Grand Prix winning RA272 was the show stealer on Honda’s stand during the opening days of the 2013 Dubai Motor Show.

Flown across from Japan specifically for the Dubai Motor Show, the Formula 1 Grand Prix replica stole attention throughout the day away from Honda’s newly launched ninth-generation Civic, the new Accord Coupe – an example of which appeared on crankandpiston.com’s Management Fleet earlier in the year – and the 2014MY Jazz. Completing Honda’s current range on display in Dubai was the City saloon, Accord saloon, CR-V SUV, Pilot SUV, Crosstour estate, and 2014MY Odyssey. 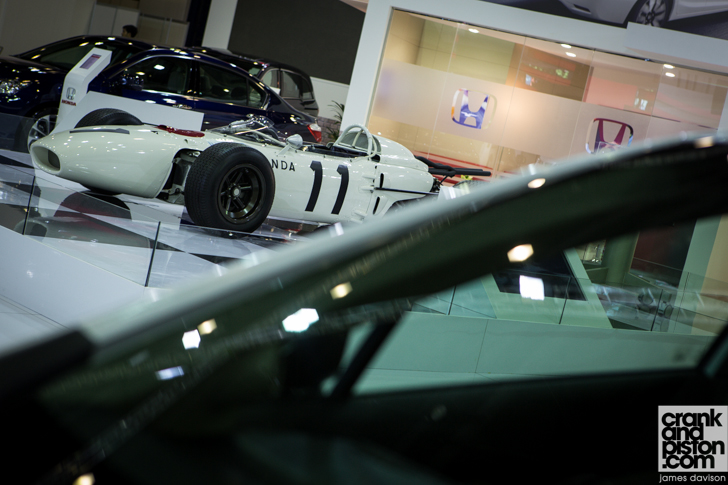 The Honda RA272 was the marque’s challenger throughout the 1965 Formula 1 season, replacing the RA271 that raced three times in Honda’s debut Grand Prix season a year earlier. Having scored just two points in the opening five Grand Prix – both at the hands of American Ritchie Ginther, a regular 24 Hours of Le Mans competitor between 1957 and 1966 – the RA272 stunned everybody by taking a lights to flag victory at the season closing Mexican Grand Prix ahead of season favourites Graham Hill (two-time world champion in ’62 and ’68), Bruce McLaren, Jackie Stewart, soon-to-be Porsche legend Richard Attwood, and eventual champion Jim Clark. It would prove the sole victory for both RA272 and Ginther, and the only victory for a non-British driver that year. 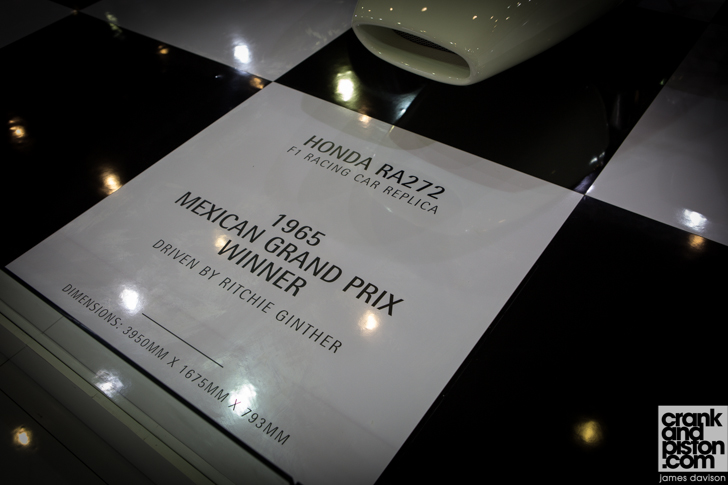 Honda would score only one more victory as a manufacturer (courtesy of John Surtees and the RA300 at the 1968 Italian Grand Prix) before pulling out of Grand Prix racing at the end of the 1968 F1 season. Though a brief F1 return from 2006-2008 yielded a single victory – Jenson Button’s first at the 2006 Hungarian Grand Prix – Honda nevertheless enjoyed immense success as an engine supplier to Williams, Lotus and McLaren between 1984 and 1992. In just nine full seasons, the combination secured five F1 Driver’s championships (Nelson Piquet ’86; Ayrton Senna ’88, ’90-’91; Alain Prost ‘89), six Constructors’ Championships (Williams ’86-’87; McLaren ’88-‘91), and 71 victories.