Just two hours remains of the 2013 24 Hours of Le Mans. Trying to track down knackered drivers is proving more difficult…

It turns out trying to track down sleep-deprived drivers and team personnel at 7, 8 or even 9am can be tricky (for those of you wondering where I’ve been for the last nine and a half hours). Speaking with the drivers required staking out spots in windswept garages or beside burly looking security guards outside each team’s motorhome, in the hope that a driver – hopefully not too shagged after his double or even triple stint – could spare a few words for crankandpiston.

As it turns out, as the hours continued to tick away and the fatigue started to set ever further in, the action on track did most of the talking anyway.

Audi’s stranglehold continued at the top of the timesheets, the polesitting #2 R18 e-tron of Loic Duval, Tom Kristensen and Allan McNish maintaining the one lap advantage they had garnered during a hectic night shift – ahead of the #8 Toyota TS030 of Anthony Davidson, Sebastien Buemi and Stephane Sarrazin. The sister #7 Toyota of Alexander Wurz, Nicholas Lapierre and Kazuki Nakajima fell one further lap behind as dawn began to break, and the ever-watchful eyes of Marc Gene, Lucas Di Grassi and Oliver Jarvis were bearing down on them. Incredibly, despite electrical problems putting them 12 laps behind the leaders, a furious charge from Andre Lotterer, Marcel Fassler and Benoit Treluyer brought the #1 back up into fifth place. A climb that had started almost twelve hours earlier from 21st.

Further back, the attrition indicative of endurance racing was starting to rear its ugly snout. Rebellion Racing, having monopolised fifth and sixth places early on, was in big trouble as the race neared the three-quarter mark. The #12 Lola of Nick Heidfeld, Neel Jani and Nicolas Prost fell foul to clutch issues which cost them 18 laps in repairs, while the #13 of Andrea Belicchi, Mathias Beche and Cong Fu Cheng clattered into the barriers at speed, ripping the front of the car off in one feel swoop. Interestingly, the Rebellion cars are still running nose to tail after lengthy repairs to each, albeit in 39th and 40th places some 50 laps in arrears.  The OAK Racing Morgans, with the #35 one lap ahead of its sister #24 entry, now looks set for LMP2 honours.

The #99 Aston Martin Racing Vantage GTE, leader of the Pro category, was the next giant to fall, Fred Makowiecki suffering a high-speed accident frighteningly similar to the tragic affair that cost Allan Simonsen his life one day earlier. A shaken Makowiecki was soon clear of the wreckage, and another safety car was called. Into the breach now stepped the #92 Porsche AG Team Manthey entry of Marc Lieb, Richard Lietz and Romain Dumas just ahead of the soul remaining Aston Martin Pro car of Darren Turner, Peter Dumbreck and Stefan Mucke. Porsche also heads the Am category, with the #76 IMSA Performance Matmut on point.

The Middle East crowd was having a similarly tough time. With the #28 Gulf Racing Middle East Lola having retired many hours earlier, several spins, a run in with the #51 AF Corse Ferrari 458 (which went for a wild/bucking ride through the gravel traps at one stage) and a broken headlight left the #66 Ferrari of Abdulazziz Turki Al Faisal, Khaled Al Qubaisi and their teammate Andrea Bertolini 38th. Still, JMW Motorsport were determined they could make the end.

As you can see, as the clock ticks further down, it’s getting increasingly tough. But don’t take my word for it. There’s a couple of ex-Formula 1 guys who’ve also found the going tough. 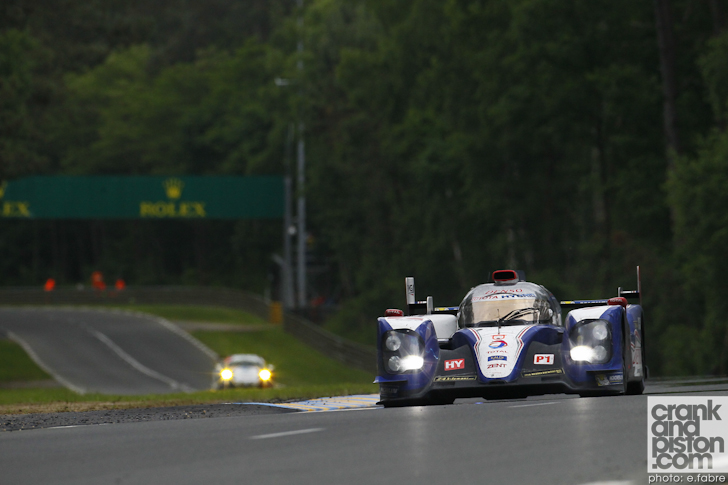 “Well we still have a long way to go in the race. As a team we are squeezing out the performance of our cars really well. On my car, #7, we had various issues with fuel pumps, other electrical problems which caused us to lose time to repair, and we had a puncture which meant an extra pitstop. So we’ve been a bit unlucky there. But that’s just Le Mans.

“It’s true, Nicholas made some good laptimes early on. In mixed conditions, our car – the #7 car – was quite fast, but in dry conditions we had too much understeer, so we are losing out again.

“Honestly, I’m surprised that we are still relatively close to Audi – well we’re not, but still – but that’s just Le Mans. The reliability is always surprising to me. But the race is not finished yet. Let’s hope the car stays in this position, and we don’t have any more problems, but there’s still a long way to go.” 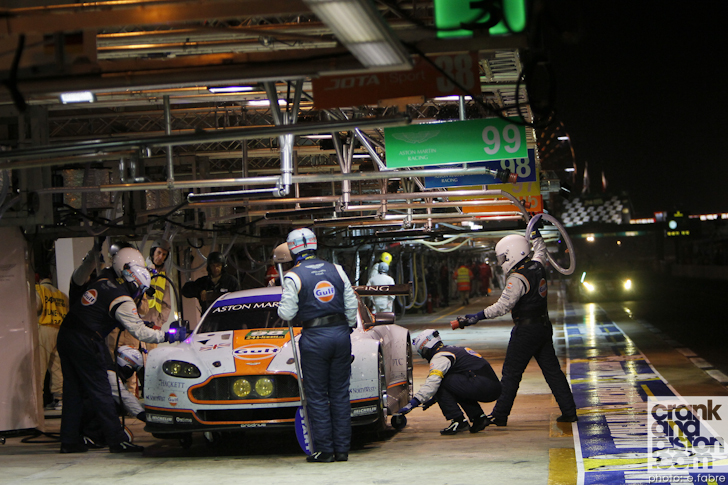 “We’ve been really consistent, and we were pushing really, really hard. The conditions initially were very difficult because it was half wet and half dry on the track. So we had to be careful and not to make mistakes but still I picked up a slow puncture, so we had to do a pit stop. That wasn’t the plan, but in the end the pit stop actually helped us: we were off-sync with the rest of the guys but we were then set for the rest of the race.

“The car has been very strong the whole year so far, and we’ve got some added weight to the car which adds to about a second per lap, so we really had to thin hard about setting the car up for Le Mans. For sure the Porsche is very quick, very consistent and very quick on the straights. When you’re behind them it’s almost impossible to overtake, so we were pushing them really hard and they were pushing us too.

“It’s very difficult though, because everytime you head on-track you think of Allan [Simonsen]. It’s very hard to believe. It’s the first time I’ve been in a race and something like this has happened, especially somebody so close. It’s really quite close. But his family insisted that we carry on racing. For him. We pushed hard. We really wanted this one.”