Even today, 44 years after it first appeared at the 1972 Paris Auto Show, the Carrera 2.7 RS is considered THE ultimate performance 911 and easily the most desirable Porsche to have ever rolled off Stuttgart’s conveyor belt.

So naturally, there are thousands upon thousands of replicas gracing the planet today, but this one. This is an original – a meticulously restored one at that – and one of only 200 ‘Lightweight’ examples first produced for the road for 1973. Unsurprisingly, it is gob-smackingly, eye-wateringly expensive at $1 million, but the ’73 Carrera 2.7 RS represents much more than just a chuffing great, wallet-shrivelling price tag. This, right here, is Genesis.

By 1972, the Porsche 917 had claimed 24 Hours of Le Mans victory twice on the trot en-route to annihilating its World Sports Car Championship rivals in 1970 and 1971, and a moderately successful Can-Am career lay just around the corner. New regulation changes though, which restricted engine sizes to 3-litres, meant the V12-powered 917 was forcibly shelved for 1973. For Porsche, a new goal emerged, one that involved creating not only a small series of new sub-3-litre racers for the FIA’s newly configured Group 5 Special Grand Touring class, but also a racer that would help its buying public identify more closely with its 911 range (that said racing 911 would help accrue the colossal expenditures of the 917 program wouldn’t hurt either). The answer lay in the new 911-based Carrera RS, but to guarantee Porsche’s Group 5 entry, a minimum of 500 street-legal examples would need to be produced within the year. Enter the Carrera RS, and even Porsche’s then-executives could not envisage the whirlwind it was about to unleash.

Underneath (mostly) lay the underpinnings of the 911 S, but little else remained of Porsche’s then most rapid road-going flagship. Fibreglass engine cover, and front and rear bumpers were added to reduce weight, the aluminium body itself also being stamped only 0.7mm thick compared with the industry standard 1mm. At the back, newly extended wheel arches were required to fit the 15in Fuchs alloys, now clad with 7in wide performance rubber. Unsurprisingly the drivetrain received a hefty tweak, with a brand new Type 915 five-speed manual gearbox replacing the dogleg Type 901 found in the 911 S. The 2.4-litre magnesium cased six-cylinder was enlarged, the new 2687cc air-cooled unit now using larger, 90mm aluminium barrels coated with Nickel-silicon carbide-based Nikasil for improved lubrication (hello nurse) and 917-derived cylinder wall-lining for more efficient power output. Bosch mechanical fuel injection and a higher compression meant power leapt from 170bhp in the 911 S to 200bhp in the 2.7 RS, 202lb ft of torque enough to guarantee a 5.5 second 0-100kph time and a 244kph top speed. Add a Ducktail spoiler after months of extensive wind tunnel testing for increased high-speed stability and, alongside the ‘Carrera’ decals down the flanks, a timeless look.

And this was ‘just’ the M472 Touring edition, our drive in which you can check out HERE. The second, more competition-orientated M471 Lightweight took ‘weight-saving’ to ever-more extreme lengths. Yet thinner gauge steel was used to produce the wings, roof panel and the doors, while thinner glass was sourced from Belgian production outfit Glaverbel. ‘Luxury’ took a similar dive, with the rear seats, sun visors, dashboard clock, glove box and inside door handles all being ditched, the latter replaced with plastic drop handles and pull chords for practicality. The only addition? A dashboard-mounted stopwatch, though this barely dented the Lightweight’s 975kg kerb weight (some 100kg down on the Touring). Bafflingly priced lower than the 2.4 911 S, the first 500 homologated 2.7 RS’ were sold quickly, the second fast-tracked run of 500 – comprised mostly of Touring models – doing likewise, and before Porsche knew it, up to 1580 examples had been sold. It would be another 18 years before a brand new Rennsport made production, as part of the 964 generation.

This particular model – nicknamed ‘Kermit’ given its Emerald Green paintwork with yellow detailing – first arrived in Italy in 1974, staying with its inaugural owner before being picked up by the President of the Porsche Owner’s Club of Spain in the late 1990s. Tracked to within an inch of its life – as per its original design – Kermit would eventually be returned to Base Motorsport in Germany in the early 2000s for an extensive rebuild of both the bodywork and drivetrain (power now up to a claimed 210bhp). Its’ Middle East odyssey would begin when the chairman of Tomini Classics discovered the model at the Essen Motor Show in 2013.

Ask Tomini themselves and they call the 2.7 ‘Rennsport’ “the granddaddy”. Apt, given that the original race-ready Carrera RSR would go on to dominate its category in the 1973 World Championship for Makes against even the mighty BMW CSL, including wins at the Daytona 24 Hours and on the Targa Florio. 42 years later at Amelia Island Concours, a road-going ‘73 M471 ‘Lightweight’ would sell at auction for a massive $1.4m. The price some are willing to pay for Genesis. Who could blame them…

You can check out more of our ‘What a Machine’ stories HERE, and more Porsche features HERE

Previous ArticleOPINION. Why the 911 is Porsche’s biggest mistake
Next Article INTERVIEW. UAE’s first ever winner of Infiniti Engineering Academy 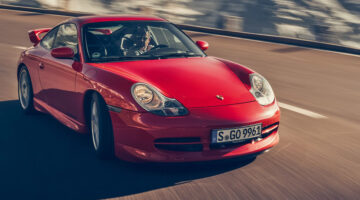