As the pony car wars reached their height in the late 1960s and early 1970s, the Ford Mustang reigned supreme. To many though, the Plymouth Barracuda left its own mark on history

One of the perks of life at crankandpiston.com is the access this brings to some of the automotive world’s more stunning – and often historic – machines. In the last few years for instance I’ve taken a monster truck for a spin in Abu Dhabi, driven a Ferrari at full(ish) lick around Fiorano, and even wangled a go in another privately-owned classic American muscle car (you may remember the ’79 Trans-Am we featured a couple of months ago). And yet despite all this, as I slide into the driver’s seat of this Plymouth Barracuda, I’ve got some serious butterflies.

For starters, since this particular model rolled off the production belt in 1970, it has had only three owners, each of whom were fastidious about maintenance. Save the re-dyed front seat, everything is of original spec and has been imported from America. On the day of our shoot, I’m even shown a white folder containing every receipt, service document and warranty slip it’s accumulated. It has racked up 259,000 kilometres – or from Dubai to its original home in Houston, Texas, around 20 times – without any major issue. Alongside its $52K(ish) market value today, almost $15,000 has been spent on import and restoration charges alone. One of only three generations of Barracuda produced between ‘64 and ‘74, it’s arguably one of the rarest pony cars currently in the Middle East. And if all that wasn’t enough, current owner – and all-round top bloke – Nader Elkhodary has promised the Barracuda to his daughter Salma when she’s old enough to drive. She’s three years old.

And today, I’ve been entrusted to take this meticulously kept future birthday present for a spin. Gulp. 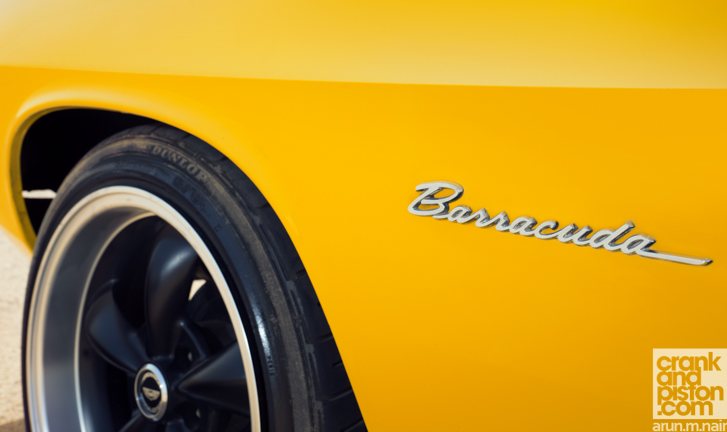 If that’s not enough, Nader – who I suspect is secretly enjoying my ever-heightening nerves – casually mentions that there are some power steering issues he hasn’t managed to get sorted yet, for which he apologises. To me, the ham-fisted oaf who’s about to take his beloved classic car for a drive. I get the feeling Nader and I are going to get on well today.

Truth be told, the third gen example you see above, though completely stock, is a far cry from the original Barracuda that arrived in 1964, a mere two weeks before its principal rival – the Ford Mustang – made its debut. Based on the already established Valiant compact saloon, the first generation Barracuda also featured the same engine line-up. Indeed, Plymouth’s insistence on marketing the Barracuda’s convenience and practicality over its sportiness saw the Mustang outsell its principal rival almost eightfold in the first year alone. Though slightly larger engine options were made available for 1965 (the 273cu in V8 now being upped to 235bhp), it would be another two years before Plymouth started taking ‘the pony car wars’ seriously. 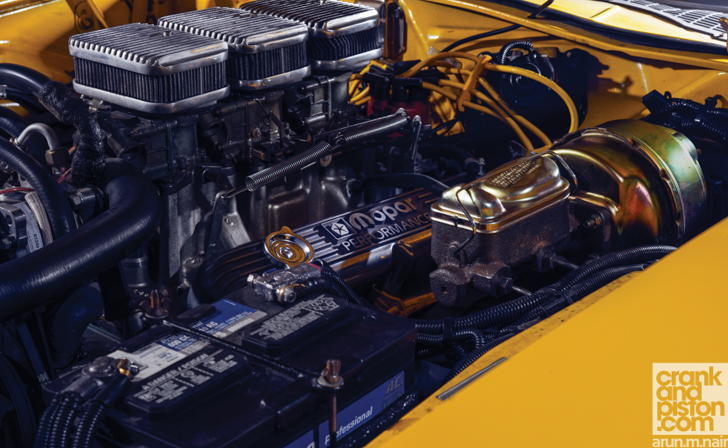 Still based on the compact Valiant’s platform (it would be another three years before the commonality between the two was ditched), the brand new second gen Barracuda was bigger, more aggressively designed and featured a more daring engine line-up to take on the newly launched Chevrolet Camaro and Pontiac Firebird. Ironically this simply sparked further problems. So hefty was the Barracuda’s new 383 cu in V8 for instance that squeezing a power steering pump into the diminutive engine bay was not physically possible, resulting in less-than-brilliant handling. To avoid direct comparisons with its sister Belvedere model, power was cut from 325bhp to 280bhp, much to the chagrin of potential customers. Leaving no room for air-conditioning didn’t exactly help much either. Still the redesign had struck a chord with American audiences, and though the Mustang still heavily outsold its competition, Barracuda production in 1967 rose by more than 50 per cent over the previous year. Now fully committed to producing a high-performance pony car, Plymouth went for broke in 1970 with a completely redesigned third generation. And finally
got it right.

Larger, lower, wider and more aggressively designed than ever, the ’70 model shared much – including a platform – with its recently debuted sister model, the all-new Dodge Challenger. Bigger than any of its predecessors, almost every engine on Plymouth’s line-up was made available for the third gen Barracuda. Indeed, so committed was Plymouth to the muscle car arms race that a ‘Cuda – the name confusingly given to the 335bhp V8-powered top-drawer equivalent to the Barracuda – even contested the prestigious Trans-Am Series in 1970, driven by no less a man than Dan Gurney. For the first time in six years, Plymouth had finally found a Barracuda that could compete on both a visual and performance level with the segment’s biggest contenders. Ironically, as customer interest in pony cars started dwindling, rejuvenated sales figures proved too little too late for the Barracuda, and just four years later in 1974, Plymouth’s pony car was no more. 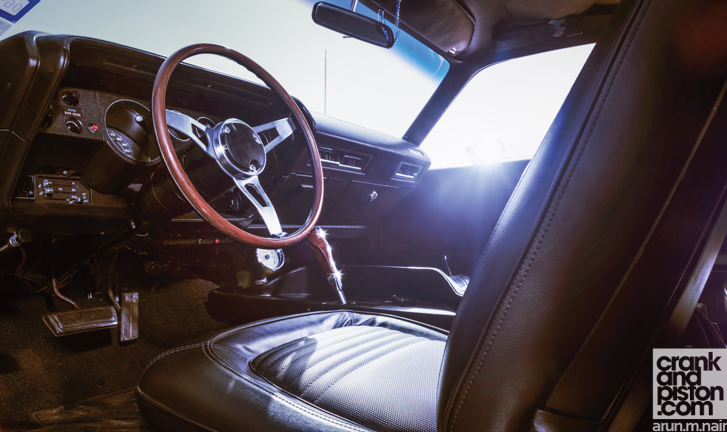 “Everyone goes for a classic Mustang or Challenger, but you just don’t see a Barracuda on the streets anymore,” Nader explains as we circle today’s test model. “Day-by-day it’s disappearing from the market. And that’s what interested me about the Barracuda. I wanted something different.”

Inadvertent parallels with Bumble Bee aside, I fast see Nader’s point as I deposit myself in the leather driving seat. Though my eyes are drawn to the retro collection of dials and switches on the dash – as well as the authentic Texas number plate sitting on the rear parcel shelf – directly in front of me is a magnificently slender and elegant rim blow wooden steering wheel. It’s beautiful to behold and almost impossibly delicate to the touch. And, unfortunately, solidly fixed in position. With barely an inch between the wood-grain and the top of my thighs. I attempt to remedy this rather awkward driving position by sliding my seat back as far as I can on the runners, only to discover that Nader has already done so. Even though our drive this afternoon isn’t particularly long or laborious, I’ll effectively have to drive bow-legged, taking care as I do so not to ride the brakes given the incredibly close proximity of the pedals.

To add yet further to my ever-raising blood pressure, Nader reminds me that if the engine should stall – “it does that when the AC is maxxed” – I should press the red button on the dash beneath the speedometer and keep the revs high. “Oh, but try not to go overboard as this can cause some problems with the carburetors.” Right…

*Our thanks to Nader Elkhodary and Select Nano UAE 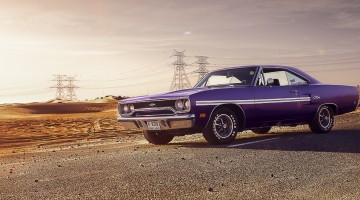