Between 1967 and 1971, McLaren dominated the short-lived Canadian-American Challenge Cup. And it all started with the 1966 McLaren M1B. We take a closer look with owner, and McLaren chief test driver, Chris Goodwin

Strange to think that, given the reputation it still holds today, the Canadian-American Challenge Cup existed for only nine seasons in its original guise, debuting in 1966 before a combination of economic recession, the worldwide oil crisis and spiralling costs led to its cancellation one round early in 1974. During this period though, none represented Can-Am’s ‘anything goes’ technical foundation more than McLaren. It’s cars proved the epitome of innovative creativity, the high-powered, lightweight ‘tangerines’ sealing 43 victories in only nine years, a five-year dominant run to the championship only brought to a close by Porsche’s all-conquering 917 in 1972. Quite simple, McLaren owned Can-Am.

Genesis was the M1A of 1965, the first Can-Am to feature the ‘McLaren’ name, and a jump from the Cooper-based, Oldsmobile-engined ‘Zerex Special’ team founder Bruce had raced independently in Group 7 sports cars since 1963. A simple design, the 1965 M1A was nevertheless effective, a combination of lightweight space frame chassis, Cooper wheels, independent suspension, and a four-speed Hewland Gearbox. At the heart was a 4.5-litre Traco Oldsmobile V8, and though reliably punchy, the Oldsmobile couldn’t quite match the more brutishly powered Lola T70s and Chaparral 2Es. It would soon be ousted for a 5.4-litre Chevrolet V8, admittedly 90kg heavier but delivering an added 100bhp to the Oldsmobile’s already impressive 340bhp.

Crucial tweaks to the bodywork and chassis were also made for 1966. A shorter, blunter nose and more tapered rear wing meant both better aerodynamics and downforce, while crucial tweaks were also made to the chassis by future F1 alumni Tyler Alexander and Robin Herd. The M1B, having dropped the M1A’s Kiwi-inspired black and silver in favour of an all-red racing livery, was also 20 per cent more structurally rigid than the M1A. The car’s potential was clear from the off, Bruce McLaren and teammate Chris Amon flanking eventual inaugural champion John Surtees in second and third place on the M1B’s Can-Am debut at Mont-Tremblant in Canada. Bruce McLaren Motor Racing would collect four more podiums from the six-round season, its namesake finishing the season third overall behind the more powerful Lolas of Surtees and Roger Penske Racing’s Mark Donohue. McLaren had arrived.

Lessons learnt were put to devastating effect by the M1B’s successors. Between 1967 and 1971, McLaren and Amon would alternate the driver’s title with both the new M6A and the M8, Peter Revson securing the team’s fifth in succession just one year after Bruce McLaren lost his life in a testing accident at Goodwood. Though the M1B would never secure Can-Am victory, Trojan-built customer examples would continue racing into 1969, securing four sports car wins and the Canadian Sports Car Championship. Following the collapse of Can-Am in 1974 – and its ill-fated rebirth between 1977 and 1987 – the M1B would not see race action again until new owner, and McLaren chief test driver, Chris Goodwin entered this very model in the Goodwood Revival, its legacy very much cemented:

“I thought it would be quite cool to do some historic car racing,” Chris explains to crankandpiston.com, “and the only McLaren that came to mind was the M1B, because that can race at the Goodwood Revival. I’ve won it a few times now and it’s one of the most competitive races I’ve ever done. The [M1B] is just a wonderful thing to own, but it’s even more wonderful to drive. It stands for a lot of what McLaren is.” 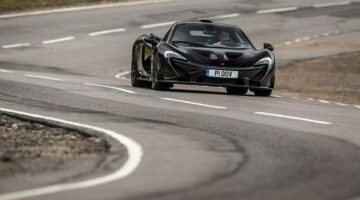