Long-time readers of crankandpiston.com will probably know that the Volkswagen Golf has enjoyed a lucrative period with our little publication. In its various iterations, the Golf has seen off competition from the BMW M135i and Mercedes-AMG A 45 among others. At select intervals, the standard Golf and the GTI models have spent time on The Management Fleet, and so impressed were we on a day-to-day basis that two members of the team actually went out and bought one. With their own money and everything.

Not that we’re trying to stack the deck then, but when Volkswagen Middle East generously offered us four months with the 2016MY Golf TSI S, we were confident Volkswagen’s headline hatchback would continue the model’s run of success. Even with less than 1000km on the clock.

Following a clean sheet design in 2012, the seventh gen design will be familiar to many readers: though perhaps not as striking as the more timeless Mk IV, the seventh gen nevertheless offers a bold look courtesy of the slick front grille, sharper-detailed headlights clusters, and ‘strong character line’ running down the flank. Look past these, plus those 16in alloys, and you’ll also find the same MQB modular chassis as used on the new Audi TT. 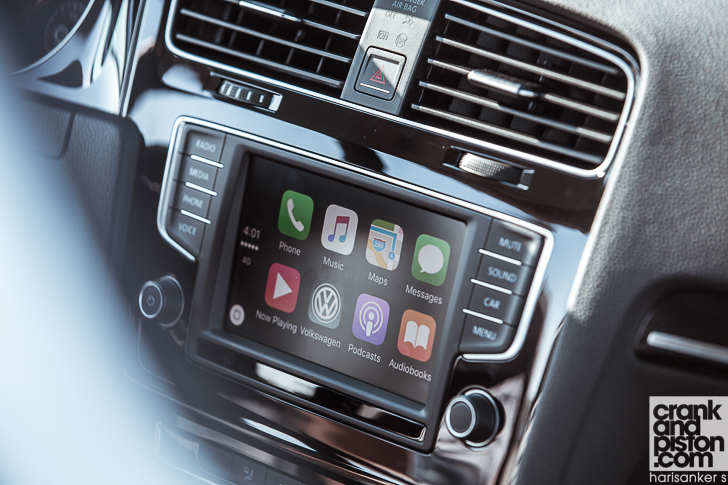 A similarly understated approach has been taken with the ‘large and mature cabin’, aside from that rather odd marketing description. Lane Departure Warning, Park Assist and a rear camera among other driver assistance technologies are reserved for the SE and SEL higher trim levels, though our S still boasts cruise control, an elegant and minimalist centre console design, and a super streamlined steering wheel. Oh, we’ve also nabbed a sunroof too.

Another notable feature is the ‘Blue-motion’ badge on the bootlid. Despite VW’s recent, ahem, issues with fuel efficiency (no sniggering, they’ve paid their dues), the company is still keen to push its already impressive fuel consumption ratings yet further. Blue-motion for instance offers low rolling resistance tyres to reduce friction from the road surface, energy recuperation under heavy braking, and aerodynamically optimised bodywork. The 1.4-litre four-cylinder meanwhile utilises turbochargers and pushes an ample 170bhp and 199lb ft, indicative of VW‘s ‘more power, less fuel’ philosophy. Added to this, apart from the seven-speed DSG automatic gearbox, is stop/start technology to preserve the contents of the 50-litre fuel tank. Remote start though has been given the elbow in our test model.

The other notable point on the cribsheet concerns the new MIB II touchscreen infotainment system, designed with Bluetooth and Apple connectivity in-tow, but also ‘smartphone integration’. We’ll either enjoy experimenting with all the functions on this new system, or end up ripping out most of our hair and rending our garments asking why VW made the change ‘since the old one was so good’. Find out which, and how the Golf’s tenure with crankandpiston.com continues next month.