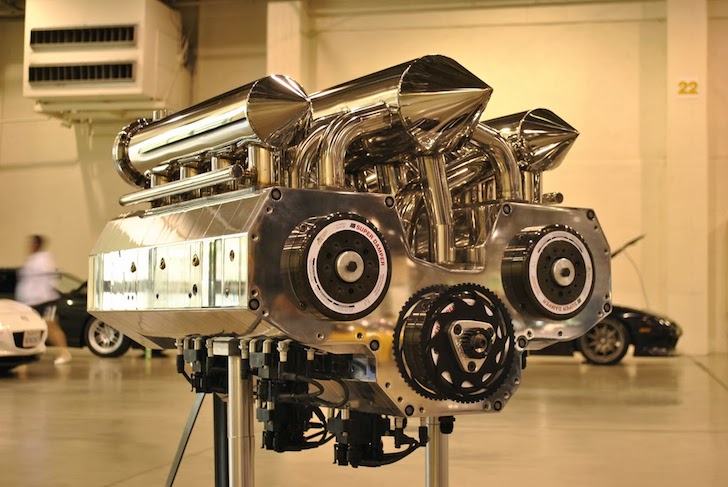 When PPRE dropped a six-rotor engine into a Mazda RX-4 we thought that was about as full rotard as you could get. Six rotary engines all lined up in a row was a Wankel wet dream and the idea that anyone could go beyond this rotardedness was unthinkable. Little did we know that record-holding power boat racer and engine developer, Tyson Garvin, had started working on a design almost five years ago to crown him King of the Mazdafarians.

Garvin had reached the performance limit of what a Chevy big-block could do and deduced that 12 rotors, four rows deep in banks of three, would neatly fill the same space. The solution is genius and the R12 only measures 76.2cm x 78.7cm x 60.9cm yet displaces a massive 15.7-litres!

Although ‘gentle testing’ of the engine has only just begun, the best run posted 815lb-ft of torque at just 3,200 rpm with a full bespoke EFI system needed for further runs as getting enough fuel and air into the 12R has been a challenge. The predicted final outcome would be 1,440hp on 87 octane right up to a drag racing version, turbocharged with 50lbs boost and running 116 octane, pushing 5400hp.

Everything has been built from scratch on the R12 by Garvin and his team except for the factory Mazda rotors (which still needed some modifications) and already he has been approached by a few supercar companies about possibly making a smaller unit for the street. However, as the R12 currently weighs in at 376kgs, it looks unlikely we will see it used in anything other than marine applications to begin with.

For more information check out 12rotor.com