You think Volvo, you think estate cars. It’s just an unwritten rule. Despite such a reputation, our man wonders if the new V90 is Volvo’s best example yet…

Is the new V90 the most elegant station wagon Volvo has ever produced?

It’s no secret that Sweden’s favourite carmaker – sorry Koenigsegg fans – has made huge steps regarding the design and technical development of its new models across all segments. It was no real surprise then, when Volvo launched its third addition to the ’90’ Series – alongside the XC90 and flagship S90 saloon – at last year’s Geneva Motor Show, it attracted a lot of attention with an altogether more stylish bodywork.

Tell us more about this new design then….

Okay, well, I am particularly captured by its lines. The V90 after all is a big car – it’s 4936mm long, 2019mm wide and stands 1475mm tall – but thanks to some superb work by the designers, the wagon looks agile, slick, very classy and, perhaps most importantly, modern. The back end has now lost its typical square tailgate, true, but that new inclined back window adds a lot of grace to the shape. I love it.

I’m also pleased to see that everyday usability has not been sacrificed in the name of beauty: the marketing guff emphasised both the new V90’s ‘style’ and ‘versatility’, after all. Much as it is in the S90 saloon, the interior design is minimalist, with a very clean centre console dominated by a large touchscreen ‘tablet’ for the infotainment system, and thus uncluttered by buttons. It’s gorgeous, being not only well-organized – everything I need is quite literally at my fingertips – but sober and elegant. There’s room for an army of passengers too: fold down the backseats and you have 1526 litres of load space. Interestingly, this falls short of both the BMW 5 Series Touring and Audi A6 Avant, but a much smaller $60K base price makes this forgivable.

That also shouldn’t come as much of a surprise. At the base of both the V90 and the S90 is Volvo’s new Scalable Product Architecture (SPA), a composition flexible enough to also be used on the smaller ‘60’ Series, but with a huge amount of focus on comfort too. Crucial for a Volvo station wagon.

On the move, the ride comfort feels completely uncompromised. The leather seats are perhaps a little firm, but they are so huge and envelope you so completely, that you could easily cane through a full tank without your legs going to sleep. Given the well-insulated cabin, that’s entirely possible too.

So, style and versatility, tick tick. And given that Volvo’s safety record is probably the best in the motoring world, the new V90 comes stuffed with driver assistance systems. Pilot Assist semi-autonomous drive technology is probably the most notable, which comes complete with large animal detection and run-off road mitigation. I didn’t particularly fancy driving towards a camel at 60kph to test this out, but at no point did I feel anything other than totally safe behind the wheel.

Bearing not only the above in mind but also the ‘comfortable cruising’ attitude that’s at the base of every Volvo station wagon since the Duett arrived 60 years ago, you’d be wise not to expect the most engaging of drives from the new V90. Not that I’d expected Caterham-like handling from a family car weighing in excess of 1920kg, but given the long wheelbase, you’re going to need patience under turn-in. The steering for instance is a little filtered for my taste – again, comfortable cruising – and the feedback, even for a station wagon, could be more direct. Still, it’s clear that the architecture has made a big difference to the stability: compared with other wagons I’ve driven – which generally have the rigidity of an overly soggy marshmallow – the V90 sticks with also religious determination mid-corner. It doesn’t feel nimble, but Volvo’s second largest model still feels impressively manoeuvrable.

And finally, the T6 engine, a new 2-litre four-cylinder boosted by a turbocharger and a compressor to produce 316bhp at 5,700rpm and 400Nm (295lb ft) of torque from 2,200 to 5,400rpm. More than sufficient, basically, to shift this two-ton wagon at a decent lick (6.1-seconds to 100kph is nothing to scoff at). The wide torque band and decent grunt means you could be forgiven for forgetting there’s only four-cylinders. But it certainly isn’t a sporty motor, Sweden’s finest having opted for smooth power delivery, as evidenced by the excellently silky eight-speed automatic transmission that sends power to all four wheels. Acceleration then feels punchy rather than overly energetic, pretty much exactly what you’d want with a Volvo station wagon.

The new Volvo V90 then, to this writer at least, remains a true, natural alternative to the likes of the BMW 5 Series Tourings, Audi A6 Avants and Mercedes E-Class Estates. The Swedish Style is unique, the manufacturing quality is a stupidly high standard, the reliability is a given, and safety, as always, remains a top priority. Sure, the handling is not the most thrilling – not that we’d expected it to be – but the comfort, the practicality, and the impeccable design make this more than enough reason to consider the new V90 among the best in its class. Also, the looks. They are truly gorgeous. Did I mention that?

You can find more Volvo stories HERE, and more of our Car Reviews HERE 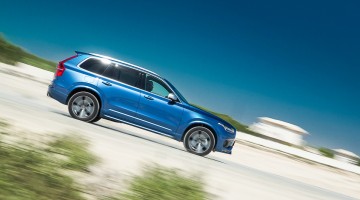 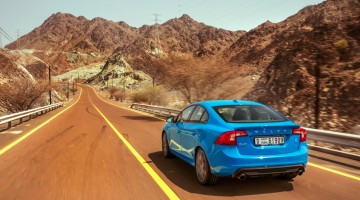