The Porsche 918 Spyder takes on the McLaren 650S Spider and the Koenigsegg Agera R in a three-way drag race. But who comes out on top? 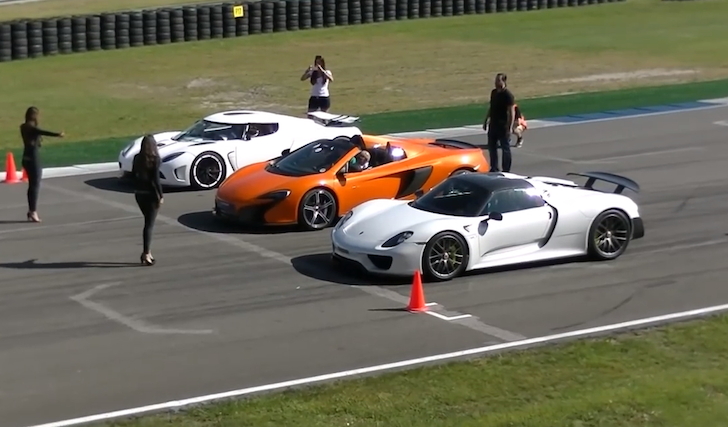 At the TT Circuit Assen in the Netherlands, we find a three-way drag race. But first, let’s introduce the contenders…

The first is the 890hp Porsche 918 Spyder, Stuttgart’s 345kph answer to Maranello’s LaFerrari and Woking’s McLaren P1. Sprightly minx it is too, the hybrid powerplant ensuring 0-100kph is demolished in 2.6 seconds.

Second is the 650hp McLaren 650S Spider. Though not quite as powerful as its bigger brother, it does share the same lightweight MonoCell chassis and the same 3.8-litre twin turbo V8, meaning a top speed of 329kph and a 0-100kph time of 2.9 seconds.

Finally we have Sweden’s entry courtesy of the 1140hp Koenigsegg Agera R (incidentally, the only model in this line-up that crankandpiston hasn’t driven). Like the Macca, the Agera R has been thrust into the shadows as of late thanks to the 1350hp One:1, which boasts a perfect power-to-weight ration, one-to-one (get it?). The Agera R though is hardly a minnow, clocking 2.8 seconds from standstill to the ton and boasting nearly 300hp over the 918.