This evening, after four consecutive Formula 1 World Championships, 39 victories, 45 pole positions, 24 fastest laps and 138 races in a branded car, Sebastian Vettel parts company with Red Bull for a new life with Ferrari in place of the departing Fernando Alonso. Speculation mounts as to how the German will fair without the tutelage of Red Bull owner Dietrich Mateschitz and team principal Christian Horner, and how he’ll find life with one Kimi Raikkonen in the other car.

Not that Vettel has had much time to consider any of this leading up to this weekend, in spite of the barrage of questions from the media and being disqualified from Abu Dhabi Grand Prix qualifying for an illegal front wing. He’s been on PR duty with current teammate (and imminent Red Bull team leader) Daniel Ricciardo. Whilst Vettel was busy putting the ‘11 championship winning RB7 through its donut-paces, Ricciardo was busy demonstrating Infiniti’s answer to the BMW M3 and sister company Nissan’s GT-R, the 560hp Q50 Eau Rouge. Fitting ahead of the Red Bull Car Park Drift season finale, the night air was alive with tyre smoke.

And no, before you ask, we didn’t pay too much attention to the front wing on the night… 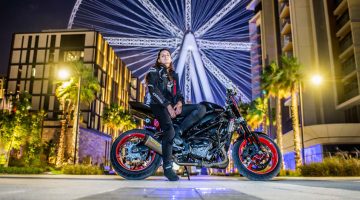