Fancied the new Ferrari 488 GTB but wanted more wind in your hair than open windows would allow? Then good news – the 488 Spider has now been officially revealed.

Equipped with a folding hard-top roof, the car proclaims to offer the same driving experience as the GTB, but with access to the skies from the driver’s seat.

Like the coupe, the 488 Spider is built on an aluminium spaceframe chassis and is powered by mid-mounted turbocharged 3.9-litre V8 with 660bhp and 560lb ft from 3000rpm. Attached to a seven-speed dual-clutch transmission, it means performance figures of 0-100kph in three seconds dead, and 0-200kph in 8.7 seconds. The top speed is 325kph.

The Spider has revised aerodynamics to balance downforce and drag with the air flow demands of a convertible. An electric glass rear screen can be adjusted to one of three positions when the top is down, depending on how much you want to hear the engine behind you. We suspect most people will opt for the position that allows “lots”. The hard top deploys and stows in 14 seconds.

This particular car, as revealed today. comes with a new Blu Corsa paint job. Our first chance to see the car in the metal will be at the Frankfurt Motor Show in September. 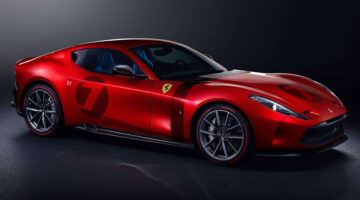 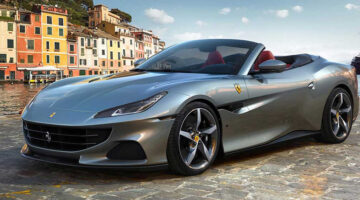