Thrust SSC. Andy Green. How to drive at supersonic speed 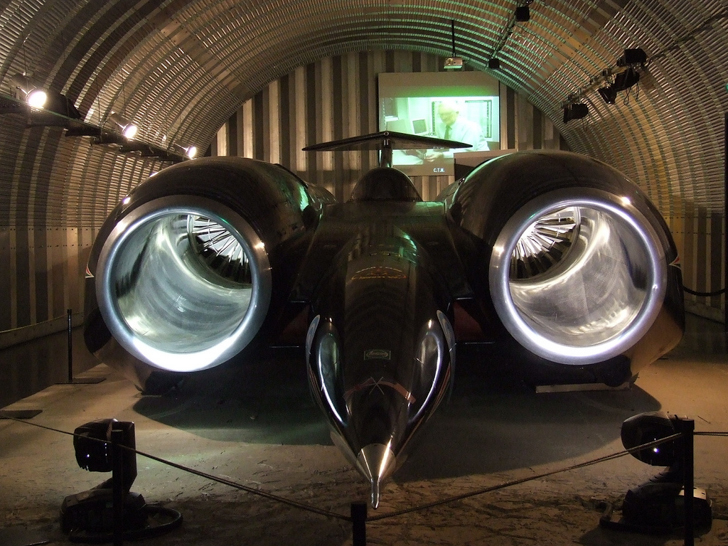 Let me describe the acceleration required from Thrust SCC during a supersonic run.

The preparation starts the day before, and there’s a huge amount of setup: working out exactly what rate we’re going to wind the engines up; what speed we’re going to accelerate to; what the setup of Thrust is going to be in terms of pitch angle; what that’s going to do to the handling, etc. It sounds like driving a car in a straight-line is easy, but have you ever thought about driving down the highway flat out and taking your hands off the steering wheel? There are crosswinds to consider and even the tiniest imperfections on what is essentially a natural lakebed mean driving in a straight line is critically dependent on the aerodynamic and dynamic suspension setup of the vehicle. So planning starts days and weeks beforehand.

The 24 hours before the run are spent only on preparation. By the following morning, the track has been prepped, cleared and checked. The car has been prepped and checked, and then checked again. The profile, in terms of acceleration and deceleration – that is, the parameters I’m marked against and am expected to meet – has been very carefully defined and signed by all the heads of department. Then I get into the car, start everything up, and check everything, like switching the hydraulics on and off to check the response of the accumulators. It’s not just to check the hydraulics have pressurised, it’s to check the accumulator seal between fluid and gas is there. We designed the car so I could check everything and I do this on every single run: to check the integrity of every single component. 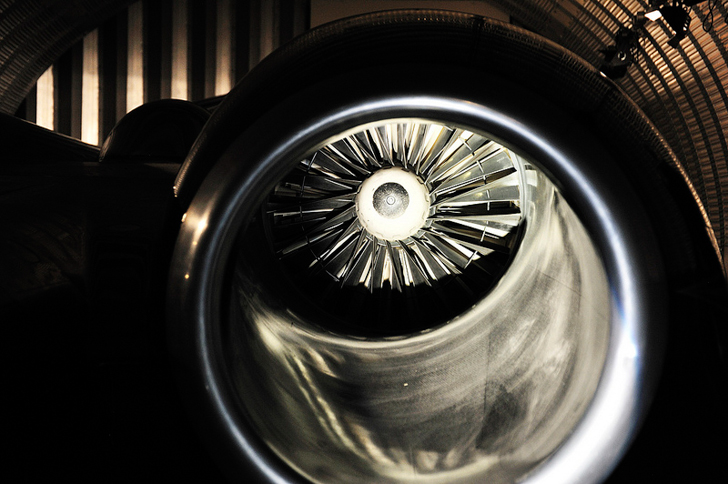 Having done all of that and got both jet engines started up, there’s 22km of clear track in front of me. I’ve got a ten-tonne vehicle with the equivalent of 1000bhp available under my right foot from two afterburning jet engines, but the initial acceleration has got to be very slow. The intakes are very close to the ground and what we don’t want is to suck huge lumps of desert into the engines. The Spey jet engines have come from the Phantom fighter jet – which I’d previously flown – and they have a reputation of being able to convert seagulls into extra thrust. So it’s a pretty robust engine, but lumps of desert? Not so much.

So it’s very gentle acceleration up to around 120kph. At this point you’re getting very clean airflow, so you can wind the jet engines up to full drive power and spin the turbines up to full speed. Soon you’re doing about 150kph, accelerating at about 15kph per second. Then I light up the afterburners, which pour neat fuel into the exhaust to effectively re-heat the exhaust, increase the temperature and increase the pressure of the gas so that it comes rushing out the back of the car much faster, giving much higher thrust. As that lights up the car is doing about 300kph and is accelerating at about 30/40kph per second. So from 300-1000kph is going to take about 16 seconds. 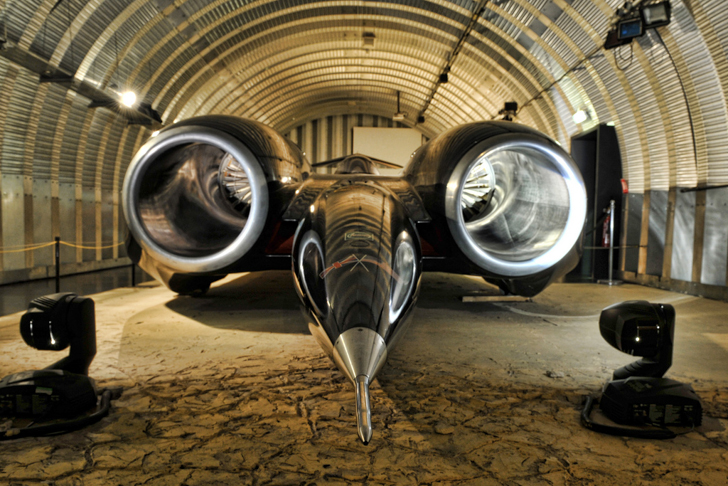 That bit’s relatively simple but can be very disorientating. Your inner ear is detecting that gravity is pinning you back into your seat harder than it’s pulling you down into it, so it feels like you’re lying on your back. It’s something we practice in jet fighters because the disorientation is so bad that people have crashed aeroplanes as a result of it. It’s still very distracting, especially when it lasts for 20 seconds.

Accelerating through 1000kph, the airflow is now going supersonic over the canopy so there’s a really loud shockwave noise from the carbon fibre canopy. The air is also going supersonic under the vehicle and between the rear wheels. On Thrust SSC we ran staggered asymmetric wheels, which we thought would be fine (15 years ago we couldn’t model anything else). It turned out it wasn’t fine and it actually caused some huge instability at the back of the car. At around 1000kph I’m fighting the car directionally. On the first of the supersonic record runs we did, I finished up 15m off-line with 90-degrees of steering lock on and the car still sliding sideways! 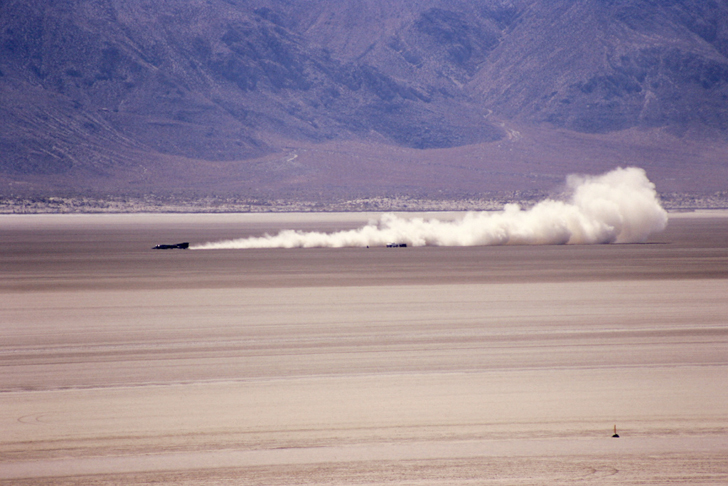 At these speeds the measured kilometre takes 2.9 seconds. At the end of the measured distance, I have to throttle back and let the engines idle as they cool down. At this point we’re slowing down at 35/40kph per second, so I’ve got warning lights going off. 15 litres of oil in each engine is now pinned to the front of the oil tanks: we’re slowing down faster than a jet aeroplane was designed to do. It’s fine for a few seconds but I need to check the lights go out again, otherwise I have to shut the engines down immediately. We’re still slowing down, and having been pinned back in my seat, I’m now thrown forwards into the straps. This is what is called the Somatogravic Illusion, and it’s again hugely disorientating. Racing drivers get used to it but they only experience it for one or two seconds. We’re experiencing it for 20/30 seconds of acceleration and another 20 seconds of deceleration. It makes you feel almost like you’re tumbling, going vertically upwards to vertically downwards. But you’ve got to ignore that, and focus on the car going straight, because the next phase is to make sure the speed is right to deploy the parachute. 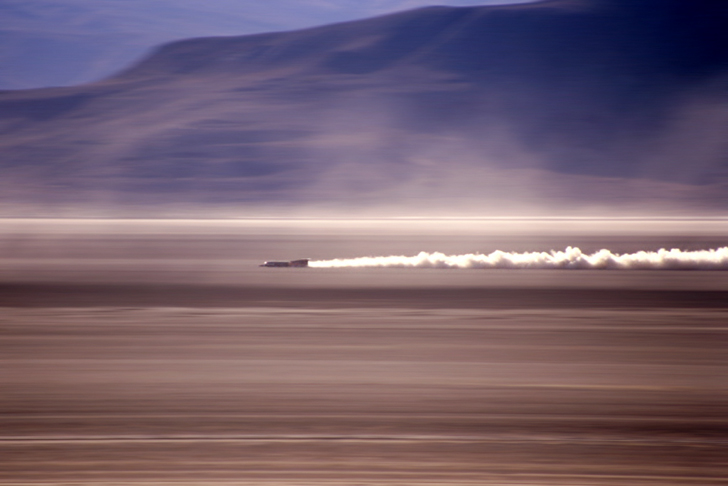 At 600mph (965kph), the chute will generate nine-tonnes of drag. At 650mph (1045kph) the parachute will just come clean off. If the shoot is deployed too late, the car doesn’t stop by the end of the track, so not only do we take the car off the end of the track, we don’t get the return run. You’ve got to do this run twice within one hour to get the official record. At about 300kph, we shut the engines down. They’ve now had a chance to cool down and we don’t want them sucking any debris up as the car slows down to a stop. And finally at about 200kph we start to ease the wheel brakes on – left foot-braking to all four corners of the car – to slow the car down enough so that we can stop right next to the turn round crew and save them the 20 minutes it would take to tow the car back if I overshoot.

That in a nutshell is a single run at supersonic speed. It’s a busy little process!