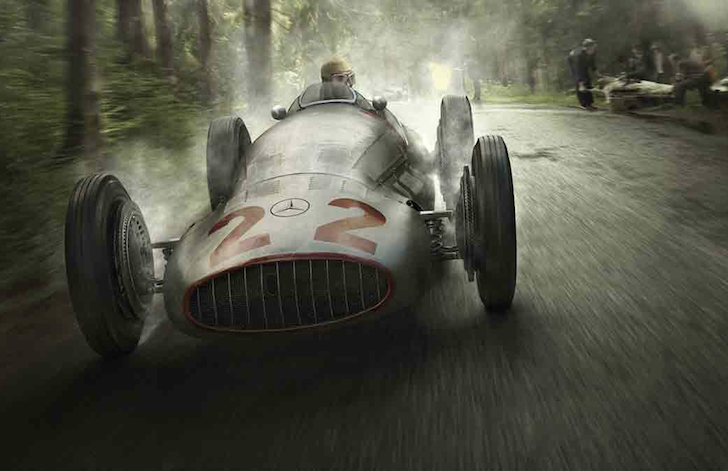 The legendary silver race cars of Mercedes-Benz and Auto Union have been brought back to life using a combination of original photography and advanced 3D rendering. The Silver Arrows Project set out to capture snapshots in history that could never have been achieved with photographic technology of the time.

Just hours before the German Grand Prix, the new Mercedes-Benz W25s, painted in national white, are one kilogram over the weight limit to qualify to race. Alfred Neubauer, the team manager, in a last minute stroke of genius, orders the paint stripped off. He solved the problem for the day, and created a silver icon for the ages.

Luigi Fagioli in his Mercedes W25 positions himself to take over Bernd Rosemeyer’s Auto Union car as they’re pelted by rocks on the Lasarte circuit of the Spanish Grand Prix. Mercedes rocked the rocky course by taking the top three finishes.

Rudolf Caracciola and Manfred von Brauchitsch close in on their teammate, Richard Seaman, as torrential rain falls on the track. Caracciola, once again, proved his right to the title “Rainmaster” by expertly slipping past Seaman on the 11th lap and going on to win the race.

Rudolf Caracciola victoriously crosses the finish line before a crowd of more than 250,000. This German Grand Prix was the last before the war and Caracciola’s final win.

Large scale prints are available in very limited quantities, 51×18? limited to just 80 prints, and 118X59? prints limited to just five. For more information, click HERE for the official Silver Arrows Project website. And if you would like to see how these images were produced then check out the video below.