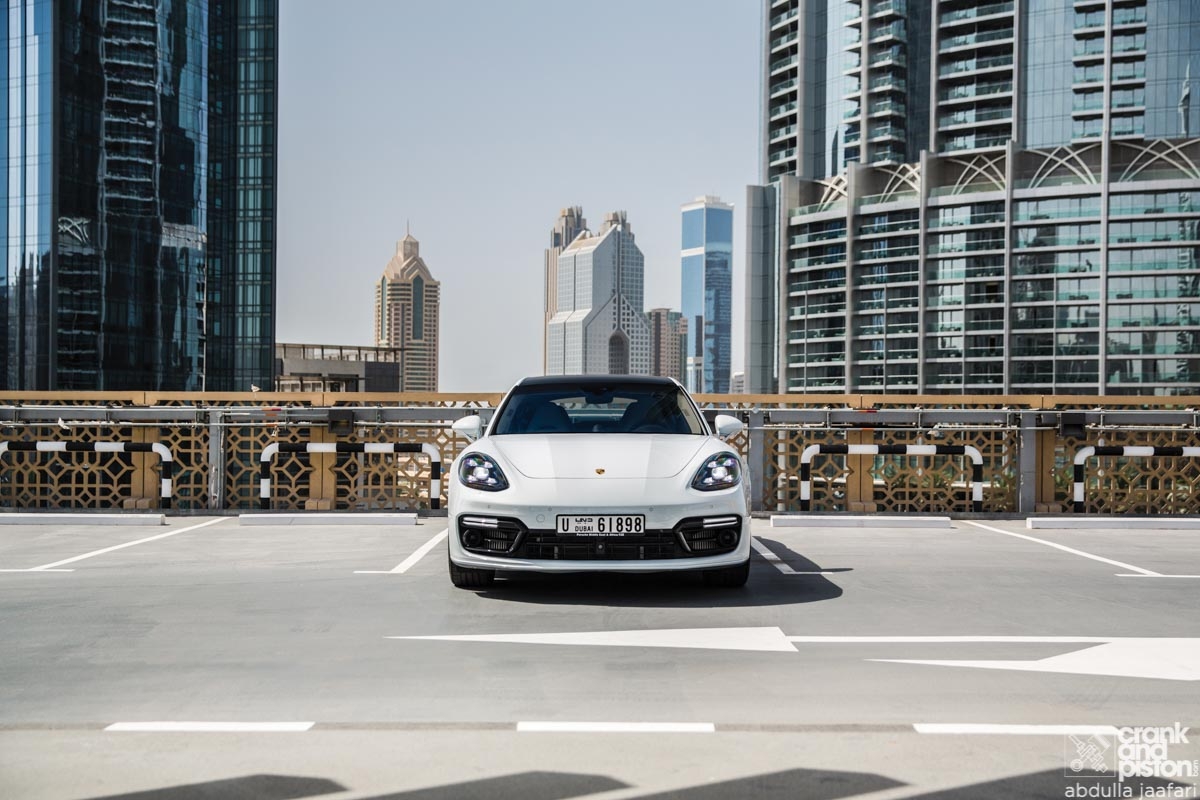 Right then, before we get started perhaps you will allow me to list all the things I really don’t like about the new Porsche Panamera S E-Hybrid. For starters, the luminescent green applied to the brake calipers and other details around the car really gets on my nerves – okay Porsche, we get it, the hybrids you make are ‘green’. Next.

Err, that’s it actually. And now that’s out of the way, let’s examine what makes this car so spectacularly good. Because, for me at least, it’s a massive turnaround to even be able to say that a Panamera is desirable at all. I’ve always felt ill at the sight of them – fabulous things to drive, I mean truly wonderful. But to look at, well they’ve always had me running for the nearest water closet. Not any longer. If only it had looked like this in the beginning but then Porsche does have previous form when it comes to ugly ducklings eventually morphing into swans.

The interior is a masterclass in business transport chic, covered in rich and sumptuous materials and designed with elegance as a top priority. It’s a beautiful and modern environment that’s been crafted with intelligence and forethought. It feels and looks expensive, which it should do because at $233,000 before options it really is.

Not that the recent cosmetic surgery doesn’t add to the appeal of lesser models but this one is the flagship – a destroyer of roads and savior of the planet. Well, sort of. It’s staggeringly complex, extremely expensive and monumentally fast – the kind of car that you would still be learning about months after taking delivery of one, which is kind of awkward when we have just three days to sample its delights, of which there are a great many. 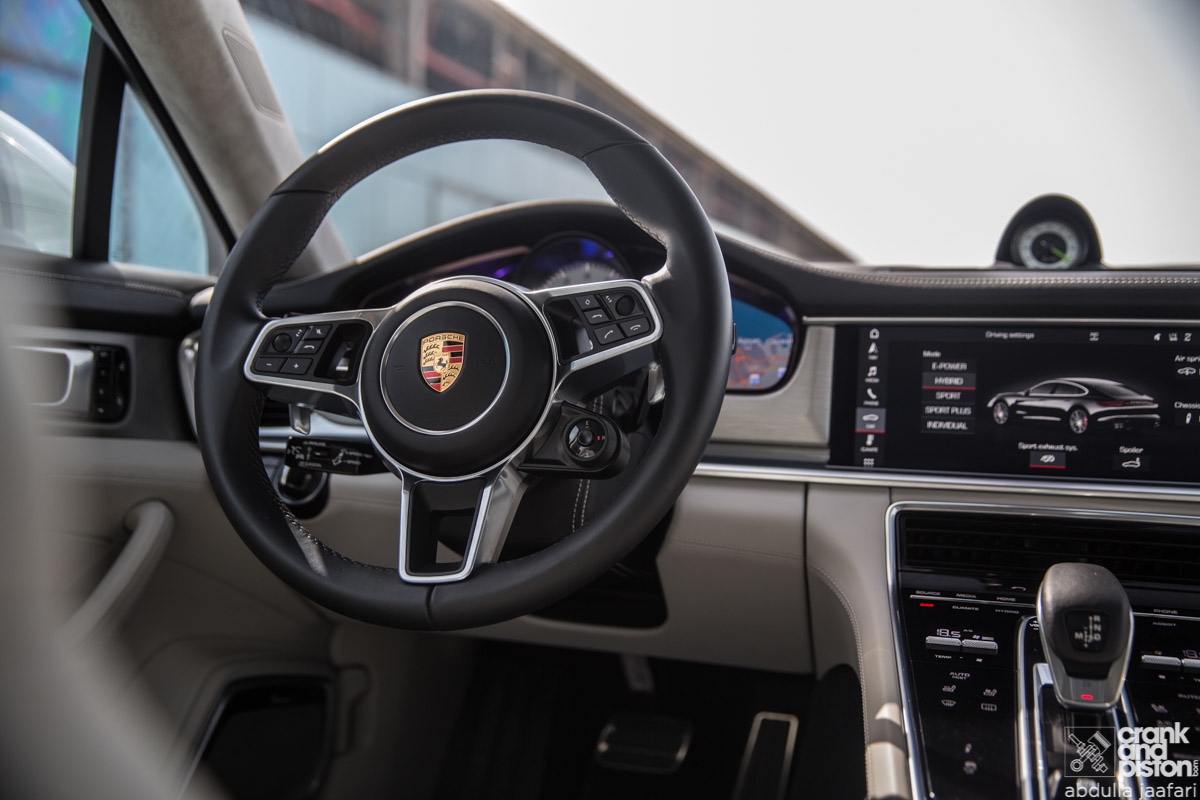 There’s no getting away from the fact that Porsche is pointing the immortal 911 to a hybrid future and its relentless pursuit of performance with a nod to lower and zero emissions is evidence that the company sees electrification as a pivotal part of future plans. And after even just a few minutes behind the plump wheel of this Panamera, you’ll agree that’s no bad thing. It’s nuts.

Under the lengthy bonnet is the same 4.0-litre, 542bhp, twin-turbo V8 that’s fitted to the Turbo S, which weighs a not insubstantial 315kg less than the hybrid. But that weight penalty is basically flattened with the addition of a 134bhp electric motor that endows it with a power-to-weight ratio of 294bhp/tonne. I’ll do the maths for you – this Porsche, which seats four adults, puts down 671bhp.

If you’ve ever had the privilege of experiencing a range-topping Tesla in full-on Ludicrous mode, that’s what this Porsche feels like when you open the taps. Instant, savage and slightly disconnected acceleration that you can’t help thinking should be a bit more exciting. But then again, this is a luxury limo not a track-biased GT2 wannabe. And Porsche really has thrown its entire repertoire at the SE Hybrid Panamera.

Adaptive dampers and anti-roll bars, an electronically controlled limited-slip differential, carbon-ceramic brakes, four-wheel steering – hardware that makes this hefty machine handle with confidence and complete control but the sheer weight of the thing gives it a slight numbness that, for once, is actually welcome. Because this is a CEO’s express, a road going Lear Jet that cushions its occupants and transports them at speeds that not long ago were the stuff of science fiction.

It will do up to 48km on silent electric power (or so Porsche claims) but less believable is the combined fuel economy figure of 2.9L / 100km and emissions of just 66g/km. To get anything like those numbers you’d need to drive the car like you’re terrified of doing more than 60kph and surely that’s missing the point entirely. This is a car that actively encourages its driver to tap into its vast reserves because that’s where the rewards are. 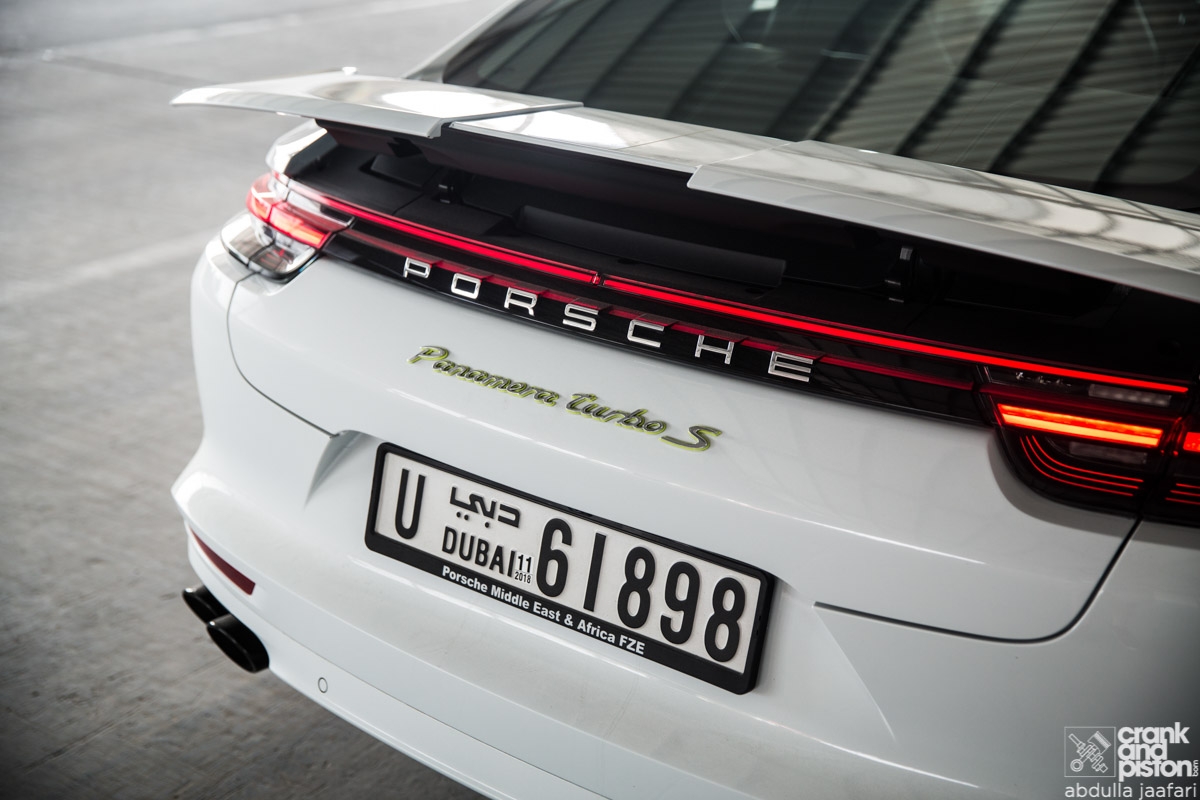 As a plug-in hybrid, you do need to keep the batteries topped up if you plan to drive on electricity alone the following day and there’s no shortage of driver information available to show the state of charge. So many screens, so much data, so many means for accessing it that waiting at the lights will never be the same again. It’s a technophile’s dream come true.

Over imperfect road surfaces the SE Hybrid rides like a hovercraft thanks to its physical mass ironing out everything, yet it never feels floaty or unwieldy. It’s still a sports car at the end of the day and, unlike certain other limos out there, it does like taking corners at indecent speeds. How you drive it will depend greatly on how you cope with its physical size more than anything, for it feels rather wide from the driver’s seat. But get it onto the open highway and it comes into its own with incredible levels
of competence.

That the performance envelope isn’t steamed open until the fossil fuel-burner kicks in is undeniable but would you really want a Panamera that’s been pared to the bone? Hardly. The power being chased by customers in new models such as this needs to be delivered and hybridisation is a way to make it all much more able to harness. It masks turbo lag incredibly effectively.

As you become more familiar with the car, it’s easier to navigate and plumb its depths by using the menu of various drive modes. And for full-fat deliciousness you’ll need to opt for Sport +, which by all accounts gives it the minerals for racetrack hi-jinx, too. The Panamera Turbo SE Hybrid is a car for blitzing entire continents in – a comfortable, planted and ballistic limo that feels utterly unstoppable. For sustained bouts of insanely high speed, there’s nothing quite like it available at any price.