According to the old adage, time flies when you’re having fun. It’s certainly been the case when referring to my time with the MP4-12C. I can’t believe it’s already been three months since the silver McLaren became the fastest member of our Management Fleet, which sadly means it’s time for it to go.

My time with the 12C has been nothing less than a revelation. While many sportscar manufacturers harp on about the everyday usability and practicality of their cars, I have yet to come across anything with anywhere near the McLaren’s breadth of ability. With the car in Normal mode it is as comfortable as the best luxury saloons on the market. While much has been said about the extraordinary magic carpet ride quality of the hydraulically interconnected adaptive dampers, a lesser known fact is that the McLaren possesses the best driving position of any car, regardless of category.

While the seat is slightly hard for my taste, everything else is ergonomically perfect. With the seat and wheel adjusted to your setting, things are exactly where you want them and the excellent visibility would make even a 911 feel claustrophobic in comparison. I also love the rocker switch paddle shift-system that allows you to shift both up and down using the same hand, leaving your other hand free if you need it. You can tell McLaren has put a lot of effort into getting these aspects of the car just right.

It wasn’t all peaches and cream during my time with the 12C though, and while the build quality is beyond reproach there were a few issues with the electrics and electronics of the car. On two separate occasions I experienced false warnings, one for a flat front left tyre and the other telling me I had an oil pressure problem. Thankfully both disappeared when I switched the car off and back on, but were nonetheless worrying. While those could be viewed as minor inconveniences, the fact that the IRIS touch-screen system – which controls all media and navigation – froze numerous times is more of an issue. This isn’t entirely surprising considering McLaren’s insistence on developing their own bespoke interface, especially when you look back at the troubled birth of the system, which was delayed due to a Japanese supplier being wiped out by the tsunami. This led to early cars arriving without IRIS and a feeling that McLaren continues to play catch up in perfecting the system.

Bizarrely the Bluetooth system in the car was also troublesome, which is a surprise as it’s never been an issue in previous McLarens that I’ve driven. In our test car the sound quality was poor, making it difficult to hear and be heard. I’m sure there is a fix for this, as past experience has shown the system works just fine. Another odd occurrence involved the A/C, which deals admirably with the Middle East heat and cools the cabin very well, but has the unusual habit of leaking cold air from the speaker on top of the dash when it is working hard. This leads to a foggy spot on the windshield where the air hits it. While not exactly catastrophic, it’s a nuisance nonetheless.

One area where the 12C didn’t miss a beat was mechanical reliability. I really did drive the McLaren every day and used it as much as possible in as many different scenarios. Whether struggling through rush hour traffic or being caned on the best driving roads it was always perfect. The double-clutch transmission is equally adept at dealing with a trip to the mall or the racetrack, and the turbocharged engine is amazingly tractable and savagely powerful all at the same time.

The sheer speed of the 12C is overwhelming and several thousand kilometres behind the wheel doesn’t diminish that one bit. It is a shockingly fast car that only the most exotic of hypercars can compete with on pure pace. As I found out last month it can also play the hooligan after finally figuring out how to switch off the electronics, although it is equally exhilarating to drive when the systems are working. For a car that was initially billed as lacking emotion, it has certainly managed to find a place in my heart.

As you have probably gathered, my extended time with the McLaren has left me with a deep hankering for adding one to my garage, although the hefty price of ownership is a hurdle during these financially challenging times. As the 12C has been on the market for a couple of years now, used examples are beginning to appear more frequently for sale. While not a route I would normally explore as the potential pitfalls could be financially ruinous, a used 12C is now an option as McLaren has just launched its pre-owned programme in the UAE, snappily titled McLaren Qualified. Any car sold through this new scheme receives a comprehensive bumper-to-bumper check, as well as being updated to the latest 2013 spec, which means more power. It also means that you get the peace of mind of a two-year factory warranty, which goes a long way to easing the fears that normally go along with purchasing a used supercar.

Something tells me that this won’t be the last time a 12C finds its way into my parking spot, but until it does this one will be very badly missed. 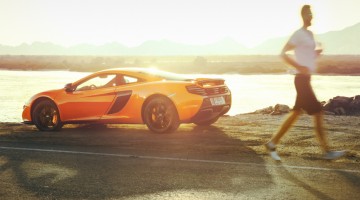