When a car enthusiast gifts his son the hottest Nissan GT-R from other side of the earth, he deserves an award.

We cannot display this galleryAhmad – who I met through Instagram – had just recently received his pre-built Rocket Bunny Pandem Nissan GT-R, which crossed a long way coming to Dubai all the way from Los Angeles, California. The car was built by LTMW garage and got pretty famous with its videos and photos all over the internet being one of the hottest Nissan GT-R’s around.

Being into Japanese cars, Ahmad also has a couple of Nissan Z’s (280ZX turbo and a 300ZX turbo), but for someone who’s into vintage cars, why get a GT-R? Well… he didn’t buy it for himself.

So imagine being a kid with passion for cars, you’re just about to finish high-school, and planning to leave for 4 or more years to study abroad away from your family. What could possibly get you to stay and go to a local university? The perfect bribe you can’t say no to. The GT-R.

To talk a bit about the car, it has an Alpha 7 performance upgrade by AMS performance fully built in the U.S, and under the bonnet you could see a Boost Logic intake manifold with a cool custom airbrush artwork. The interior is fully dressed with black Alcantara finishing at the headliner, center console and doors. Chassis reinforcement backseat roll cage with mounting points for the safety harness.

On the exterior, it has the Rocket Bunny Pandem overfenders kit including the ducktail spoiler, rear diffuser and front lip, sitting on matte black Rotiform wheels. Then thanks to the Air Lift air suspension system, that thing can almost grind on the ground. And no, he does not drive it lowered all the way down. That’d be stupid.

We cannot display this galleryThere has always been a debate on whether kitting such a car with overfenders, much wider wheels effects drivability, and add to that installing an air operated suspension system. It can surely pull some G’s in a straight line, but to me, I don’t think it could perform as good as a stock car around corners, but then, I never tried tracking an overfendered, widened, aired car. nonetheless, the car looks awesome on the road, and it is indeed the hottest GT-R I’ve ever seen.

Like this overfendered GT-R? Click here to see our coverage on a Liberty Walk Nissan GT-R built in Dubai a while back.

Previous ArticleOPINION. Is ‘ Turf Invasion ‘ in the motoring world a mistake?
Next Article TEASER. McLaren new ‘Hyper-GT’ coming in 2019 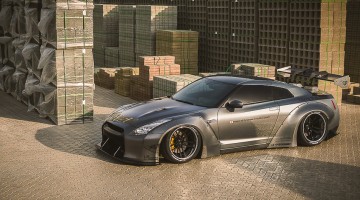