Speed Icons, a series from Joel Clark, offers the cream of motorsport’s most successful crop for just $500.

Before Historic Car Art came along, Joel Clark’s motoring enthusiasm was already developing nicely. Having learnt a trade at Silverstone (his local race circuit) by designing vinyl stickers for the local race teams, the Brit took this knowledge to art college, a move that would lead to a successful 15-year career with some of the world’s most successful ad agencies. Plus, the Speed Icons series you see here.

Available in three different sizes, each vinyl print costs up to $500, a snip at the price given the work that goes into each print. A mix of puzzle-like pieces – each individually cut out meticulously with a scalpel – each image is brought together over the course of up to 30 hours. 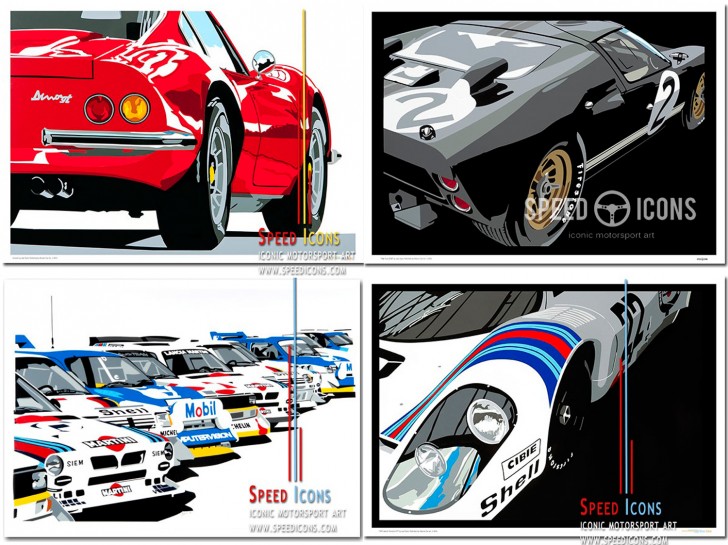 A devout petrolhead, as shown by his homages to both the Porsche Carrera 2.7RS and the Ferrari Dino 246 GT, Joel’s true passion is primarily motorsport. Amidst the icons on display, the 24 Hours of Le Mans gets his fair share of representation courtesy of the ’66 winning Ford GT40 (as driven by Chris Amon and Bruce McLaren) and the Porsche 917 in its iconic Gulf Racing colours. Even the Porsche 917K from 1971 – driven by Helmut Marko and Gijs van Lennep, and the second successive Le Mans winner from Porsche – takes pride of place.

The world of Formula 1 though is also represented, with three-time champion Sir Jackie Stewart front and centre in the Tyrrell 006 with which he took his final crown in 1973. Alongside the ’85 Lotus 97T in its famous John Player Special colours (a three-time winner with Elio de Angelis and that man Aryton Senna), Speed Icons also includes a vignette to James Hunt before his McLaren days. The Hesketh 308B he’s driving is the car in which the ‘77 champion took his first ever F1 victory at the ’75 Dutch Grand Prix.