Silver Car is a company based in Navarra, Spain, that produce small cars – requiring muchos cojones to steer – which are now available in the UAE. *cojones not supplied 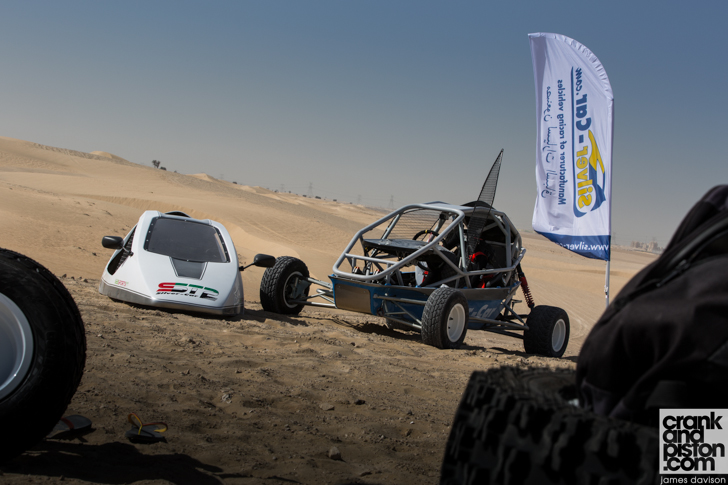 The Silver Car ST2 has the deceiving appearance of looking like a small recreational vehicle that you could have some fun with upon an afternoon. A chance meeting with Marc Planas Vallespir – Silver Car UAE representative – produced an invitation to do just that and, a few days later, I was in the desert with the Silver Car UAE team and being strapped in to the bucket seat of an ST2. 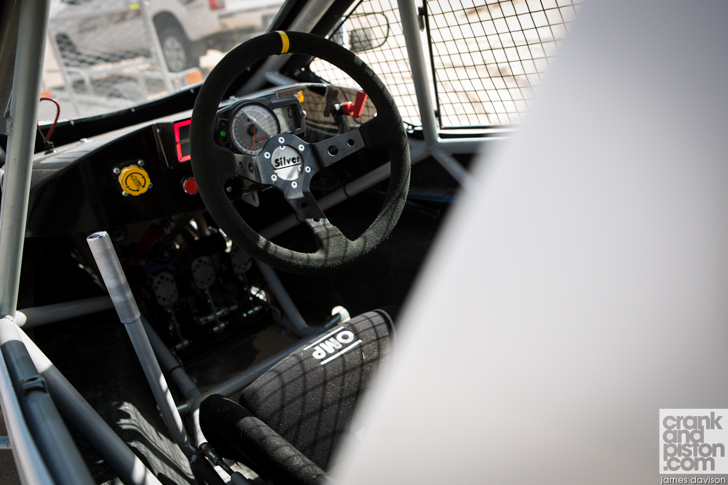 I had every intention of wanging this little Suzuki GSX-R600 engined, hoon machine across the desert and listened intently as Marc explained the operating procedure. Use the clutch on up and downshifts with the sequential ‘box. Forward for first then back for second, third, fourth, fifth and six just like a bike. Er, I have no bike experience but the principle seemed easy enough. With helmet and goggles on and the engine fired up I pointed the nose towards my desert playground, pushed forward to select first and sank the right shoe. And then things got a bit mental. 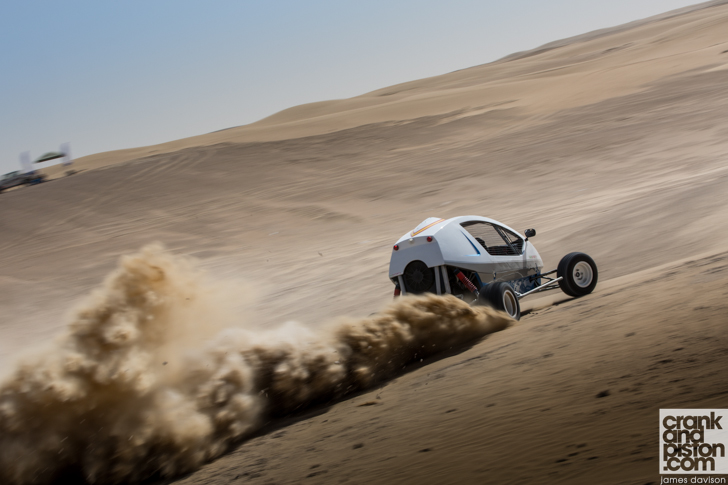 What Marc forgot to tell me is that the Silver Car ST2 puts out 120hp and will hit 100kph in three and a half seconds before topping out around 140kph depending on pilot weight and gear ratio. So, I have now been let loose on on a flatish piece of desert in something that accelerates as hard as a Ferrari 458. Except, it feels a lot faster, redlines at some astronomical rpm and weighs just 320kg meaning it skips over the desert at a horrendous rate of knots like a jet ski sucking on nitrous oxide while a banshee is screaming your ear. 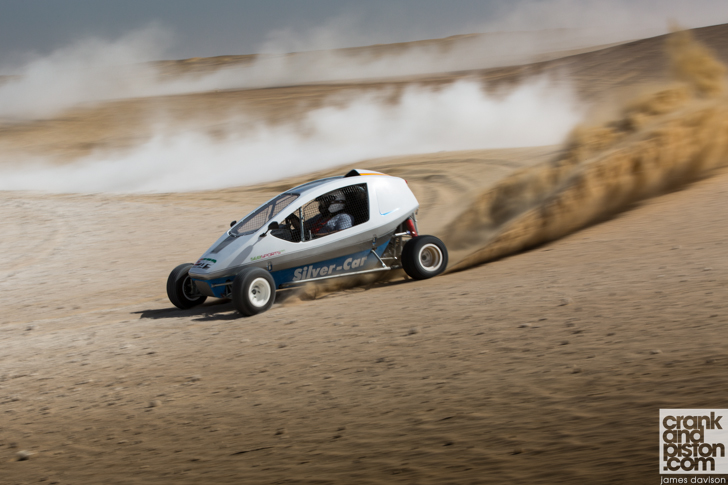 Time kinda loses meaning when you are behind the wheel of something so rabidly rapid. It may have been half an hour or it may have been ten minutes of me scaring the absolute pants off myself but, when I narrowly avoid launching myself off a medium-sized dune and into orbit, I call it a day and return to our base camp. And I am very aware of a few things. Firstly, this thing is stupidly unimaginably fast. Secondly, not once did I have the cojones to mash the accelerator flat to the floor and, on the few occasions I did knock it back into sixth gear, I completely chickened out from any pretense of approaching terminal velocity. 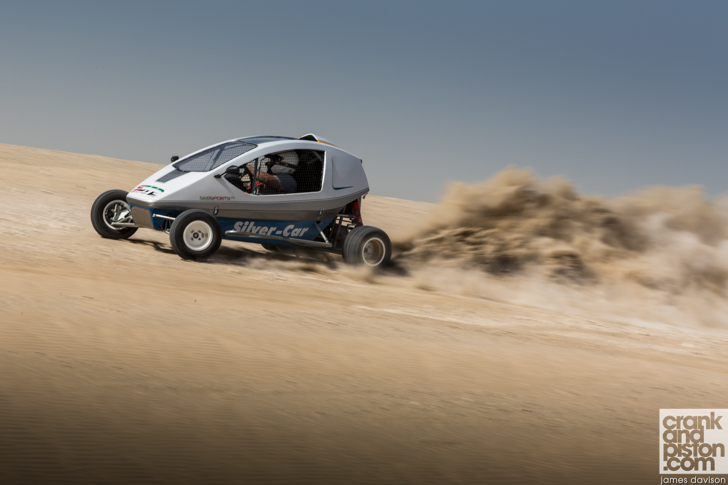 Marc simply smiles knowingly when I return. I can feel the adrenalin still pumping around my body and my hands are shaking a little. He points out that I barely got over 10,000rpm on my run which is just about getting into the fun zone. He does genuinely seem thankful though that I brought it back in one piece and apologises that it is on road setup and running road tyres. Wait, what?! 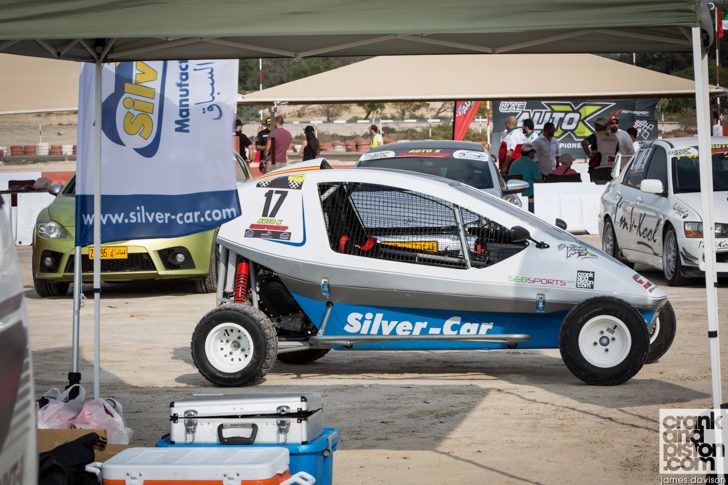 It turns out that Marc had entered round 1 of the UAE AutoX Championship in this very car and they wouldn’t have had time to change the setup and wheels. Instead, they let me rip around the desert with supreme confidence in the only Silver Car in the United Arab Emirates before giving it a quick clean, slapping some crankandpiston.com stickers on it and entering a competition. Not surprisingly, this little screamin’ demon tore up the tarmac at the Jebel Ali Kart track and, in Marc’s capable hands, took the top spot in the rear-wheel drive category. 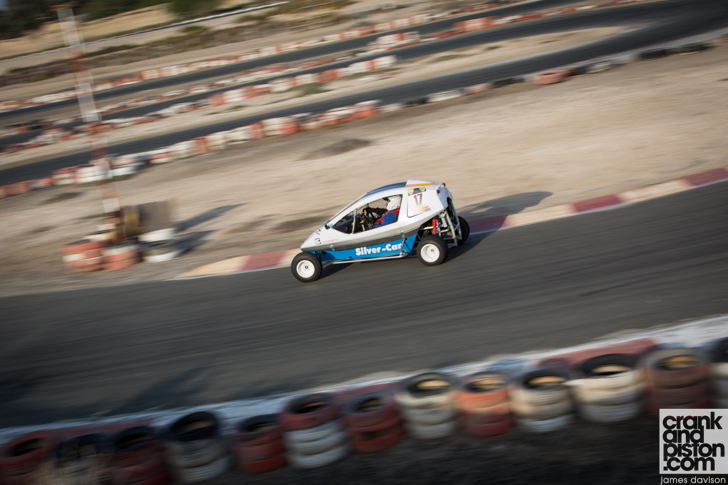 That, in any language, is called ‘Boss action’.

Sincere thanks to Silver-Car UAE