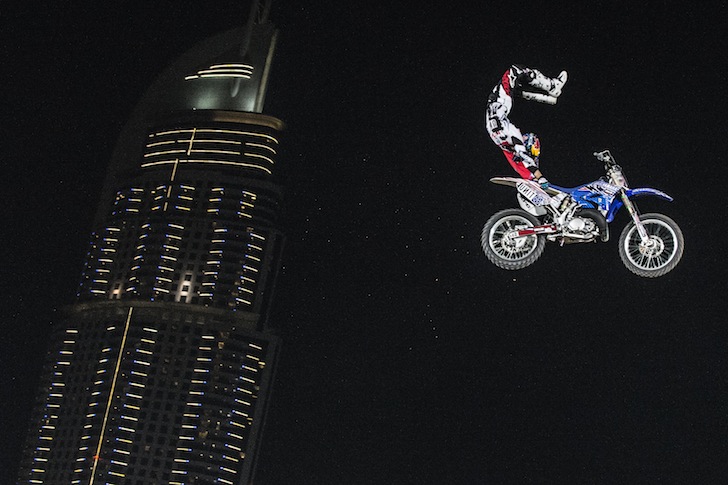 The Red Bull X-Fighters are back in town.

It’s the third time Red Bull’s finest extreme bikers will take to the sand and the jumps in the UAE. This year though fans and competitors alike depart from the traditional Jumeirah Beach Residence location towards Downtown Dubai and a new course constructed at Mohammed Bin Rashid Boulevard, a stone’s throw from the tallest building in the world; the Burj Khalifa.

In the video below, former Red Bull X-Fighters champion Ronnie Renner (about whom fellow Red Bull athlete and Dakar legend Marc Coma had a few nice words to say) walks fans through the new track layout, where France’s Thomas Pages took the top spot in this weekend’s qualifying session. His 85.8 points total only just surpassed the 85 points laid down by Spaniard Dany Torres in second, whom you may recall went for a few laps board his KTM 250 on the helipad of the Burj Al Arab at last year’s Dubai leg of the X-Fighter’s World Tour. Aussie Rob Adelberg and Kiwi Levi Sherwood – last year’s winner in Dubai – showed impressive form with 84.3 83.6 points-paying runs respectively, while David Rinaldo (FRA), Libor Podmol (CZE) and Mat Rebeaud (SUI) rounded out the top ten with 81.5, 81.4 and 80.5 points respectively.

Action at the second round of the Red Bull X-Fighters 2013 World Tour in Dubai kicks off tonight at 5.30pm, so be sure to check out Red Bull TV if you haven’t already got your tickets. The winners of our competition last year would certainly recommend it.