crankandpiston.com takes a spin in the Macan Turbo to find if the line between ‘sports car’ and ‘SUV’ have shifted in Porsche’s newest compact model.

The concept of ‘the SUV as a sportscar’ is hardly a new one for Porsche. When the Cayenne made its bow in 2002, it was bigger, heavier and more practical (urgh) than the 911 prodigal son, and purists of the brand wondered what madness hath befallen the good people of Stuttgart that they should bequeath the crest upon such a behemoth. Of course, as an everyday Porsche capable of transporting the family as well as being dynamic to drive, this didn’t stop sales figures rocketing and soon the Cayenne had overhauled the company’s established sports car line-up as its top seller. Words had been eaten and egg suitably applied to faces. It wasn’t long before a compact version was called for.

Said newboy arrived last year in the shape of the BMW X3/Audi Q5 bating Macan, and while many believed that Porsche’s new compact SUV would provide another box office smash, still there was scepticism: rather than ‘a sports car among SUVs’, would the new Macan be ‘just’ a small Cayenne? Far from it. As it turns out, the Porsche Macan Turbo is the sportiest SUV I’ve ever driven. 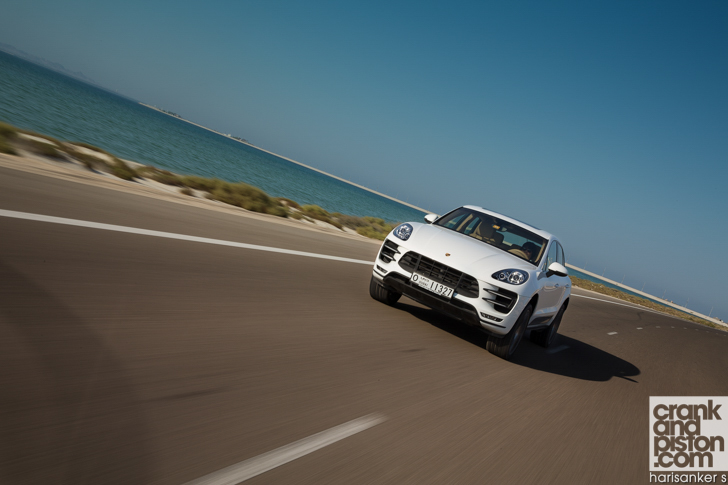 On the outside, that may seem difficult to swallow since the looks are decidedly Cayenne-esque, albeit with a hint of 911 about the headlights to rubberstamp that sporting DNA. And while the design still isn’t what you’d call handsome (sorry Porsche), the Macan bucks the trend by looking…well, good. The low, broad stance – coupled with a subtly sloping roofline – produces that characterful silhouette, while a minimalist rear boot lid, some niftily redesigned taillights and those optional 21-inch 911 Turbo Design wheels border on elegant.

The air-intake/front grille-heavy front end still looks a little awkward (the proportions don’t quite flow), but we can’t imagine it will be too many generations before Porsche gets this right. As the Macan itself proves, the design is moving in the right direction. 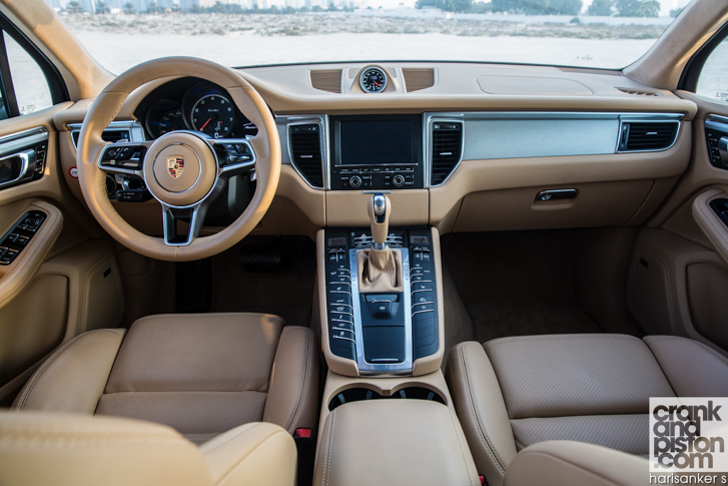 Furtive glances on the inside suggest there’s little difference between this cabin and that found in the Cayenne, features, fittings, beige upholstery and that button-fest centre console all very familiar. With, however, some notable tweaks. There’s a new multi-function steering, similar to that found in the 918 Spyder, again rubberstamping that DNA. And whereas the Cayenne boasts two handles on the transmission tunnel perfect for holding onto whilst cornering – and dislocating the occasional kneecap – in the Macan these have been removed altogether, the panelling now concaving around the transmission tunnel and allowing more legroom. Ironically, in a cabin both shorter and lower than the Cayenne, it feels less claustrophobic.

Standing 5.5ft tall means the ‘compact’ Macan is still a hefty brute, which inevitably affects the driving position: even with the 18-way Adaptive sports seats in their lowest setting, I feel like I’m towering above other motorists, the sensation much more SUV than sports car. Until I twist the archaic starter switch and fire the 400hp 3.6-litre biturbo V6 into life, and point its awkward nose at the nearest corner. 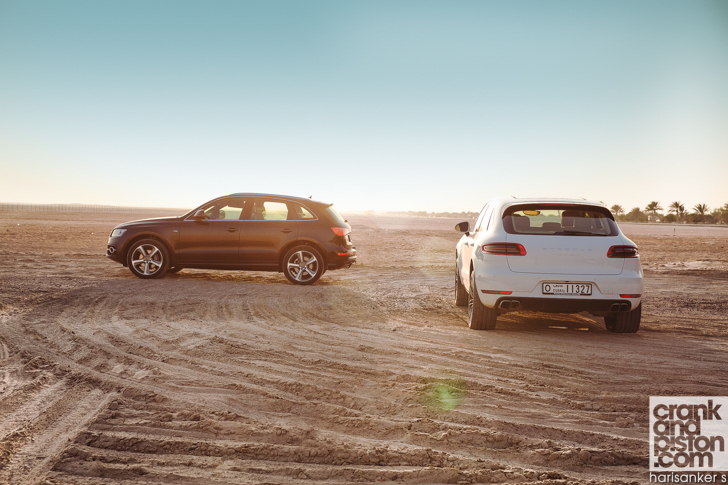 Peel back the Porsche bodywork and underneath you’ll find the underpinnings for sister company Audi’s Q5, though there’s been some serious changes to the chassis, the drivetrain, the brakes and the suspension, as well as a host of Porsche driver assistance technologies bolted on for good measure. Porsche’s Active Suspension Management for instance regulates damper force at both the front and rear axles for a more stable ride, whilst the all-wheel drive system lifted from the Carrera 4 systematically feeds torque to the front axle (the rear is always driven) to prevent slip under cornering. The result is imperceptible body roll and even fewer traces of understeer. Combined with fearsome amounts of grip from the front and rear Michelins, the balance is sublime. After tentatively pointing the nose of an SUV into the first few corners, suddenly I’m chucking a sports car around by its collar.

Once through the turns it’s time to unleash that twin-turbo-ed V6, acceleration from which is direct but not aggressively so: this is still a family-friendly SUV, sports car or no sports car. Power is sent through Porsche’s impossible to spell and pronounce seven-speed Doppelkupplung transmission, fast, smooth and consequently as excellent as ever. The real hit though is the electric power steering, which makes its first appearance on a Porsche SUV. To render all its good work moot with unnecessarily light steering would have been unforgiveable, but solid weight from lock-to-lock means the front end comes to the driver effortlessly. Only when putting those carbon ceramic brakes to the test do you feel the full weight of this 1925kg SUV rolling into your back, but the anchors are superbly responsive to keep that balance in check. It seems almost unnecessary to flick Sport Plus on our test model’s optional Sport Chrono package for ‘Race’-spec gear changes, since the composure and dynamism of the Macan Turbo is already much better than we thought possible on an SUV. Indeed, espite the big boot, comfortable ride and oodles of headroom, it hardly feels like an SUV at all.

And therein lies the issue. 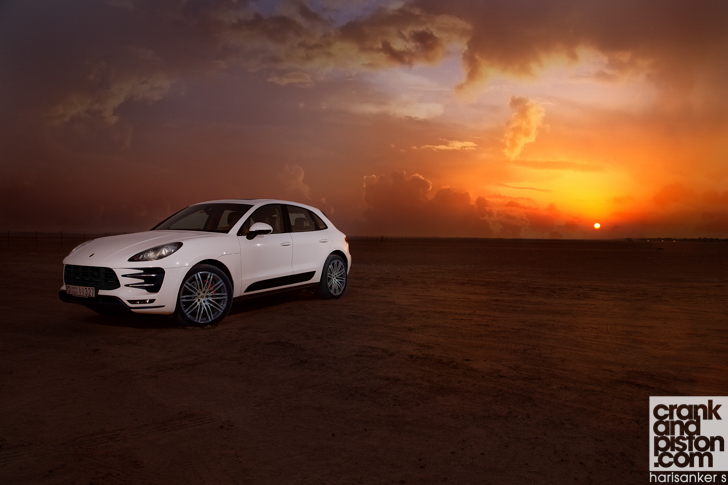 For customers with less-than-Cayenne-amounts in their bank accounts, the Macan is a logical choice. It offers four seats, admirable fuel efficiency, and day-to-day usability that its two-door, fuel-hungry, low roofed sports car brethren cannot. Moreover, the Macan Turbo offers the dynamic ride, handling and acceleration of which its compact SUV rivals and larger counterparts can only dream. It’s nimble yet aggressive, powerful, fun, and drives more like a sports car than an SUV. Which of course means that, after a few hours in the Turbo, I’m wishing I was in a 911, a Cayman or a Boxster for the true Porsche sports car experience. As good as the Macan Turbo is – and really is very good – cruel fate means that the more I drive it, the more I wish I was in another car. A sports car.

Not that this conclusion really matters. As the Cayenne demonstrated, the Macan will surely walk out of showrooms across the globe, and words will once again be eaten.