What’s the deal with the Porsche Boxster GTS and Cayman GTS? Are they any good? crankandpiston hits the road and track in Mallorca to find out…

As an automotive journalist it is easy to get complacent in writing review after review of fancy new cars and follow ‘The Template’. You know the score. Start with a brief introduction to the model, talk about exterior and interior aesthetics followed by the actual driving bit (where mentioning key words like ‘dynamics’ is critical) and then wrap up the package neatly with a conclusion that is normally a lengthy way of giving the car a five star rating by using more words than necessary to fill that final paragraph. So let’s not mince about and just get stuck into the meat and potatoes of the Porsche Boxster GTS and Cayman GTS. They both get a certified five stars.

This has surprised me as much as anyone for two simple reasons. Firstly, I appreciate giving a Porsche a good ragging as much as the next guy but I wouldn’t exactly classify myself as a Porschephile like our man McGovern. He sold his soul to the produce of Stuttgart many moons ago. Secondly, on paper both Cayman GTS and Boxster GTS are nothing more than S-spec models with some new cosmetic parts, already available optional extras and fancy gadgetry thrown in their general direction and badged-up as a GTS. Combined, that is hardly an Oscar-winning recipe for Best Porsche in a mid-engined role.

And yet, what both GTS models deliver is something quite special, albeit marketed in a typically down-played Teutonic fashion. Sure, Porsche is trying to link the new models as the spiritual successors to the GTS moniker by referencing the 904 Carrera GTS, but that is pure PR bumpf so we get all nostalgic and mention key phrases like “Porsche race car DNA imbued into every road-going model produced”. 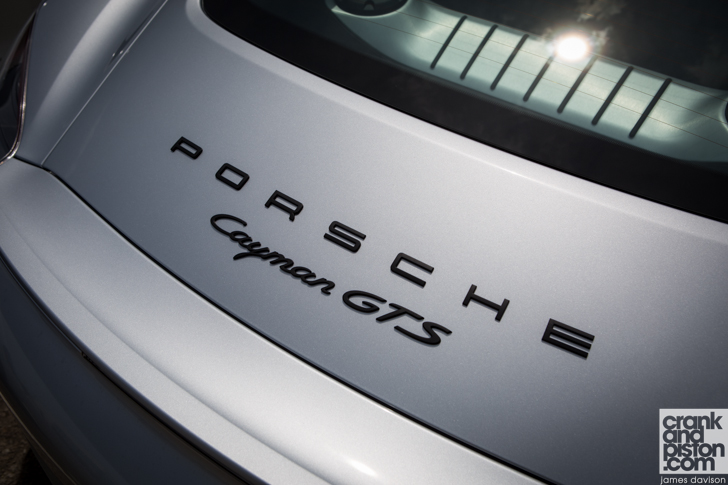 What we are really dealing with dates back to 2007 when the GTS suffix was reintroduced for sporty top-end models with “superior dynamic performance in their respective segments” that began with the Cayenne GTS and was later introduced to the 911 series as well as the Panamera. And how they add that “superior dynamic performance” is by throwing acronyms from the Porsche parts bin at already existing models. Which ain’t no bad thing.

At Porsche, GTS stands for Gran Turismo Sport so neither the Cayman GTS or Boxster GTS are stripped-down, lightweight racers. In fact, the addition of some pleasant alcantara trimmings to the steering wheel and seats adds some tactile creature comforts to the cabin. Them seats though, despite being comfortable, are a much sportier and lighter affair and I am glad I’ve the hips of a thoroughbred racing snake to fit between the side supports. Leave all the sports settings in normal and, as long as your aren’t personally carrying a wide load, both cars can be lived with on a daily basis without rupturing your spleen. That’s the GT in GTS element sorted then.

The S in GTS has required the addition of many more acronyms and we’ll start with PASM. The Porsche Active Suspension Management is an electronic damping control system which “actively and continuously adjusts the damping force on each wheel based on road conditions and driving style”. Both the Cayman and Boxster in GTS guise come with a 10mm drop and Sport Chrono package fitted as standard which stiffens the PASM chassis with a flick of the Sports Plus button. It also de-throttles the sports exhaust system which then cackles and barks into life with aural anger and perhaps a hint of #GoodToBeBad about it. Which may be coincidence. But probably not. 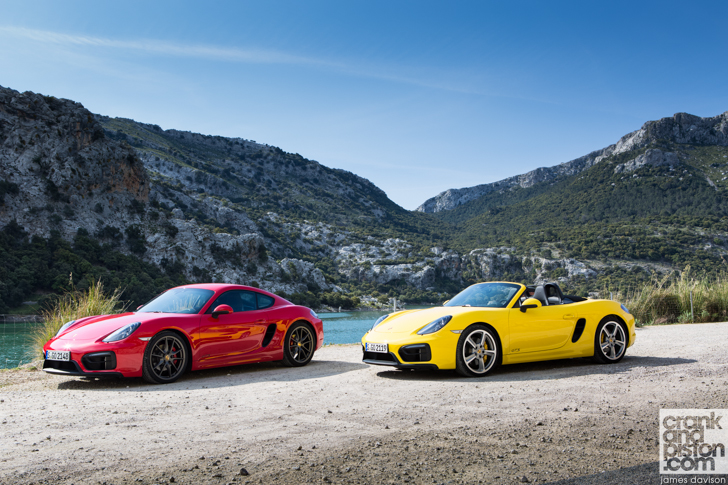 The package includes dynamic transmission mounts which alter stiffness and damping replicating race car rigid mounts during hard cornering and it is also worth mentioning the optional PTV (Porsche Torque Vectoring) which is a supplemental function of the PSM (Porsche Stability Management) system. In a Stuttgart nutshell, what PTV does is target brake intervention at the rear wheel located on the inside of the bend due to intelligent interaction of the rear differential lock. Clever stuff indeed but the result is so much more than a major mouthful of acronyms to chew over.

If you are all about playing the automotive top trumps game then neither of these GTS models is going to get you overly wet. The 3.4-litre flat sixes of the Boxster S and Cayman S have been given a bit of fine tuning and now deliver 15hp more in their respective GTS counterparts. This results in 330hp for the Boxster GTS and 340hp in the Cayman GTS which is hardly earth shattering stuff. However, combined with the above acronyms and a sprinkling of magic torque dust – to a value of 10Nm – what Porsche has created is something more than the sum of their parts.

Each of the GTS additions are, at the very most, a minor ‘plus one’ over the standard and already superb S models but the combined outcome is much more accessible and exploitable hoonage to be had by all. The perfect poise of these mid-ship runabouts encourages a confidence to lean on them hard and when the realm of traction has been bypassed you just keep it pointed, add a bit more right foot and slingshot yourself out of the slide. Even lifting (a little) when in oversteery situations will tuck the rear end back in which is normally a recipe for facing oncoming traffic in many a mid-engined machine. Therefore, stating that the Boxster GTS and Cayman GTS have a nicely balanced chassis is like saying the same thing about Jessica Alba. Obviously an understatement. 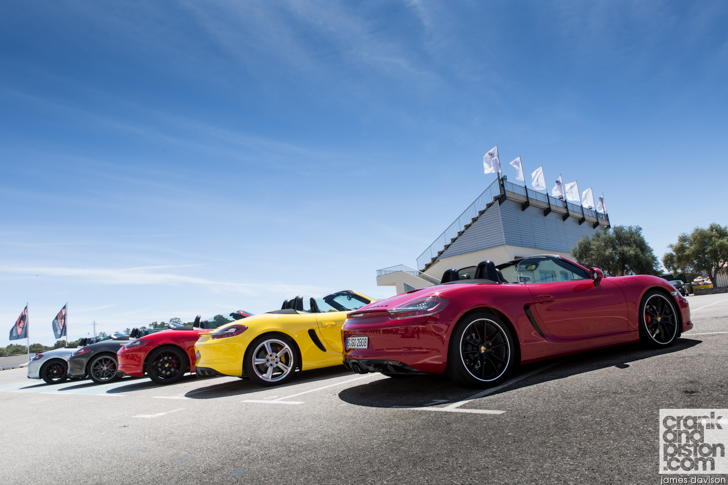 For those that get a stiffy over a stick you will be glad to hear that a manual option is offered on both GTS models. It is a seriously short shifter affair that slots home with that satisfying mechanical movement that you just don’t get when rowing at the limit with a paddle. It unfortunately isn’t all peachy news about having three pedals at your disposal though. In standard running you have to blip the accelerator manually on downshifts but I personally found the brake sits a bit higher than I would have liked for my club-footed attempts at heel and toe. Yeah, cue embarrassing search for second as hairpin rapidly approaches…

Hit the Sports Plus button and an automatic throttle blip function kicks in on downshifts which is problem solved, right? Well, no. It is fine on the track, but on the road opting for Sports Plus activation also stiffens the PASM chassis which is just too harsh for 99-percent of road conditions. Honestly (don’t shout at me) I would take the PDK over the manual and for more reasons than simply having a clubfoot. 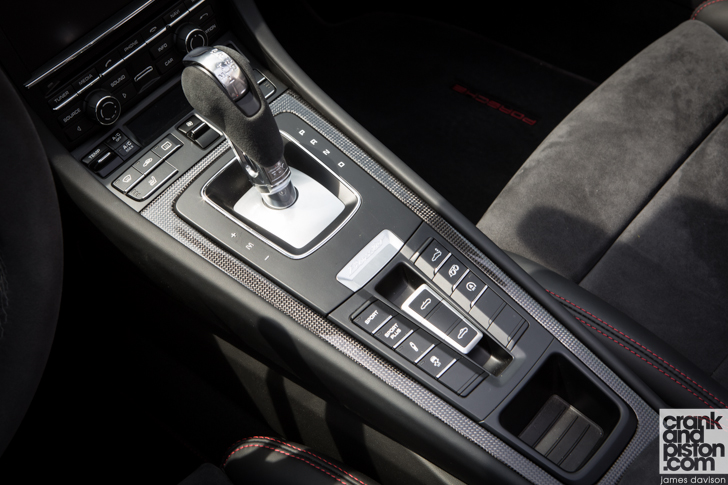 The PDK is noticeably faster on track to the level where a stopwatch isn’t even required. The shifts slot home in a millionth of the time it would take you to pronounce Porsche Doppelkupplungsgetriebe and you can enter a turn in a higher gear knowing that you can drop a cog mid corner while still being Master and Commander of proceedings. Manual is good and satisfying but Boxster GTS and Cayman GTS have been developed to work best with PDK. Yeah, I know. But move on bro or you’ll get depressed…

So what price do we have to pay for all this GTS goodness? Well, that’s the surprising thing. Porsche is not marketing these models as super exclusive, limited production items. The GTS variants simply slot in to their respective families as the current top model. As such, Porsche aren’t charging a premium and both Boxster GTS and Cayman GTS pricing is not only justified, but both could be seen as a bit of a bargain. 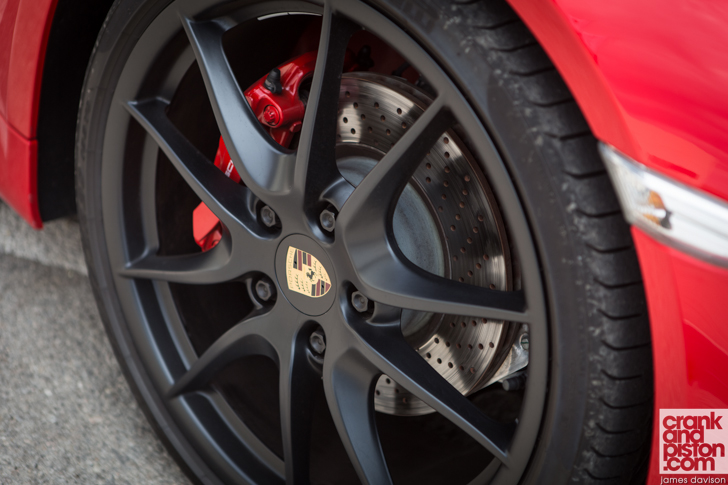 This is especially true if you compare buying an S model and speccing it up with some of the kit that comes as standard with the GTS. In the United Arab Emirates a Cayman S will run you AED 227,700 (US$ 62,000) while the Cayman GTS sets you back AED 258,400 (US$ 70,351). Most of that difference would easily be swallowed up with optioning the 20” wheels and a few GTS acronyms. And trust me, you will enjoy those acronyms.