One of the most spectacular supercars from the 1980s might have looked like a Porsche 911, but the 959 was an altogether more exotic machine 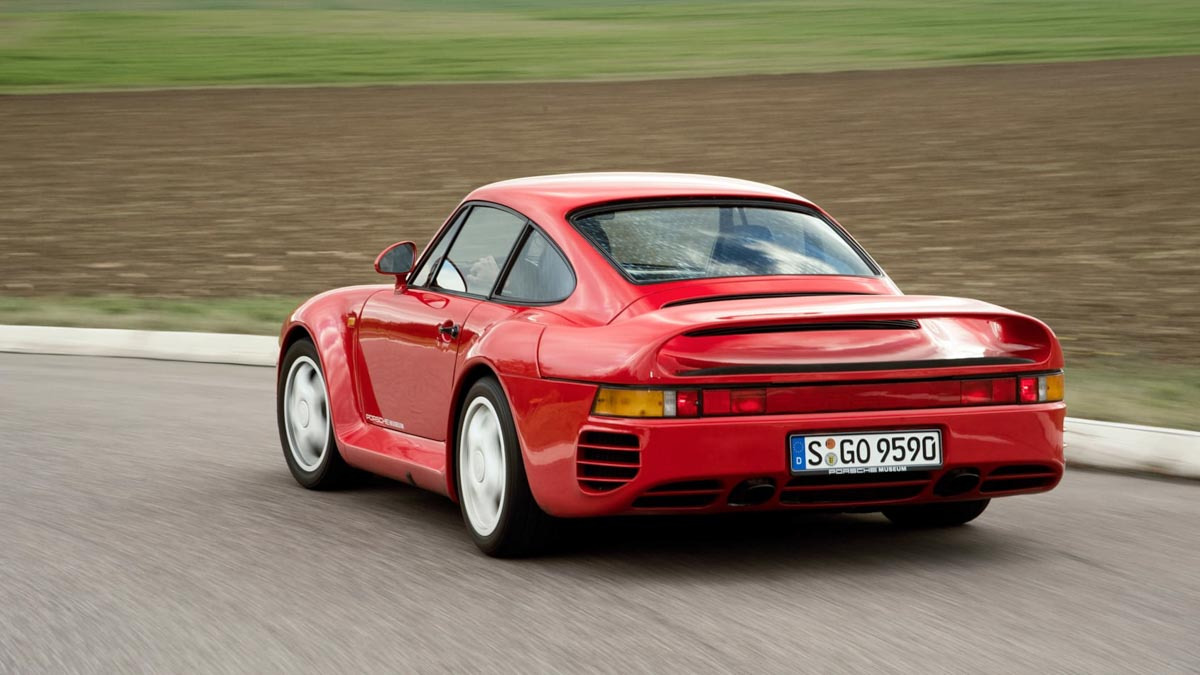 ‘The light that burns twice as bright burns half as long’ might have originated in ancient Chinese and came back into fashion in the film Bladerunner, but it could equally have been applied to the Group B era. It might have been short-lived, but part of its legacy was some awesome limited-run machinery, mainly from the world of rallying. But perhaps one of the brightest stars of the era was the glorious Porsche 959.

Built to take advantage of the pretty relaxed and laissez-faire Group B rules, the 959 was designed to compete on track against the likes of Ferrari’s 288 GTO. But after a lack of interest from other manufacturers the anticipated track side of the Group B era never materialised, and as Porsche didn’t want to enter the World Rally Championship the 959 was all dressed up with nowhere to go. Never mind the fact that development and production delays meant that the 959 didn’t actually see the road until the end of the Group B era…

It did have a brief competition history with a prototype winning the 1984 Paris-Dakar, while it also won the Rallye of the Pharaohs in 1985 before completing a one-two in the 1986 Paris-Dakar. Impressive feats, but what the 959 will be remembered for is providing one of the most impressive of all the 1980s driving experiences. The continual refinement and honing of the 911 theme was, in part, thanks to the technological advances Porsche made with the 959, and in particular its use of all-wheel drive that’s become such a staple for much of the range.

Development of the 959 started way back in 1981 and it was partially designed to see just how far the evergreen 911 could be developed. Porsche’s chief engineer at the time was Helmuth Bott and he managed to convince managing director Peter Schutz that all-wheel drive could be one way of extending the 911’s bloodline into the future and he set to designing an ultimate 911 that would also adhere to Group B rules.

A prototype, simply known as the Gruppe B, was shown at the 1983 Frankfurt motor show, and while there were glimpses of the contemporary 911 in the Gruppe B – the wheelbase, the roofline, the windows and doors, much of the interior – in truth the new model had little in common with Porsche’s perennial sports car.

The Gruppe B’s bodywork went through further developments – air vents in both the front and rear wheel housings as well as the air intakes in front of the rear wheels were added – and it was in this form that it made its debut as a production car at the 1985 Frankfurt show. Much of the hardware was as per the prototype.

Naturally enough the power plant would be a flat-six, with twin turbos, that was based on the unit used in Porsche’s 935/78 Le Mans racer, aka Moby Dick. Featuring water-cooled cylinder heads and an air-cooled block, its capacity was reduced to 2.85 litres and, to ensure a smooth, lag-free power delivery, equipped with a pair of sequential turbos, with the smaller turbo acting at low revs and both blowing higher up the rev range.

An impressive array of motorsport-inspired hardware such as titanium con rods, forged alloy pistons and Nikasil-lined cylinders helped the unit to produce a claimed 444bhp at 6500rpm. A maximum torque of 369lb ft was developed at a highish 5000rpm, but that all-wheel-drive traction helped it get off the line pretty sharpish – 0-100kph was a claimed 3.7sec and its top speed of 317kph made it the world’s fastest production car. Based on data received from sensors in each wheel, the computer-controlled Porsche-Steuer Kupplung (PSK) system could split torque 50:50 front/rear in slippery conditions, or at the other extreme send up to 80 per cent to the rear wheels under hard acceleration.

Despite its passing resemblance to the 911, the 959’s suspension was different to the run-of-the-mill 911’s, the latter’s MacPherson strut front and semi-trailing-arm rear set-up replaced by double wishbones at each corner, with two electronically adjustable dampers per wheel – one to control the firmness of the ride, the other to adjust the amount of ground clearance (the driver could choose from three settings for each, although the firmest and lowest settings would be selected automatically at speed). The 17-inch wheels were hollow-spoked magnesium alloy items fitted with Dunlop Denloc run-flat tyres – 235/45 VR17 up front and 255/40 VR17 at the rear – and a tyre-pressure monitoring system.

While the 959 might have obviously been derived from the 911 its familiar-looking panels were in different, lighter materials – the doors were aluminium rather than steel, as was the front boot lid, while the rest of the bodywork was Kevlar. Flared arches, linked on each side of the car by wide sill extensions, housed the Gruppe B’s wider track, while a more aerodynamic nose helped reduce drag and an adjustable rear wing controlled downforce.

Despite its high-tech hardware the 959 was pretty easy to drive, the combination of electronically controlled four-wheel drive, adjustable ride height and dampers as well as a twin-turbo motor and six-speed manual no more intimidating than driving a standard 911. And from behind the wheel the cockpit of the 959 didn’t feel all that different from that of its road-going 911 Turbo counterpart, even if the 959 carried a price tag that was three times higher.

While the 959’s interior might have had a reassuringly familiar feel for a Porsche owner, those coming to the brand for the first time might have felt it was a trifle sombre given the whopping price tag. There were no high-tech switches or instrumentation, drivers instead being greeted by a standard set of 911 instruments, albeit with a 340km/h speedo and a rev counter red-lined at 7300rpm hinting at the 959’s performance potential.

And while the 959’s interior might have been a little plain, there was nothing bland about its performance. Zero to 100kph in less than four seconds was pretty staggering back in the late 1980s, and its ability to put those numbers down no matter what the weather was hugely impressive, with the only other performance car of the time coming anywhere close in terms of all-weather usability being the Audi Quattro.

The 959, unlike the rest of the range, wasn’t assembled at Zuffenhausen, but was put together at Karosserie Baur, with Porsche inspectors keeping a close eye on quality control. Just 292 road-going production examples were made, and despite a nigh-on $190k price tag Porsche reputedly lost a similar figure on each example it sold. A loss leader then, but as halo cars go it was deeply impressive and demonstrated there was plenty of life left in the ‘old’ rear-engined 911 format.

For car enthusiasts of a certain age, me included, the 959 and the GTO hold some kind of mythical status. I would fall asleep staring at Athena posters of the cars on my wall, wondering if Jim would answer my letter and fix it for me to get a ride – just one ride – in a GTO or a 959 (Jim never replied, the git). I saw a 959 once on a school trip to Germany when I was 13. It was brown and overtook the school coach at something nearing warp speed. I was so overexcited that the teacher told me to calm down. ‘It’s only a car!’ the teacher said. ‘It’s not just a car,’ I blurted, ‘it’s a 959!’

First impressions are that the 959 is compact – shorter than a Cayman and marginally wider – but spacious inside. Its styling is absolutely ’80s, every edge softened and every protrusion blended-in. Aerodynamics and Cd drag factor were the key words of the decade, and the 959 excelled in both.

You sit in a classic 911 environment, many characteristics of which remain to this day. The wheel is upright, the pedals floor-hinged and the rev-counter centrally mounted. Even the gearknob shape will be familiar to 997 owners.

The engine catches first time and settles to a smooth idle with few vibrations, matched to that classic, busy, complex but distant flat-six engine note. Once warmed, the six-speed gearbox shifts smoothly and quickly and the progressiveness of the pedals puts you at ease instantly.

Curious noises enter the cabin at low speeds. The brake servo puffs underfoot and each sequential turbo signals its arrival with deep and strong exhalations. And when the second turbo kicks in, I challenge anyone not to release either a) a profanity, b) a childish ‘yee-ha!’ or c) both.

Contemporary reports claimed that the 959 exhibited no turbo lag, which isn’t exactly true by modern standards. When you nail the throttle there is a brief pause before both turbos align and deliver full boost, but it serves only to exaggerate the devastating accelerative feeling – indeed the 959 feels every bit as fierce as a current 997 Turbo.

It’s devastatingly effective in the corners too, even by modern standards. The softest of the three-stage switchable damping settings amplifies the 911’s characteristic front-to-rear pitch-shift over undulations, and there’s barely any noticeable difference between the medium and hardest options. But pick up the pace and with the halfway setting selected the car starts to flow. The 959 needs speed for all its technical features to come into their own, although the owner of this car says the opposite is true on a racetrack, where understeer prevails and only a brutish effort to induce oversteer can quell it – as frightened 959 customers discovered in the mid-’80s during demonstration drives at the hands of a certain Derek Bell.

Like a hammer-thrower losing balance, exceed the 959’s limits and you face an almighty tussle with rotational mass and gravity, which is why on the road you find yourself driving to the car’s strengths. You use the shocking acceleration and total traction out of corners to make fast progress and you tune your senses to receive as much information as possible through the sublime steering in order to determine just how much grip is on offer. It’s a challenge of matching human inputs to mechanical reactions with the added fear-factor of knowing that if you get it wrong, no type of period ’80s torque-splitting four-wheel drive, ABS and switchable damping will save you from a huge bill.