Just bought yourself a Bugatti Veyron? The Veyron-exclusive Parmigiani Fleurier Bugatti Super Sport might be just the watch you’re looking for. 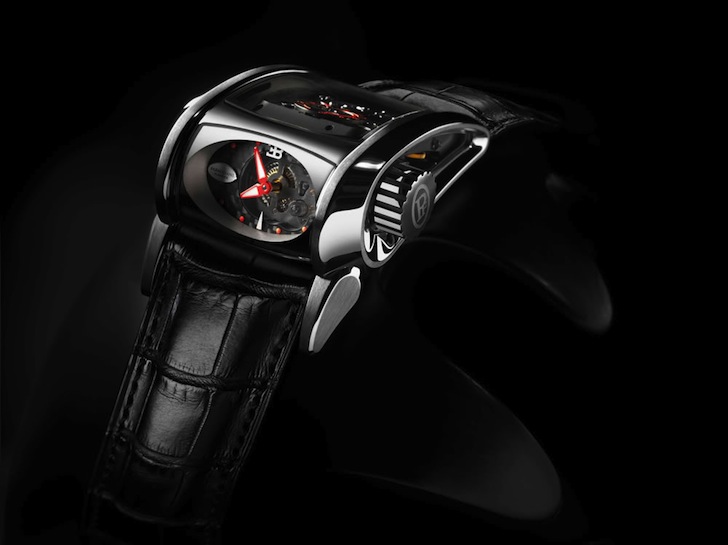 Here’s a scenario for you to consider. Your brand new Bugatti Veyron Grand Sport Vitesse, Sang Noir, 16.4 Special Edition and/or Grand Sport by Bernar Vernet has just arrived and is now sitting on the drive impatiently, waiting for its debut cruise through town. That in itself requires a few things: a full tank of fuel; the right playlist on your iPod (thrash metal probably doesn’t cut it), an impeccably ironed Armani shirt with matching Laurent Dufourg haircut; limited edition Ray Bans and an open window through you can drape your left arm nonchalantly.

Now, here’s the question: what watch would you wear? Richard Mille? Nope. Armani? Not quite. Rolex? Uh uh. Casio? Now you’re just being silly. This scenario requires the Parmigiani Fleurier Bugatti Super Sport, a timepiece made for and aimed at Bugatti Veyron owners.

Let’s just get this out of the way: it costs $375,000. A hyperventilating amount. Put another way, that’s enough to buy you a McLaren MP4-12C and STILL have enough left over for a new Mercedes-Benz GL 500 with GCC Package. And they say style costs nothing…

So what do you get from this ‘bargain’ aside from a wallet screaming for mercy? Exclusivity for one, since only 30 examples of the Bugatti Super – which will be available in either Rose Gold or Titanium – will be made. Inspired by the side-mounted drivers watches of the 1920s/30s, these 30 each comprise a quite incredible 333 individual mechanics as well as six sapphire crystals. As an example of micro-engineering (i.e. fiddly) the watch incorporates a 36mm by 50mm teardrop-shaped case so that you can read the time without moving your hand from the steering wheel.

The perfect edition then to this scenario then. Just remember not to scratch the paintwork with your nonchalant arm trailing out the window. We’re unsure what maintenance costs would be, aside from eye watering.