Our Long Drive Home. Balls to the wall. UK to Australia

Mike and Jess ditch the Renault Clio for 6.30am starts at the visa office, Mongolian scenery and a 131-ft Genghis Khan statue. Oh, and horse testicles.

After a few days in Ulaanbaatar we have finally gotten all the dust out of our ears and are starting to feel normal again. That said, we can hardly rest on our laurels. First order of business was to ensure our safe passage into China.

We think it would be great if we didn’t have to fly, so we are going to try to get the train through China, and then head into to South East Asia via Laos or Vietnam. For that we need two things: visas and transport. We can’t get the Trans-Siberian Railway as it is fully booked until mid-September. Mongolia though does have a rail line that can take us to the border, where we can walk over to China and then get a bus to the high-speed rail.

So we had to figure out how to get a visa on the road, and on the surface the process is really simple: take your passport to the embassy of the country you wish to visit, fill in a form with the details of your intended trip and give them a bit of money. You also need an alarm clock, because although the place opens at 9.30am for three days of the week, all the Mongolian kids want to study in China. So, you are warned to get there nice and early (specifically 6am in the Lonely Planet guide) to avoid the queues. 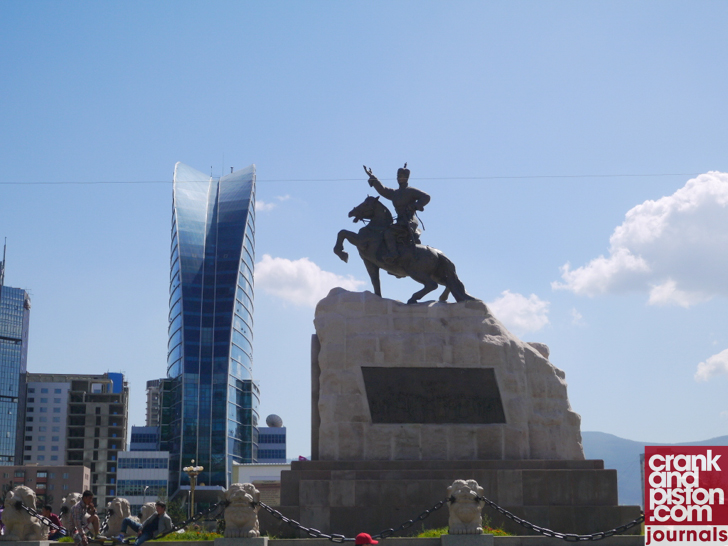 I’m not sure if you’ve ever tried it but waiting outside an embassy in the early hours, even in summer time, is bloody cold. There we were on a Wednesday morning waiting more than three hours for the embassy to open. We filled in the forms only to be told we were missing a Letter of Invitation from the Chinese hotel we had booked. This was not something we were previously warned about, and it was a long sulky walk back to the hotel to send off some emails. Invitations in-hand, we returned to the embassy on Friday – at a leisurely 6.30am – to try again. This time we were more successful, but to complete the visa process the embassy has to hold onto our passports a further four days. Hopefully then we will be leaving Ulaanbaatar for China on Tuesday.

With our visas being processed and train tickets purchased, we opted to get some things done that we have been putting off: eating testicles. It was an odd request to ask our tour operator – the lovely Meg – but we have obligations to some of our sponsors, who have requested (with a cash incentive) that we eat this part of a goat, a bull or a horse. Eventually she smiled and said, “Would horse testicle sausage be okay?” Not a question I’ve ever been asked, but we agreed it was equally as disgusting and that our sponsors probably wouldn’t quibble. So the next day we picked up a group of five hungover but hilarious Australians and headed out with Meg to the roadside stalls just past the Genghis Khan Equestrian Statue – about an hour east of Ulaanbaatar – where we had been told such delicacies were served.

The statue – which stands a whopping 131-feet tall – was built in 2006 to mark the 800th anniversary of ‘Chinngis Khaan’ uniting the Mongolian tribes as one nation which sounds like a good enough reason to celebrate the man as any. The only problem with the statue is that you are able to climb up through his legs, which – if legend is correct – is not unfamiliar for women in the region. This little process seems to cheapen it a little bit, and make the statue look as though it is going to come alive and fight Iron Man at any minute.

As we pulled up and got close all we could look at was this very fatty, thick-skinned red sausage sizzling on a homemade barbeque. A deal was a deal though and we ordered our testicle sausage, with a side of mare’s milk. And unfortunately for those who wanted to see us squirm, it turns out horse testicles actually taste quite good. Oily, a bit beefy, and almost like chewy mackerel, but all in all not bad. Mare’s milk, however, is fermented horse milk and tastes like fizzy stale yoghurt. It’s also incredibly hard to swallow, especially with testicles already in your mouth. Videos will be uploaded when we get a better Wi-Fi connection.

After this enlightening ‘experience’, we headed off for some real food in a national park with a local family, which included stone-baked mutton and vegetables. Truly, this was one of the best meals we have had so far. We topped the day off with a few drinks on a Mongolian hillside and listened to the music playing at a wedding on the other side of the valley. An incredible end to a memorable day, and we’ll be sorry to say goodbye to Mongolia. But the next step of our journey takes us to China, and there’s still a long way to go.