Deputy editor James gets his first taste of Vauxhall machinery with the Opel Insignia OPC.

I’m a little embarrassed to admit this, but before today I had never driven an Opel, and I do perhaps wonder if my 17-year-old driving days were missing that ounce of added lairiness that came with a Vauxhall/Opel coupe or saloon. Today I’m hoping to find out.

My chariot, kindly provided by Opel and Liberty Automobiles, is a 2013 Opel Insignia OPC. Or Insignia ‘Opel Performance Centre’. Or ‘holy crap, the speed!’ in modern idiom, as crankandpiston’s Phill Tromans discovered when he took the Corsa OPC for a thrash on Jebel Hafeet. Going strong since 2008, the Insignia remains one of Vaux-Op-hall’s best selling models, and it’s not that hard to see why. Under the bonnet lies a 2.8-litre turbocharged V6 that in this performance-focused OPC version chucks out a sizeable 325hp and 321lb ft of torque, some 155hp and 26lb ft up on the standard four-door ‘Notchback’ model. 0-100kph is sliced through in just six seconds, and the electronically limited top speed can be upped from 250kph to 270kph if you opt for the slightly pricier OPC Unlimited Pack. What we potentially have here then is an Opel-labelled rocketship.

Of course you’d be forgiven for missing this on looks alone. The Insignia is far from ugly, the undulating curves and strong bodylines creating a very clean design. I’m particularly fond of the frowning headlights and subtly carved air intakes on our appropriately-named ‘Power Red’ model, as well as the 20-inch aluminium wheels and diamond-shaped dual exhaust pipes. But then those three magic letters – O, P and C – hone into view, and I do wonder if perhaps the Insignia could, or indeed should, look a bit sportier. 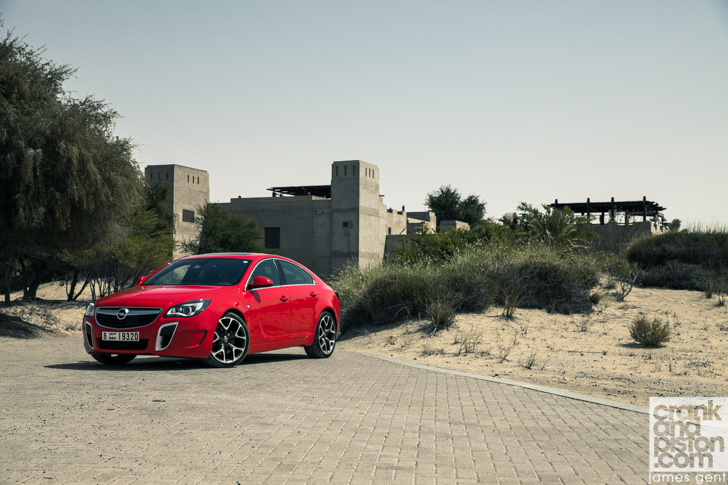 This theory is blasted completely out of the water on the inside however, where give or take a few plasticky panels, the effect is superb. Beautiful stitched upholstery goes hand-in-hand with a minimalist centre console, leather trim and full-road rage Recaro sports seats, which prove to be as comfortable as they are supportive. There’s also plenty of head and legroom, a panoramic sunroof, and an excellent driving position that finds the right balance between comfort and stiff: slip into the driver’s seat and you suddenly feel compelled to throw the Insignia about by the scruff of the neck, simply because it feels… right.

And all this makes the almost civilised drive that much more confusing when you do eventually get going. Sure there’s poke and plenty of it from the warbling V6, but there’s less drama than the sporty interior and chrome-detailed front bumper might suggest. You find yourself sinking deeper into the Recaros and watching the digital speedometer tick higher and higher. It’s almost serene.

That is of course until you stumble across the button marked ‘OPC’. This may take a few kilometres to find since, rather bizarrely, it’s been mounted next to the hazard warning lights on top of the dashboard rather than next to the gear-lever where one might expect to find it. Click the OPC button though – there’s ‘Sport’ too, but let’s dive straight into the deep end – and the digital speedo disappears, an analogue needle and red hue appearing in its place on the instrument panel. The V6 – now mapped for more precise throttle response – revs higher and more aggressively, daring you to plant the right boot. Which, naturally, you do. 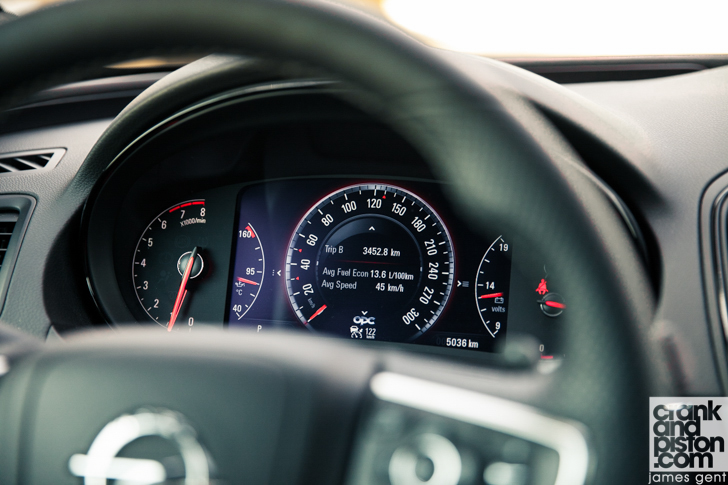 Forget first gear (which feels a little dosey), the excitement really kicks in when you hammer home second with the six-speed automatic paddles. The changes are crisp if not rapid, but the invigorated oomph from the engine – even in the lower revs – is addictive. Full linear acceleration pulls you almost effortlessly towards the redline, your mind suddenly confused by the landscape whizzing past quicker than it was just a few seconds earlier. The engine noise does get a little whiny in the higher revs, a sound that manages to crack the very impressive acoustics in the cabin. But a flick of the right paddle, accompanied by a very tangible ‘whallop’ as the engine drops you into third and back into the lower revs brings the dynamism right back into play. Fortunately there’s plenty of travel through the brake pedal to stop the Insignia pitching itself into the sand.

I’d love to tell you how the all-wheel 325hp Opel Insignia OPC handles the corners, but a highway-heavy test-drive curtails that. There’s no doubting though that there’s plenty of heft at the wheel, which gets even weightier when the OPC button is pushed. It’s not as crisp or direct as say an Audi A4 might be, but the extra weight requires manhandling and really makes you feel like part of the drive (you’ve got to earn those Recaros somehow). There’s seemingly plenty of grip through the tyres too, the all-wheel drive system allowing a smoother transition of power to the road surface. 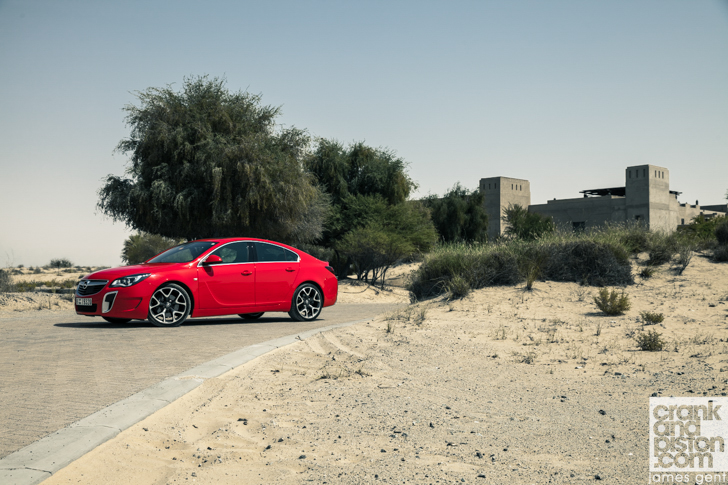 So my first Vaux-Op-hall drive goes in many ways as I expected. The ride is comfortable, the styling smart if not flamboyant, and the sporty interior feels immediately comfortable. But the OPC nature of the Insignia has caught me off-guard. There’s energy, and even excitement, the whole drive becoming an occasion seemingly out of nowhere.

I’m beginning to wonder if my 17-year-old self missed a trick.