On track in Audi R8 V10 Plus. FIRST DRIVE

The best Audi R8 just got better. And we tried it on track.

The Audi R8 isn’t new – anyone that knows anything about cars will know about the Lamborghini Gallardo-derived supercar that appeared first with a V8 and then with a V10, bringing a snarling dose of monstrous performance to the German brand.

But this isn’t just any R8, this is the latest R8 V10 Plus, the ultimately honed version of Audi’s flagship fun car. It’s the culmination of little tweaks, improvements here and there since the first R8 back in 2007, and, according to Audi anyway, it’s the best of the best.

Well, we’ll be the judge of that. Today we get a chance to drive it on home turf in the Middle East. Not on the roads – we’ll get to that – but on the track at the Dubai Autodrome*. Not many brands are confident enough to let hamfisted journalists hoon around a race track in this region, and having seen some of them drive we completely understand why. But Audi runs plenty of its cars at the Autodrome as part of a commercial tie-up that lets the public have a go. So what better place to show off all those years of R8 evolution?

The spec list is impressive. The R8 V10 Plus has more power, less weight (down to 1570kg) and a more dynamic focus than its already sharp predecessors. It also ditches the rather horrible old clunk R Tronic robotised manual gearbox and at least replaces it with a double-clutch seven-speed S tronic affair, which on paper reduces the 0-100kph speed by 0.3 seconds on its own. That helps it to a sprint time of just 3.5 seconds thanks to Quattro all-wheel drive and a mid-mounted 5.2-litre V10 with 542bhp.

Visually, the R8 V10 Plus is familiar, but there are some tasty little tweaks. Check out the LED indicators, which Audi describes as “dynamic”. Basically, when operated the light flows from one side to the other, much in the style of the Ford Mustang. But cooler.

There’s also a good lashing of carbon, both the on the exterior – the mirrors, the lining of the engine bay visible through the rear scree – and inside on the dashboard. The carbon ‘blades’ on the side of the car are wider than before, and the front grille has been redesigned for a tighter, more contemporary shape.

Open the door, and settle in the driver’s seat. It doesn’t adjust as low as I like – at six-foot tall I’m not huge, but my head is brushing the roof and when I put a helmet on, I have to seriously slouch. But the chair is hugging and well-cushioned, so that it feels like you could throw the car around without falling out, but at the same time sit in comfort for the commute.

It’s kind of hard to hear the exhaust note through the helmet, but it’s there, and it’s pretty epic when I flex the throttle; that multi-toned timbre that only comes from two banks of multiple cylinders, made thicker when there’s 10 in total. The slightly weird gearstick configuration carries over from the R-Tronic – in the ‘neutral’ position it’s actually in P, and a click to the left engages Auto mode. Click right for reverse. To put it in park, you just turn the engine off with first engaged.

Out of the pitlane, and hit the gas. Woooof. The V10 has power everywhere but it pulls hardest the closer you get to the red line, and as it’s sent to all four wheels, it rockets forward with a bellow. Braking hard into the right-hander at turn one, click it down to third with the paddles. There’s that new gearbox at work – much faster, much smoother than the old box, and steering that weights up beautifully. I have to resist the urge to get on the power through the bends too early, as a hopeful poke will see the front wheels drag the car off line, but once the nose is into the apex I can get on the power, hear that noise from behind my head and properly haul ass.

There’s no fancy adaptive suspension on the V10 Plus, just ‘regular’ dampers, and it’s judged really well, at least on this smooth surface. There’s the merest hint of lean, enough to let you play with the car’s weight and momentum and use the throttle to adjust cornering lines. It feels superbly balanced, never like it’s about to bite. And anyway, we’re under strict instructions not to turn the ESP off – try and push in a touch too hard and the electronic reins are applied before the back can slide more than a few millimetres.

Huge carbon ceramic brakes lurk behind the big alloys, and the stopping power is seriously impressive. Stamp on them and ABS will bring you to a controlled stop, but they’re more effective with a bit of finesse, the pedal beautifully calibrated to allow a firm squeeze that strains you forward into the seatbelt.

With the possible exception of the ultra-rare R8 GT, the R8 V10 Plus is the pinnacle of Audi’s everyday supercar. It keeps the luxury and quality that Audi is renowned for, and builds on the already impressive performance we’ve seen since its inception. It’s comfortable enough to use every day, but take it on a track and it’s a properly engaging yet accessible experience – not scary, but with enough challenges to provide a learning experience over time. Now, all we need to do is get one out on the road.

*Obviously the pics are not from the Autodrome, but they look better than the shots taken on the day. 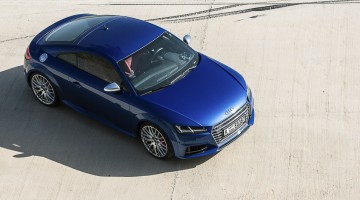