That’s a good 250 kilometres of tyre melting asphalt beneath our wheels already. In an attempt to get our heart rates and adrenaline levels down a tad, the good people at Mercedes suggest we take a break from 577bhp and sample the slightly less bonkers, but much cheaper E 500 (although a Middle East price isn’t confirmed yet).

Does it offer the same thrills as the AMG version? Well no, obviously. That’s why you pay the extra money for Affalterbach’s finest, which comes in at $135,300. The standard E-Class is much more geared towards cruising than the balls-out E63 AMG, but that doesn’t mean it’s not good. It is.

This time we leave the winding stretches of tarmac through the Catalonian mountainscape and take the route less travelled via Sant Cugat Del Valles, Martorell and Vilafranca Del Penedes. That’s a good 200 clicks of smooth meandering road network, and a solid three hours in the multicontour massaging seats.

The revised 2013 model E-Class is available in a range of flavours – the 2-litre, four-cylinder E 200 starts the ladder, which climbs in increments of 50 through the E 250, E 300, E 350 and then jumps straight to this, the 4.7-litre V8-powered E 500. The top of the non-AMG foodchain produces a non-inconsiderable 402bhp, which at least guarantees it won’t be slow. And indeed the biturbo V8 thrusts the E 500 to 100kph in 5.2 seconds when it’s powering the rear wheels, as in the car we drove. It’s also available with all-wheel drive, which doesn’t affect the acceleration.

So what’s it like? Looks wise, it varies depending on its trim level. The Elegance spec sees a more traditional grille and the badge mounted on the bonnet, while the Avantgarde model has a more dynamic two-barred grille and the big three pointed star mounted in the middle. To my eye, this is the more attractive option. The 2013 update also sees new LED lights front and back, and inside the centre console has been revised although remains button heavy.

Compared to the E 63, the E 500 is more sedate, both in pace and character, with more laconic steering and softer ride, but the engine still impresses, summoning up 272lb ft of torque from just 1600rpm to effortlessly push the car forward. The gearbox remains a small sticking point though – it works, but there’s not enough dynamism to it. You could, however, make the argument that it’s more suited to the E 500 in that respect. 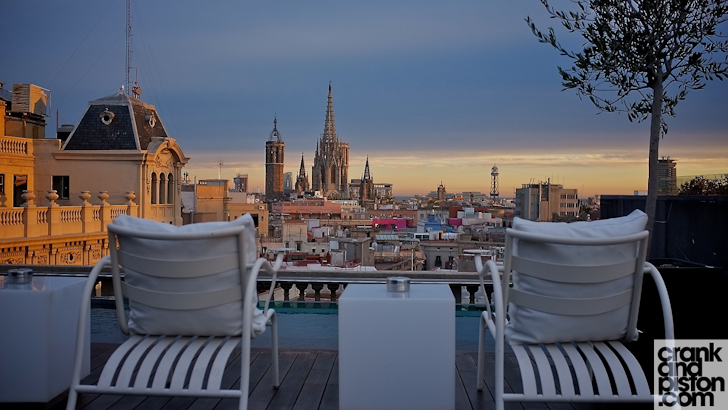 Handling wise, the E 500 doesn’t encourage pressing on, but it’s a superb cruiser, soaking up anything modern roads have to offer. Explore the limits and things get a bit soft, lacking a bit of sharpness and the chassis has a tendency towards understeer. It’s a comfortable cruise-mobile but handles well, considering the car’s weight. It does every perfectly well, it’s well built and keep road noise to a minimal.

Ultimately, the new Mercedes E 500 is what it is – an E-class with a lot of poke. It doesn’t have a great deal of sporting prowess but for demolishing hundreds of kilometres at a time, and with the capability to do it quickly, it’s extremely good.

– CHECK OUT OUR FULL GALLERY OF IMAGES HERE – CLICK –