crankandpiston heads to Barcelona to sample both the brand new Mercedes-Benz E-Class and its always mental E 63 AMG brethren on the winding stretches of Spanish tarmac. 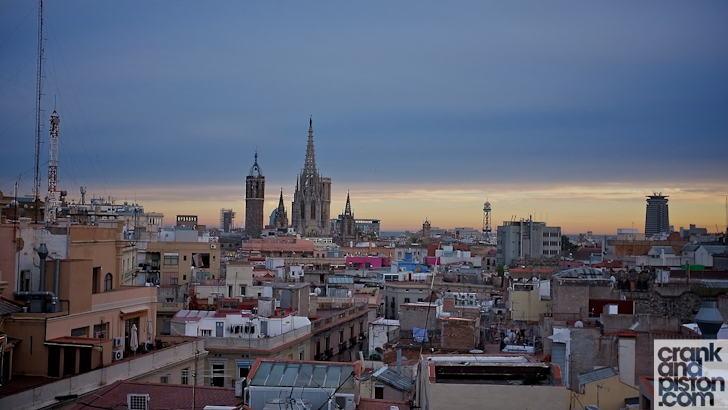 As much as I enjoy a visit to Barcelona (a few days on the Costa del Anything usually helps work the knots out), there are a couple of things guaranteed to set the hairs on the back of my neck aflutter. The myriad of side streets for instance usually steals a few hours of my life while I try to retrieve my bearings. Probably the most nerve-jangling element of the city though is the manner in which a lot of the city’s motorists park their cars: alloys and bumpers alike are dealt with without mercy.

The result? Possible dented body panels and scratched paintwork. The ‘when in Rome, do as the Romans do’ philosophy is all well and good, but considering crankandpiston is in Northern Spain to test the brand new E-Class (four years after the ninth-generation W212 rolled out the gates in Stuttgart), I’m unsure how well this will go down with our genial hosts Mercedes-Benz. Indeed, given the work that has gone into the redesign, the prospect of returning the luxury saloon in less than perfect condition makes me feel a little lightheaded.

There’s a new look common to the theme shared across the whole E-Class range, which means new lights, grille and front apron, as well as revised rear lights above two sets of twin chrome tailpipes on this, the top-of-the-range E 63 AMG S-Model. The S-Model gets a silver front splitter and a lip spoiler painted in the main exterior colour, as well as black chrome bits on the bumpers. The result is a machine wider and more aggressive than the standard E-Class, and even the standard E 63.

Inside, it’s more sober, although the S-Model does also get silver seat belts to differentiate itself. Aside from that and some fancy embossed headrests, it’s a standard Mercedes interior, even if there are bits of carbon fibre and aluminium dotted about the place. That’s not necessarily a bad thing – the quality inside a Merc has come on tremendously in recent years – but it’s not as evocative as perhaps it could have been.

The engine under the bonnet remains a 5.5-litre biturbo V8. The S-Model gets more power from it than the regular E 63 AMG, up from 550bhp to 577bhp thanks to increased boost pressure, and torque rises from 531lb ft to a stonking 590lb ft. All that extra power, heading through all four wheels, means 100kph comes up in just 3.6 seconds. That’s well into supercar territory, despite the extra 70kg that all-wheel drive brings with it. In fact, it’s faster than the SLS AMG.

Press the start button inside and there’s a deep rumbling roar from the exhausts. The engine and exhaust sound is very distinctive to AMG, almost muscle car-like and evocative of virtually all past models. The most notable of changes that have been made on the new S-Model (which we’ll explore in depth on our journey across Catalonia) is the introduction of all-wheel drive. It’s the first time an E-class AMG hasn’t been driven from the rear, as the E500 continues to do. What kind of an effect will it have on the car’s character?

Put all the settings in comfort and you could almost be in an E 500, but firm up the suspension, twist the gearbox controls to manual and put your foot down – there’s no doubt then that you’re in command of serious performance. This thing really, really moves. The introduction of driven front wheels brings a newfound ability for the car to haul itself with pace and stability towards the horizon. It’s altered, but not completely changed the E 63. As before the steering is direct and you can really throw it into corners, but where in the rear-wheel drive model attempts to get on the gas early would result in a twitchy rear end, now there’s immediate grip and go, with a hint of understeer, despite the 33:67 torque bias towards the back. 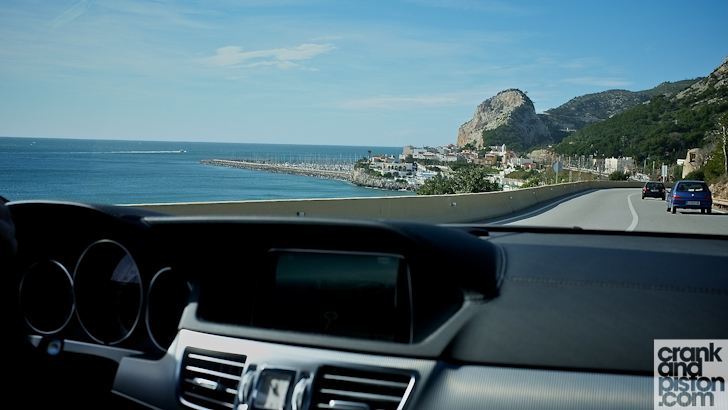 That said, on the twisty roads just outside Terrassa, the E 63 AMG changed direction beautifully, carrying its speed through the corners with confidence. It’s happy being pushed hard. You always have to keep in mind that it weighs 1940kg and has close to 600bhp, but at the same time it’s very easy to drive at about eight-tenths. The steering – faster and heavier than in the standard E-Class – is direct and perfect for maintaining confidence in what the car is doing.

The engine, as we already knew, is incredible, with vast swathes of torque and power available wherever you want it. The gearbox isn’t quite as good though – the E 63 AMG comes with Merc’s seven-speed MCT, and it isn’t as sharp and tactile as the DCT unit found in the SLS – its almost too smooth for this type of car. This new E 63 AMG combines the best of both worlds. It’s capable of being the relaxed, comfortable cruiser like the standard car upon which it’s based. But twist a few dials and weight up your right foot, and you’ll find a car with astonishing power and capability. Only the gearbox slightly lets it down, but really, only slightly. Ultimately, this is a five-star supercar in a saloon’s body.