crankandpiston.com hits the Portuguese canyons and the terrifyingly fast Algarve circuit in the brand new M4. No, new M3. No, hang on, M4. No…

This spring has been incredible. An unprecedented embarrassment of riches for performance car fanatics, the past couple of months have seen a plethora of mind blowing new models being launched to an appreciative group of fortunate motoring hacks the world over. McLaren 650S, Lamborghini Huracán, BMW i8, Jaguar F-Type Coupé, Porsche Boxster GTS and Cayman GTS, as well as the gorgeous new Targa and, for the very fortunate few, the LaFerrari – all driven for the first time in the past seven weeks. It’s been a blast – an incredible collection of ‘pinch me, I must be dreaming’ moments that cannot help but leave us all grinning like buffoons.

But the weight of expectation is surely heaped most on the heads of two, comparatively mundane looking, German efforts in the lithesome forms of BMW’s all-new M3 and M4 mentalists. As a great leveler, the original (E30 generation) M3 of 1985, despite its engine being short of at least a couple of cylinders and its gearbox missing at least two cogs compared to current models, takes some beating.

It has, in the 22 years since its passing, come to be revered by driving enthusiasts as one of the all-time greats – a car that rewards like few others, with handling that reminds anyone fortunate to drive one what piloting a great car should be all about. It’s still the most successful touring car in history and, as good as its successors have been in their own rights (some better than others, mind), nothing has come close to that diminutive, boxy original. 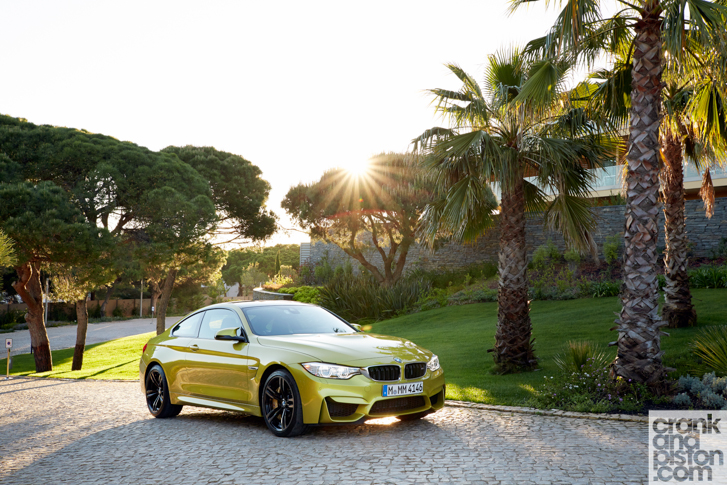 With a heritage like that, it’s little wonder that BMW has spent four years developing the new one. That’s right. Four. Entire. Years. And, in that time, the company decided upon a frankly baffling new series of nomenclature for its cars, with four-door models having odd numbers and two-door cars having even numbers – unless it happens to be a 6 Series Gran Coupé, which retains its even number status despite its extra apertures. It must have seemed like such a good idea at the time but the confusion it causes us when we come face-to-face with the new M cars outside our Portugese hotel is comical.

I’m handed the key fob to an M4 and head out to find it. Walking past the assembled cars, I actually argue the toss with one of BMW’s people, stating that my car definitely isn’t there. In my diseased brain, you see, I have come to the understanding that the number four relates to the doors on offer. “That would be the M3, sir,” comes the exasperated reply. “Your car is definitely there.” 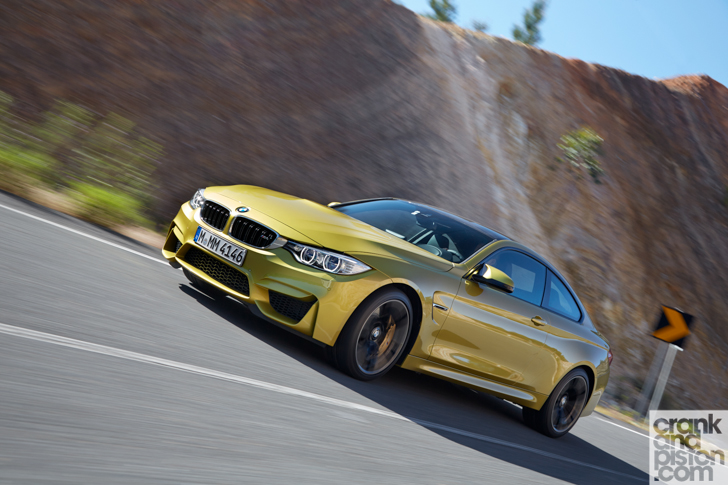 Visually there is much to like here, no matter your opinion on the paint job. The M4 looks purposeful, mean, wide and squat, while the M3 is slightly taller and looks marginally narrower as a result, particularly from the rear, which is a damned sexy as ever, on either model.

The two share the same engineering, the same specifications (except for certain physical dimensions) and the same performance statistics, with BMW’s engineering guys claiming that they both put in the same lap times at the ’Ring. So, for the sake of simplicity, let’s examine the M4 and only chime in with M3 stuff when there’s a difference between the two cars that’s worth mentioning – it’ll be far simpler for all of us.

Underneath the car’s bulging bonnet beats an engine that’s been subject to the usual downsizing. The previous, E92-generation M3 was gifted with a four-litre, naturally-aspirated V8, which has been shrunk by a whole litre and two cylinders, all of which are now back in line. But what we do have is two ‘mono-scroll’ turbochargers, which give the new M3/M4 better performance than any of their predecessors, even if there’s a slight danger of less character being on offer as a result. 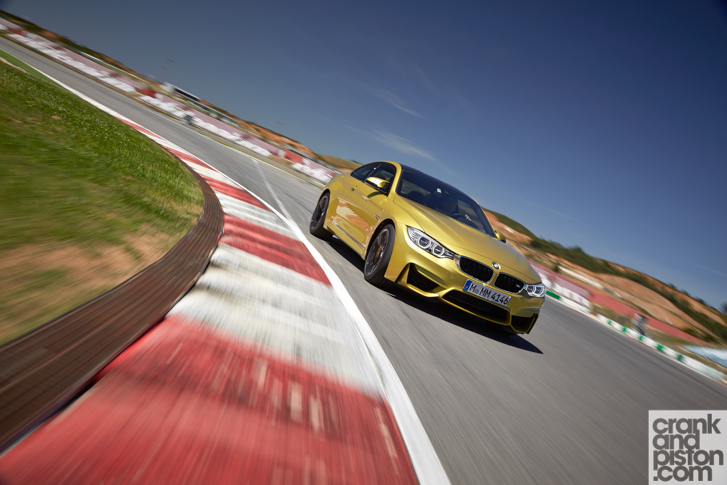 So, to the stats: Six cylinders, two turbos, 550Nm of twist, 431 horses (DIN), two driven wheels (the correct ones) and one carbon fibre driveshaft transferring all that power and torque from the engine up front to the rubber at the rear. Oh, and lest we forget, there’s the small matter of the 0-100kph dash being done in just 4.1 seconds (with the DSG tranny, 4.3 with the slick manual), an electronically limited 250kph top end and a standing kilometre time of just 22 seconds – a time that trounces that of the previous V8-powered M3 by one and a half seconds.

Make no mistake, the M3 and M4 have serious performance credentials but it’s how they interpret and deliver those figures through the seat of a driver’s pants that really matters. There’s an afternoon to be spent on the twisting canyon roads that snake across the mountains near Faro, followed tomorrow by a few hours at one of the most technically challenging race circuits anywhere in the world. Game on.