We take the new 616bhp Bentley Flying Spur – the most powerful four-door Bentley ever produced – for a high-speed drive.

Times are clearly changing at Bentley with the launch of the new GT3 racer and the EXP-9 SUV, which has now been confirmed for production. Even the now ten year-old Continental GT has been spouting newer and faster editions as of late, the GT Speed amongst the most noteworthy. And then there’s the Flying Spur.

Named after a four-door saloon by the same name that debuted in 1957, the Continental Flying Spur slotted into Crewe’s line-up just beneath the über luxurious Arnage for those Bentley owners who could only afford quarter of a million dollar’s-worth of indulgence. Successfully too, with 20,000 models sold since 2005 and the Flying Spur establishing itself as a significant figure in the Bentley’s 22 percent growth last year. As we found with the previous gen – a 2010MY of which we somehow managed to wangle for a six-month long-term loan – the Continental Flying Spur is an extraordinary mix of raw power and refinement, but the time has come for the ‘Continental’ name to be given the boot and establish the Flying Spur as a stand alone model.

With that in mind, there have been significant changes to the exterior look. The Continental-esque look at the front remains as do the dual circular headlights (with jewel-like LEDs) subtly grooved bonnet and immaculately front mesh grille. Into the fold though comes a re-designed and lower front bumper, new 19-inch Classic alloys (with 20 and 21-inches and nine difference design options also available), and a new Flying B emblem above the front wheel arches. Then there’s the W12 badge on the C-pillar, a little showy for a Bentley, but both are done so delicately that it’s difficult not to like them. Ditto the new rear end, which boasts new horizontal taillights, less rounded bodylines and chromed elongated tailpipes. Whether the new svelte look is an improvement over the old is up for discussion, but it’s certainly a bold new style that demonstrates Bentley aren’t messing around.

Inside the differences are harder to spot. There’s the customary Bentley trademarks like the chromed air vent stalks, impossibly soft carpets, pristine leather made from only the finest bovine sacrifices, beautifully stitched upholstery and meticulously manufactured wood trim (for which, following my tour of the Bentley factory last year, my respect knows no bounds). It’s the on-board infotainment system though which has been given the much-needed shot in the arm. There’s updated sat-nav, a new eight-inch touchscreen in the centre console, wifi connectivity and a 64GB hard drive, two further 10-inch touchscreens mounted in the driver and passenger headrests, and a rather snazzy Touch Screen Remote – which is deployed from a new centre mounted rear console – for passengers to control climate control and multimedia. Technologically then it’s a huge leap.

Much can also be said about the 6.0-litre twin-turbocharged W12 engine under the bonnet. Despite being the same unit that powers its predecessor, an engine management upgrade to the W12 means power and torque have been upped to 616bhp and 590lb ft respectively. From the line – thanks also to a 40:60 torque split to the rear wheels for optimum traction – the new Flying Spur will hit 100kph in 4.6 seconds and a 322kph top speed. To put that in perspective, the new Flying Spur – the most powerful four-door Bentley ever manufactured – will hold its own against an Aston Martin V8 Vantage S. 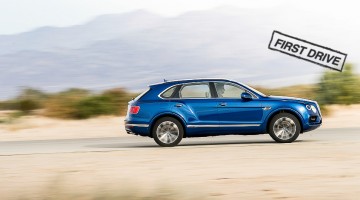